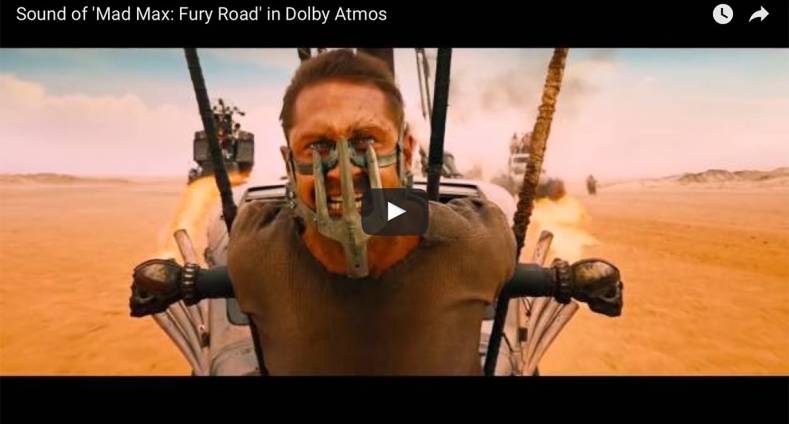 Since 2012 many moviegoers have been captivated by the nearly two thousand theaters throughout the world that have installed Dolby’s 3D immersive sound system called Dolby Atmos. Since then Dolby has worked to also make the technology available for live broadcasts, home theater systems and even stereo headphones.

Dolby's Atmos is all about engaging viewers’ auditory system in a more natural way. The system supports the efficient creation, distribution and delivery of 3-dimensional spatial audio using audio objects and metadata – as opposed to 1- or 2-dimensional channel-based audio experiences that are commonplace today. Dolby said its Atmos technology provides scalability to ensure optimized playback from the Cinema, Home Theatre through to mobile/headphone playback.

To date the biggest challenge has been live broadcasts, with lessons still being learned from several tests that have been done, and continue to be, around the world. The idea is to make the multi-channel 3D immersive audio technology available and practical for sports and entertainment producers.

“Dolby Atmos was always designed to be very scalable, with the understanding that there are a variety of devices and venues where people could enjoy the enhanced experience of Dolby Atmos.,” said Rob France, Senior Product Marketing Manager, Broadcast Audio, Dolby Laboratories, Inc. “There’s fundamentally two parts to Atmos: one is saying ‘let's change how the content is produced; let’s get away from mixing for a particular replay environment.’ The other part is saying ‘how do I replay that?’ Different environments will have different replay attributes, but Atmos encoding is the commonality among them.”

Dolby Atmos arrived in theatres in June 2012. Dolby Atmos in the home has been on the market for over a year (October 2014). The first Dolby Atmos mobile devices (headphones) began shipping in 2014 as well.

The Sound Of Actually Being There

The goal with Dolby Atmos is to transport listeners of all types into the story or game with constantly moving audio channels that flow all around you, creating a realism and an immersive sense of “being there” not previously found in previous generation 5.1 multi-channel surround sound systems. Many say it’s a more “three-dimensional effect.”

With Dolby Atmos, the different devices are prompted by special software to ensure a reliable playout. As new platforms come out, Dolby Atmos can migrate for different devices. For home theater systems, Dolby has worked with several device manufacturers including Yamaha and Samsung to make sound bars that are Dolby Atmos capable. The system also leverages 5.1 or 7.1 “Dolby Atmos Enabled” speakers that eliminate the need to mount speakers in the ceiling. The additional speaker requirement for Atmos is replicated by wirelessly reflecting sound off the ceiling using digital signal processing.

However it’s the live environment that Dolby is set on penetrating in a big way. NBC Sports is said to be considering some limited testing of Dolby Atmos content delivery during the upcoming Olympic Games in Brazil this summer.

Mixing Atmos Is The Same Only Different

“We’ve tested all parts of the chain,” France said. “We’re looking at how to use a more scalable channel approach, which Dolby Atmos allows us to deliver. Ultimately the ambiance mics capture audio in a channel-based way. The basic setup is the same, however, things like emphasizing the PA system at the game adds so much value to the broadcast.”

He added that setting up a Dolby Atmos capture system on the field does not require that much more equipment than a standard stereo or 5.1 set up. “All we’ve done is replace a standard 5.1 array mic with a 3D version. Because whether it’s Dolby Atmos for post production or Atmos for Live, the sound that you want to put across is the same. You just might want to accentuate different elements than you ever could before.”

Jurgen Scharpf, Senior A/V Mixer, Dolby Laboratories, agrees with that last point. He’s been an audio mixer for cinema but also tries his hand at live mixes every now and then. For him, many of the established methods that have been used in surround mixing have not really changed when doing an Atmos mix.

“You still use EQ and panners to sweeten the sound, he said, “but what’s different is that in Dolby Atmos you are adding a third dimension, using overhead surround speakers. That gets very exciting, both for the creative mixer and for the listener.”

For live broadcasts, Scharpf said it helps to bring in more ambient sounds, like crowds and PA systems, to add a sense of reality for the listener. Music is a bit easier to mix for overhead surround speakers. The overhead speakers also open new creative ways to mix music in surround: I often use them instead of the center speaker to set a midpoint that bridges the left and right side of the audio image, without crowding the dialog

“From a mixer’s point of view, you can have more ambiance and more location sound in the mix,” he said, “and still have the clarity so that you understand announcers and what’s happening on screen.”

As things progress, Scharpf said they expect producers to say, “now that I have this flexibility, I can use it to be more creative with my soundscape,” adding that Dolby Atmos adds value to any telecast, even one shot in HD.

Getting It To The Home

To date, Dolby Atmos can be delivered to the home using Dolby Digital Plus and Dolby TrueHD on Blu-ray in a way that is backwards compatible with existing players, as well as via OTT streaming. 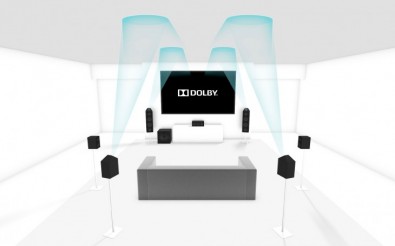 For home theater systems, Dolby has worked with several device manufacturers to make sound bars that are Dolby Atmos capable, which eliminate the need to mount speakers in the ceiling.

Whether you use the Atmos-enabled ceiling mounted speakers or Atmos-enabled speakers that point up and bounce the sound off the ceiling, the technology recreates the same 3D audio environment found in certified theaters.

Dolby has developed its “enhanced AC-3” codec (“eAC-3”) to accommodate OTT delivery of Dolby Atmos encoded files facilitating Dolby Atmos delivery via IP, and VUDU is already delivering Dolby Atmos content to viewers in the home. In another development, a newly designed called Dolby AC-4 codec has been granted “candidate status” for inclusion as a recommended immersive audio format for the emerging ATSC 3.0 TV broadcasting spec.

“There’s plenty of ways to get Dolby Atmos to the home,” said Jeffrey Riedmiller, VP of Technology, Sound Group, Office of the CTO, Dolby Laboratories, Inc., “and even more coming. Compared to competing 3D audio systems, Dolby Atmos goes much beyond core technology components. We are across the entire ecosystem of media creation and delivery. That includes broadcasters and cable providers. Dolby is the only company that has a broad and deep expertise across that entire chain. That gives us a strong advantage and customers a confidence knowing we’ll be there to help every step of the way.”

In an age of improved images, it makes sense that audio will have to catch up in order to keep content distributors competitive.

“When we talk to broadcasters and let them listen to a good Dolby Atmos system, they immediately get what it could bring to their telecasts,” France said. “And as broadcasters begin to distribute 4K images, they're saying, ‘I need better audio to match this great picture.’ Dolby Atmos makes that achievable.”