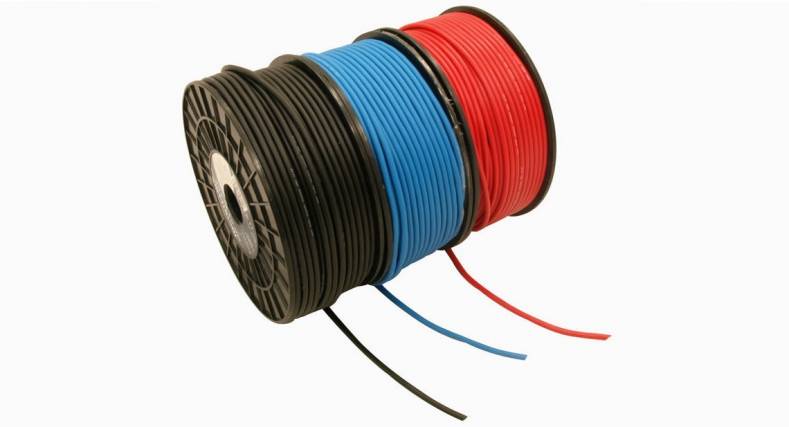 Microphone cables come in multiple colors, but it’s the inside construction that counts. (Image courtesy www.terralec.co.uk).

When most professionals think of copper or fiber optic cable for broadcast, studio, mobile units and computer technology, many think first of a trusted brand they know — mainly because they have learned to depend on it and feel cable is a mature, staple product.

For this reason, Belden — the iconic brand name in cable — offers more than 3,000 cable and connectivity products in its professional product line for applications as diverse as broadcasting, computers, audio, entertainment and security. Even within these categories, Belden offers multi-conductor, paired, coaxial and flat copper and multiple types of fiber optic cable. Plus they offer portable cordage, molded cable assemblies, hook-up and lead wire. The list goes on and on.

But beyond mainstream cable products, there lies high-end, custom-made niche cable for special applications as well as cheaply made cable in China for the budget conscious. And there are connectors — a few quality brands known and trusted throughout the world and literally hundreds of sub-standard connectors made in China that look identical to the high-quality ones.

For cable and connectors, it’s important for end users to know your application and what cable works best for it. Take audio cables, for example. There are dozens of brands of good cables and a few superior ones. One of the top brands in the world is Mogami Wire and Cable, a specialty company that makes both audio and video cables. 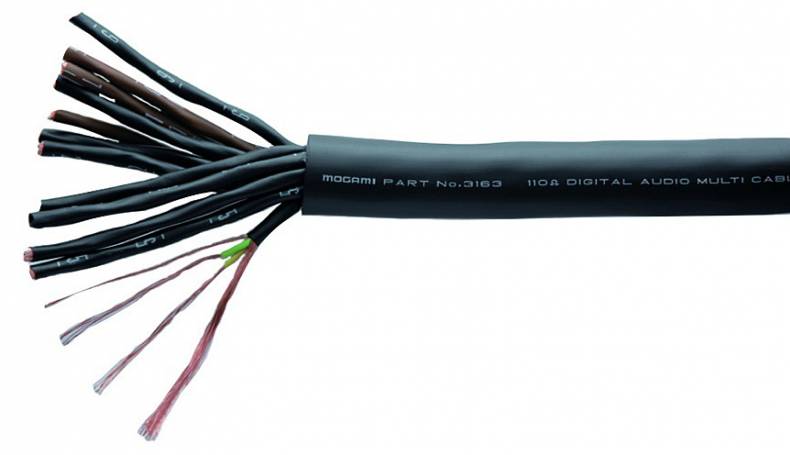 Housed in a single-story facility in Nagano, Japan, Mogami is a boutique business with 20 employees led by the company’s founder, Koichi Hirabayashi. His high-quality cables are based on his own break-through designs in cable technology.

In the audio world, virtually every major recording studio is wired with some Mogami products, which means that just about any recorded music we hear today has passed through Mogami cable somewhere in the recording chain.

Hirabayashi invested years into researching low-loss signal transfer, the result of which lead to the development of Mogami Neglex, a series of cables that transformed the audio industry. The story began decades ago when Hirabayashi began researching the causes of audible differences within signal cable. At the time, most engineers thought all cable sounded the same. 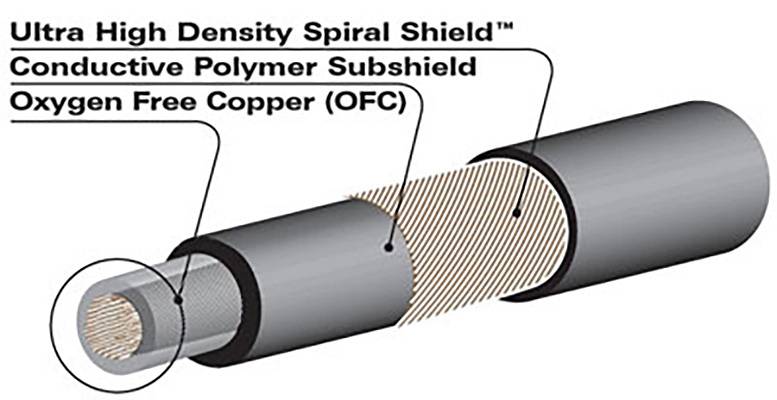 “Mogami is known for its spiral shielding,” said Phil Tennison, product manager for Mogami retail products, which are distributed by Marshall Electronics. “In any audio cable with current going through a conductor, a magnetic field is created that interacts with nearby conductors. The nature of that shield affects the tone and the accuracy of what’s happening below that shield. Mogami’s shield is different from what’s made by most cable manufacturers.”

While Tennison said Belden cable is perfectly good for many standard installations, he noted that Mogami creates niche products for special applications where high performance is demanded. These include Mogami’s quad-shielded Studio cable for audio recording studios, rugged Stage audio cable for touring musicians and entertainment shows, high current Tube cable for tube microphones, special miniature lavalier cable for small microphones and Polarflex microphone cable for extremely cold environments. Video crews who work in Alaska and at the North Pole use Mogami’s Polarfex, which is rated to withstand temperatures of 40 degrees below zero.

Each cable design, he said, is purpose built for the application in which it is used. There are compromises inherent in each design. While the studio cable has the best quad shielding for the quietest specs in the industry, it is not rugged enough for rough and tumble stage use. The Stage cable, on the other hand, gives up a little on the quietness spec, but has a braided shield and filler for extra crush resistance for tough field applications.

“In video, for standard installations I tell clients that Belden’s 1694 is the best you can buy,” said Tennison. “But Mogami always makes products that are not in the mainstream markets. For example, our 2964 video cable was purchased by NASA for special applications. It’s double shielded, has very wide bandwidth, has stranded oxygen free cores and two levels of copper shielding. That’s for a very niche market.” 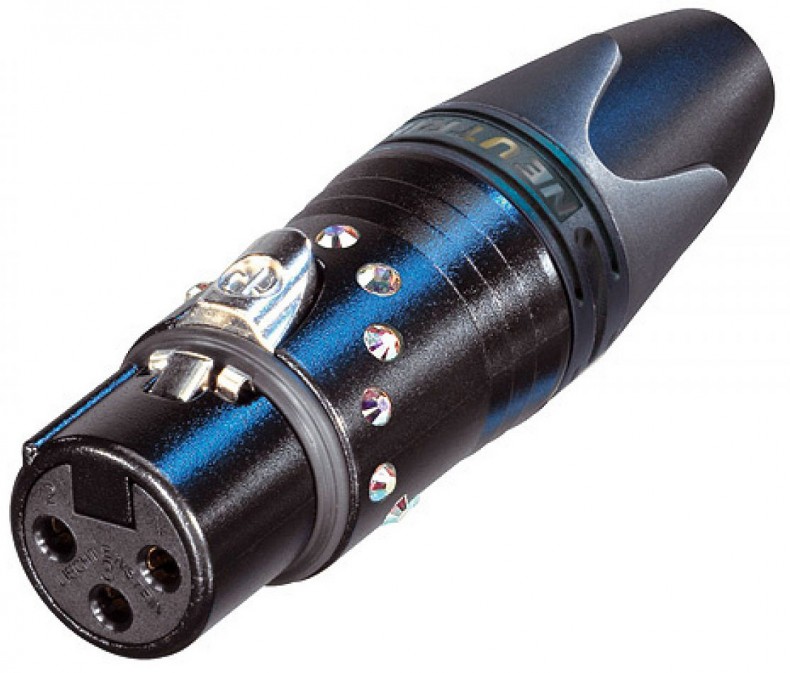 A wide variety of connectors is available, but don’t be fooled by appearance. There may be good reasons why one connector costs $5.00 more than another one. While connectors may look alike, they can perform very differently. (Shown Neutrik-NC3FX).

As for connectors, among the highest quality brands are Neutrik, Switchcraft and Amphenol, said Tennison, who uses all three and other brands for Mogami’s lifetime warranty on pre-packaged retail cables. “However, there are thousands of cheap Chinese-made connectors. I get 20 catalogs a week for them. Everybody has copied everybody else. I see many connectors which are shoddily made or their finish is terrible. You have to watch quality like a hawk.”

Low-quality cable, normally also from China, may work at first, but will probably be noisy due to poor shielding, have substandard insulation and stranding, and have a life span ten times shorter than a high-quality cable. 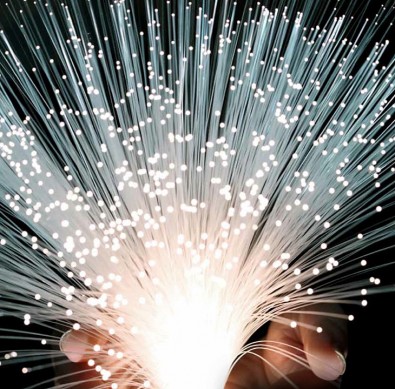 Fiber optic cable is becoming more common in broadcast and video installations because of its wide bandwidth and much smaller size, making installation easier.

Then, there’s a much newer technology, fiber optic cable. The inventor and the world’s largest supplier of fiber is Corning, who makes most of its fiber products in a factory in Wilmington, North Carolina.

In its basic form, an fiber optic cable is a hair-thin, highly transparent strand of glass comprised of a core that carries information in the form of light signals. Cladding surrounds the core, trapping the light within it. A durable, protective outer coating seals the cable.

Unlike copper, fiber is immune to electromagnetic interference, yet it is stronger than steel. It is more durable than copper cable. At Corning, fiber is tested for strength at a minimum of 100,000 pounds per square inch.

Traditional copper is in a constant struggle to meet growing bandwidth needs. As data traffic on wireless networks continues to explode (we are using 3,600,000 terabytes per month in 2014), optical fiber’s scalability helps future-proof fast growing networks.

Duane Robbins, manager of worldwide applications engineering at Corning, said since his company’s first fiber products in 1970, the attenuation — how much light is lost versus the length of the cable — has dramatically improved.

“In 1970, we achieved 17 dB per kilometer, which was three decibels better than what was needed for telecommunications use,” he said. “Now we are making fiber with attenuation as low as .15 dB per kilometer.”

In addition to attenuation, Robbins said Corning has the best “macrobend” loss performance in the industry, which is how much signal is lost when fiber is tightly bent or twisted in applications. “We’ve done this with a combination of improving the purity of the glass and the process control,” he said. “It’s how you make and form the fiber.”

Like copper, there are plenty of brands of cheaper fiber optic cable. Though the International Telecommunication Union (ITU) sets minimum standards for fiber manufacturers, different grades of fiber can still meet the ITU specs.

“A lot of people can pass the 'red tape' test and claim they meet the bare minimum standards,” said Robbins. “But what’s important is to have good quality, consistency and no flaws or defects. We do this at Corning by exceeding the legacy and current standards.” 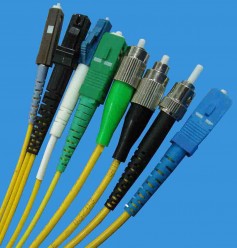 The wide variety of styles of FO connectors can be confusing. Be sure you understand precisely what your requirements are before you buy.

As for fiber connectors, both attenuation and back reflection are the most common elements in specifications. “The first step in choosing a connector is determining whether you need a field-installable connector or a factory-polished connector. From there, you must determine what fiber type and connector style you are working with,” said Jeffrey Ray, global product line manager for connectors and adaptors at Corning.

“But, at the most basic level, there are three important factors in determining the quality of your connector: the quality of its components, the capability of the polishing process and the extent of the quality system that maintains product traceability all the way back to the fiber.”

Since 1970, more than 1.5 billion kilometers of fiber have been installed around the world, creating a series of global communications networks that connect with devices such as computers, smart phones, iPads and other wireless devices.

The increasing global demand for bandwidth has kept fiber development in a race for higher capacity products. Corning and other manufacturers are constantly releasing new and improved fiber cables ranging from submarine, long-haul, fiber-to-the-home, enterprise networks to short cables for desktop home computers.

To most outsiders, cable and fiber may appear to be a staid industries without a lot of activity or change. But, that’s not true. Like all other technology industries, demands for new and faster transmission capability comes quickly as the demand for bandwidth increases.