When it comes to sports broadcasting, IP technology is changing the game with winning results. The use of IP has the potential to simplify sporting applications making them more cost effective and operationally efficient. From major global sporting events, to the coverage of smaller, niche sports, broadcasters can overcome a number of challenges, including issues surrounding scalability, and tackling the high level of cost and complexity associated with remote production, through the introduction of IP.

The prospect of higher resolutions such as 4K and 8K coming on to the horizon has been one of the biggest drivers behind the adoption of IP technologies in broadcasting. There is a strong connection between UHD and the move towards IT-type technology and in the future having an infrastructure that is tied into a single format does not make sense economically. Any changes in format, such as analogue to digital and SD to HD, have traditionally involved reinvesting and recreating a new infrastructure. The move from SD to HD was a huge investment for broadcasters and it is easy to see why broadcasters may come to the conclusion that it doesn’t add up financially. However, the operational advantages of IP technology offer a better return on investment.

Previous investments in infrastructure have involved substantial capital expenditure, a challenge for companies to plan for and budget. Having an infrastructure based upon an annual revenue model rather than a large irregular capital expenditure would certainly appeal to today’s cost conscious broadcasters. With IP, there is an entirely different financial approach, involving limited upfront costs and recurring payments.

An IP based infrastructure makes changes more simplistic with the ability to evolve in a multi-format world. The industry now has a neutral platform for video data and it is the software that determines which format it is working in. When it comes to the hardware, broadcasters will only have to invest once and then multiple formats can be handled with a single investment.

Producing live sporting events, particularly on a large scale, often requires substantial cost commitments and planning with military precision. Sending a full outside broadcast (OB) truck to the location with a production team is an inherently expensive business. The truck is a big investment, which does not bring in any money while it is driving to different locations. The production team also needs to be transported en masse to the location and provided with meals and accommodation.

One of the biggest differences of IP in sports remote production is the way the signals get from the stadium to the studio and production companies are increasingly turning to IP contribution circuits. IP links provide communications, access to central databases and reverse cue video over the same path. Importantly, it also allows for more than one video feed to be sent from the site.The cabling becomes simpler and drastically reduces the amount needed, meaning there is less of a requirement to send OB trucks and fewer staff are required on-location, so the cost comes down significantly. Production is carried out at the broadcaster’s base and there will be greater utilisation of the hardware, adding further financial benefits.

With mild JPEG2000 compression, it is possible to send multiple cameras and microphones down an IP connection or over dark fibre. Where bandwidth is constrained, H.264 compression can be used, with minimum loss of quality. As IP connections are ubiquitous and comparatively inexpensive, coverage can be delivered from virtually any location back to the central production. 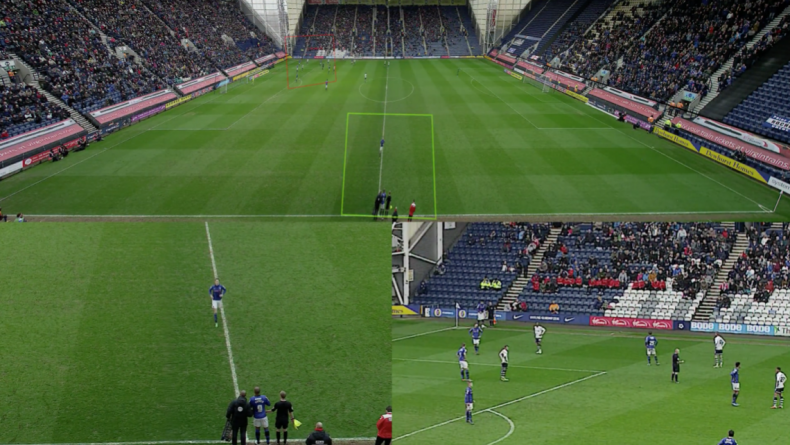 The operators screen shows the panoramic view of all the action and the two separate camera views. The two camera views can be operated independently ensuring that none of the action is missed.

Getting the Right Shot

The use of IP can also have an impact on cameras used in sporting events. If a small remote production with a three camera set up is used, then an operator is needed for each camera and three camera streams have to be sent back to base, even with video over IP. There are solutions emerging in the market that have been developed to further reduce costs associated with the camera set up as well as increase production values. Solutions such as RT Software's tOG-Vista system provide a panoramic view of the whole stadium with only two completely unattended cameras sending just one stream back to the production base.

The solution involves two 4K static cameras which are fixed in position at the stadium, one pointing to the left side of the pitch and one pointing to the right side. The tOG-Vista system effectively stitches the two live outputs from the cameras together to make one panoramic shot of the entire field of view. The remote camera operator then has a field of view that he can operate virtually as the HD outputs are joystick controlled to allow the operator to follow the action, and zoom in and out as required and it is this view which is streamed back to base.

While remote production may never be suitable for the biggest sporting events, since the cost of bandwidth would begin to rival the cost of sending a truck, for sports broadcasters, contribution over IP for remote production is a win all round. It raises production standards on the big projects and makes niche sports a practical proposition for live broadcasting and reaching new audiences, while saving costs at every level. 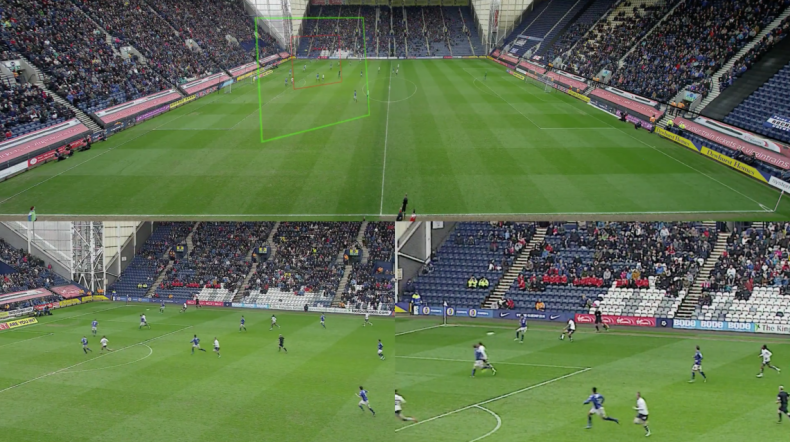 Alternatively, the two virtual cameras can be ganged together to give a tight and wide option of the action being followed.

IP and sport in the studio

Away from the pitches and stadia, IP is increasingly being used across various parts of the broadcast workflow back in the studio. Today’s major live studio-based sports programmes have some of the most dynamic applications in broadcasting, with virtual studios, augmented reality and the latest cutting-edge graphics.

For example, in virtual and augmented reality graphics when video is distributed over SDI, each camera in the studio needs its own workstation rendering the graphics from that particular camera’s point of view. If we think about augmented reality studio using graphics coming up out of the floor to show stats, results and tables for a live game, there might be three cameras in the studio. One camera looking from the left pointing at a graphic, the perspective would be different than the camera pointing from the right. As a workstation can only control one SDI I/O card, when the production team switches between cameras they would have to take the output from another workstation which is rendering the graphic from a slightly different angle. So the broadcaster is somewhat limited by the hardware.

With IP, the broadcaster can use virtualisation. If the workstation is powerful enough, it can control multiple network interface cards to allow the broadcaster to have multiple video I/O in the same workstation. In the case above, we can then run three instances of our tOG renderer and output each rendered camera view as a separate stream on just one workstation.

Solutions that allow the inputs to be rendered on a single workstation could lower both the costs and complexity in the studio. The coverage and programming can be as cutting-edge as ever, however the broadcaster could reap the benefits of increased operational efficiency.

The use of IP in sports broadcasting is proving its performance, cost effectiveness and reliability. Although, there is still a way to go before it is adopted across the entire broadcast workflow, sports broadcasters are already taking advantage of the technology in remote production, live events and in the studio to boost their operations as well as their bottom line.