SMPTE defines a set of stringent requirements for return loss, which have been challenging for many hardware designers even at today’s speed of 2.97 Gbps. As the industry upgrades to 5.94 Gbps and 11.88 Gbps to support ultra-HD video resolutions, meeting return loss will become even more challenging.

In the professional video industry, return loss is an important parameter that measures the reflected signal that bounces back from a terminated device. This Texas Instruments article discusses return loss in general, the SMPTE requirements and why they are challenging, the design methodology including board layout optimization through co-simulations, and new video solutions that help users in solving these challenges.

What is return loss 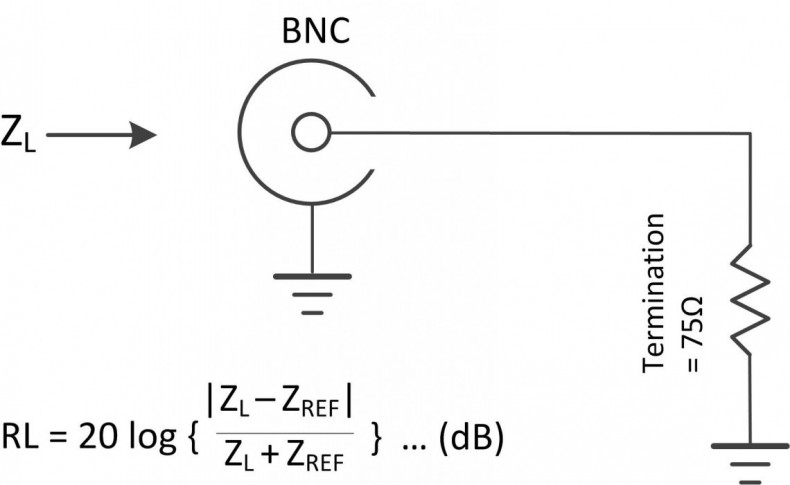 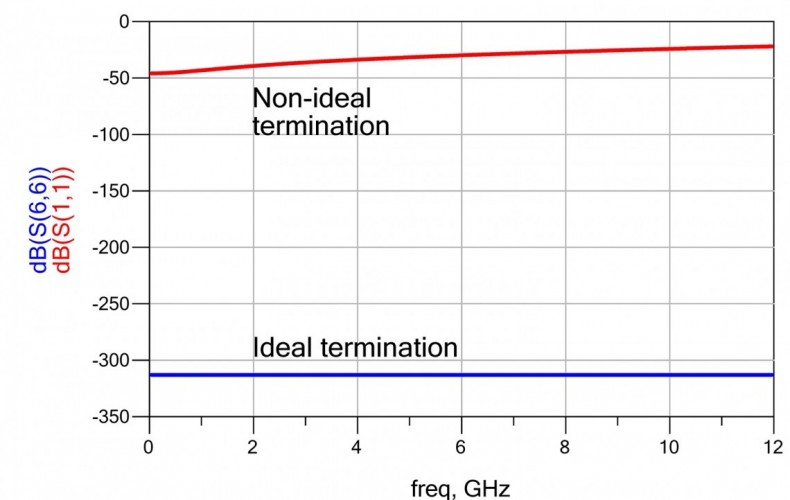 Let us examine a simplified circuit of a video link shown in Figure 3. The impedance looking into the Bayonet Neill-Concelman (BNC) connector port of the transmitter or receiver is expected to be 75 Ω. In the transmitter and receiver integrated circuits (ICs), the electromagnetic discharge (ESD) protection structure presents a parasitic capacitance that shunts the 75 Ω termination. The impedance drops at high frequency and degrades the return loss. Figure 4 shows that the return loss of the circuit is unable to meet the return loss requirements defined by the Society of Motion Picture and Television Engineers (SMPTE). 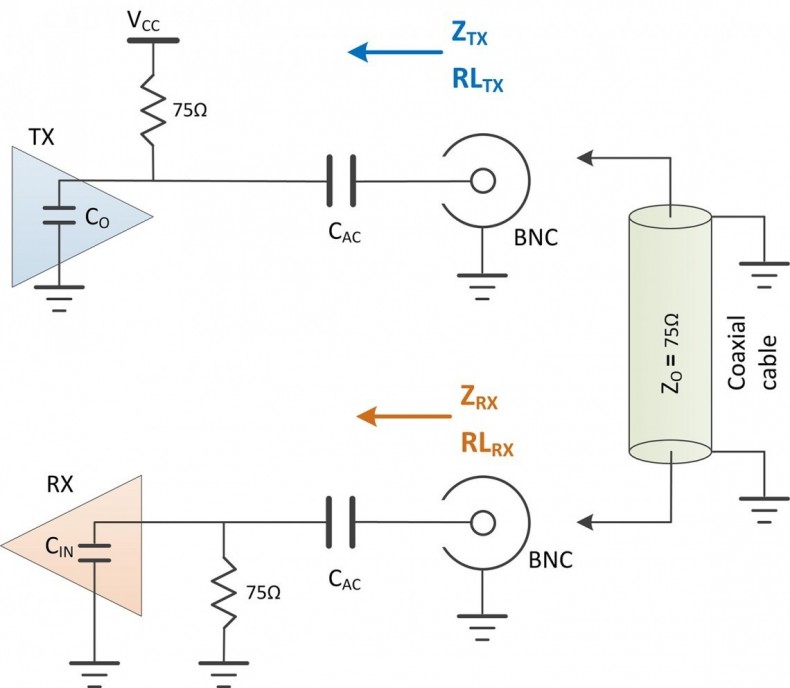 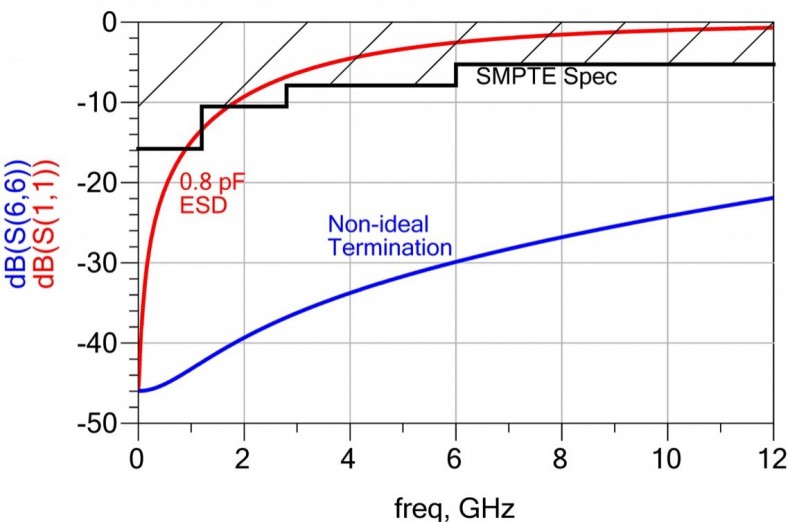 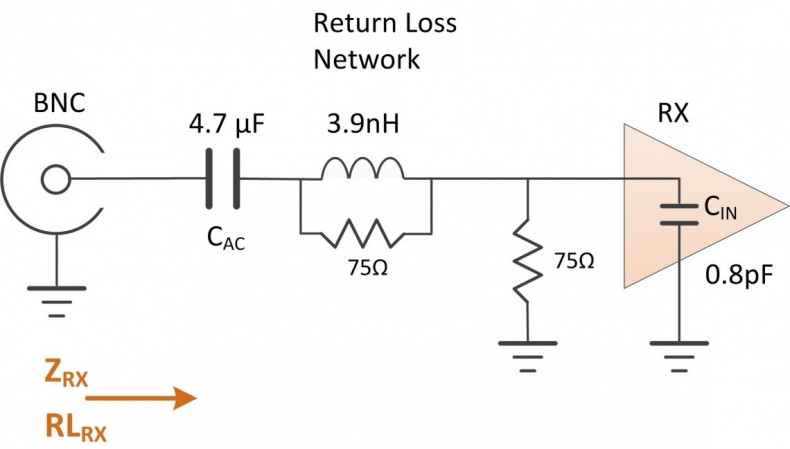 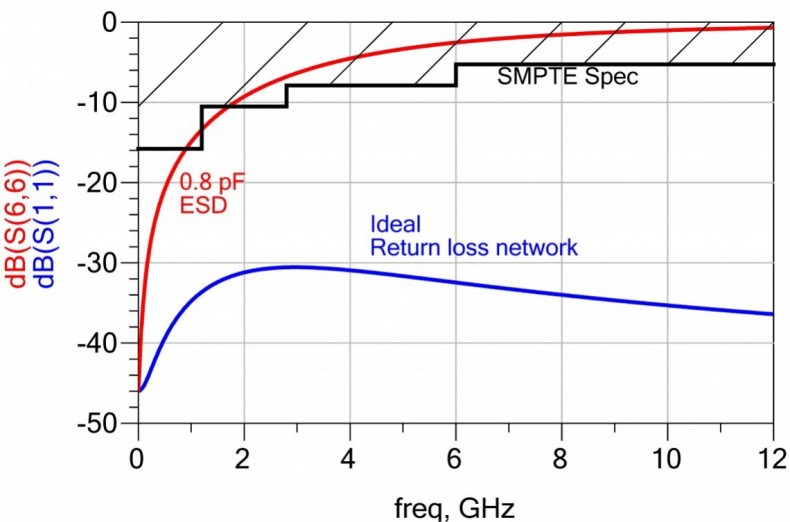 How to optimize return loss

In a real implementation of the video circuit, there are circuit elements such as the printed circuit board (PCB) trace, alternating current (AC) coupling capacitors, BNC connector, as well as parasitics of the components and their PCB footprints. These elements, along with the placement location of the compensation network, all play a role in affecting the return loss of the circuit. Figure 7 illustrates the equivalent circuit of a typical video input port, including the parasitic elements.

With the PCB parasitic and placement constraints, Figure 8 illustrates the return loss of a poorly designed receiver, despite the return loss network being used. In order to meet the SMPTE return loss specifications, designers should optimize the components’ PCB footprints, the value and the location of the return loss network, and their parasitics in a high-speed PCB design. Table 1 lists a few recommendations as guidance in the optimization process. 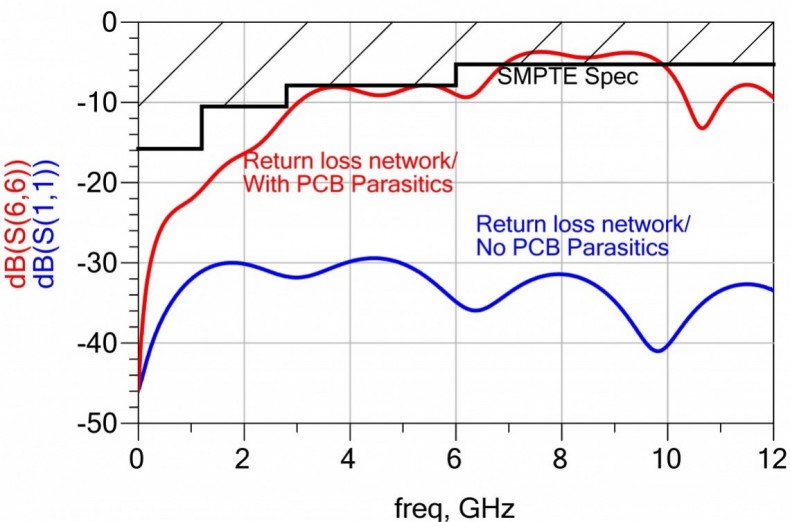 Figure 8: Return loss of a receiver without optimizing PCB parasitic

Over the years, video resolutions have moved from 270 Mbps standard definition (SD), to 1.485 Gbps high definition (HD), to 3 Gbps widely used today. Optimizing return loss is a challenging task at increasingly higher speeds. With the industry upgrading to 11.88 Gbps ultra high-definition (UHD) supporting display resolutions of 4K/8K, it is even more challenging to meet the stringent return loss specifications. The IC’s ESD capacitance becomes more dominant and the parasitic effect of external components is more difficult to optimize at higher frequencies.

Choosing a PCB board stack-up

In a typical video sub-system, a digital video signal is routed from a BNC connector through an AC-coupling capacitor to a high-speed video IC with 75 Ω single-ended trace. The video IC also interfaces to an FPGA or video processor through 100 Ω coupled traces. A board stack-up is chosen to allow the 75 Ω and 100 Ω trace routing with 6-10 mils trace widths, minimizing insertion loss and impedance mismatch.

Figure 10 illustrates an example of the PCB layout, while Figure 11 shows the cross-sectional view of the PCB stack-up. In this example, the 100 Ω differential traces are routed with 8-mil trace widths, separated by a gap of 10 mils, and achieve 100-Ω differential impedance with reference to the ground plane at layer 2. The 75 Ω single-ended trace is also routed with an 8-mil trace width, and achieves 75-Ω characteristic impedance with reference to the ground island placed at layer 3.

Once you choose the PCB stack-up, a quick pre-layout simulation allows you to design with confidence and avoid costly board re-design. A 2 ½-D electromagnetic field solver offers fast simulation time that is most suitable for running what-if simulations in a PCB optimization analysis.

A three-dimensional (3-D) electromagnetic simulator is used to simulate the landing pad structure used for determining the anti-pad size in order to achieve the pre-determined target impedance (in this example, better than 65 Ω). Running 3D simulations on a small landing pad structure is much faster than running a larger board simulation, which usually takes days. For more accurate results, a final post-layout simulation based on the actual board layout is highly recommended.

Meeting SMPTE return loss requirements is historically challenging in the video world, relying on external termination and a return loss compensation network that leaves the challenge to system designers on complex iterative board optimization. When upgrading to UHD, it is not practical for optimizing external components on return loss and other SMPTE parameters, such as jitter and signal edge rates. Texas Instrument’s advanced circuit design and process technology offer new video solutions with integrated termination and an integrated return loss compensation network. This new class of semiconductor solutions, in combination with common high-speed board design methodology, gives system designers the ability to upgrade equipment to 11.88-Gbps UHD with confidence in meeting stringent SMPTE requirements. These new video solutions are key elements in bringing UHD live broadcasts to the consumer’s home.