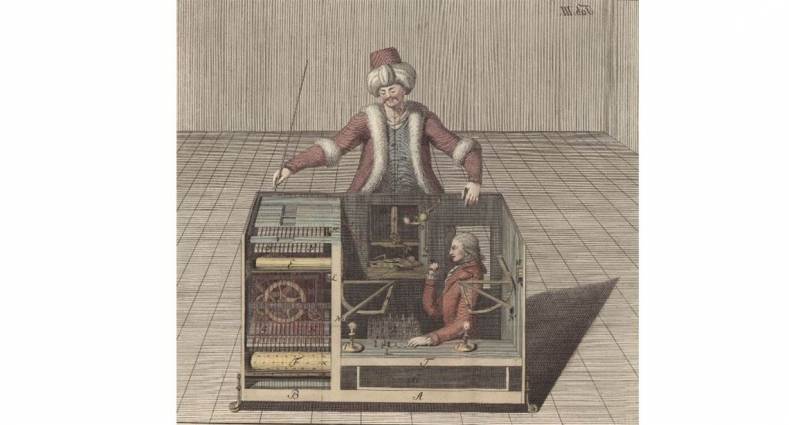 The Mechanical Turk was a chess playing automaton exhibited around Europe from 1770 to 1854. Image public domain.

In the transition to IP, do you know what the product is you might be buying? Is everything as it seems, or will you draw back a curtain to find nothing has changed, realize that the medicine is snake oil or that you have been tricked and locked into an expensive proprietary platform? Even if the product uses media industry standards? What questions should you ask?

What is your organization trying to achieve with a transition to IP? For example, using the internet rather than a phone line, it is possible to replicate fax machines like-for-like, but I choose to communicate using e-mail, VoIP, instant messaging, web conferencing, social networks, cloud drives etc.. Is a transition to IP - Internet Protocol - a replacement of an existing signal-based infrastructure like-for-like, or is it to benefit from business transformations enabled by IT - Information Technology? Is the purpose to update a content production facility for the opportunities and challenges of reaching a tech-savvy audience, or to update some aging plant? Riding the IT core means building on the same commodity infrastructure that Mi-goog-azon-book-er have used to democratize many industry sectors — using software — including knowledge, communication, information, community, shopping, media & entertainment, etc. What questions should you be asking to determine what you need, when you need it and whether what you buy is IP or IT?

I am a computer scientist. I’ve always looked at the technology from the perspective of ‘How can I use software to make a computer really sing?’. For example, if I gave my friends from the Victorian era - who have missed out on the history of broadcasting - the internet, a data centre and a smartphone, how would they build an efficient, data-driven content production and delivery infrastructure? What benefits and limitations would they see in some of the proposed solutions on offer, free from the legacy of signal-based thinking? Would a concept of broadcasting using media-specific standards emerge? Ultimately, do the users of this infrastructure care what lies under the hood or do they want to get on and use it, just like buying a ticket and getting on a train or plane?

If you are purchasing today and have to get on air, many media-specialist products are already available that offer pragmatic, IP-based solutions. To help characterize what you are trying to achieve in the longer term and analyse what is on offer, read on to arm yourself with some questions. This is followed by some steam-powered observations from my Victorian friends!

The Mechanical Turk was a chess playing automaton exhibited around Europe from 1770 to 1854. Visitors were shown into a darkened room where a robot-like figure sitting behind a large desk would appear to play you at chess automatically. Exposed as a hoax in 1820, when you draw back the curtains under the desk you expose your lever-operating human opponent. What IP solutions appear to be something new but are a legacy solution dressed up to look like IT?

Replacing a signal, analogue or digital, by tunnelling it through network packets - appearing bit-for-bit the same at both ends - changes little. Arguably, the process itself adds complexity - like the levers of The Turk - as it becomes necessary to engineer around issues of transporting signals as packets and defend against any other network traffic. To detect this kind of solution: 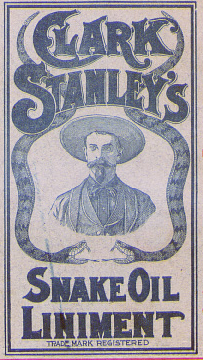 Modern post-production, editing and file-based workflows demonstrate that compressed and uncompressed media - video and audio - can be processed on commodity computing infrastructure - CPU, GPU and storage. Even on a laptop, this processing is often several times faster than real time and can be at resolutions of 4K and above. Many low-cost expansion peripherals support the use of media-specialist signals - such as SDI and ASI - via standard IT interfaces - PCI, USB and Thunderbolt. Ten gigabit networking is becoming more commonplace and affordable. Modern software engineering is test-driven and delivers reliable software, i.e. app store apps.

Snake oil refers to any product with questionable or unverifiable quality or benefit. Given that professional media processing with commodity computing infrastructure is proven, are all media-specialist products providing a true benefit? Have all claims about reliability, performance, scale and hardware density in favour of media-specialist products been fairly demonstrated and measured against well-implemented software-only counterparts? Here are some questions to ask: 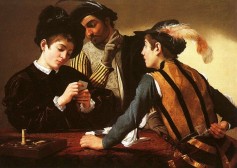 It looks like IT, smells like IT but is it actually IT? IT has a language that includes terms including: containers, cloud, virtualized, apps, app stores, dev-ops, continuous delivery, open source, APIs, data model, web-based, scale-up, scale-out, agile, software-defined, bandwidth etc.. Each of these terms are connected to one another and have a specific meaning for the standard IT platform. Change the meaning of one or two terms and you have diverged from THE platform. At what cost? Does the use of a term in the description of a media-specialist product convey the standard meaning or are media-specific wheels being invented, or are you being locked in with something proprietary and expensive?

Here are some things to watch out for: My Victorian friends have dived straight in at the internet and missed the history of broadcasting. They have made a few observations and this is what they have to say: