When seeking storage for video production and post applications, do you know how to differentiate media optimized for video from general purpose media for general types of data? If not, ProMax a media solutions provider based in Santa Ana, California, has published some useful information on the topic in a new white paper.

Written by Nate Cooper, ProMax’s director of sales and marketing and a veteran in video workflow issues, the paper provides basic guidance and understanding of shared storage for video to help end users make an informed choice.

While there are thousands of IT vendors that can provide RAID arrays, network storage and networking services, most know very little about video production, post-production and streaming. Many an installation has failed by making the wrong choice.

The vast majority of servers are designed for a large number of users (from dozens to 100’s to 1000’s) with a high number of IOPS (Inputs/Outputs per Second) and generally low bandwidth to each connected user. Video production is nearly the opposite.

Video production requires fewer users (usually 100 or fewer) all with high bandwidth (often 50MB/s to 300MB/s+ to each user) connectivity to every creative user and a much lower number of IOPS.

Because of these unique requirements, which are opposed to the majority of what the rest of the market needs, there are niche products that serve the video production market. 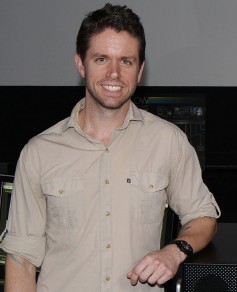 All vendors familiar with video will have a list of basic questions they will ask. To save time, and make sure the proper information is covered, it is best to prep this information prior to contacting a potential vendor.

Some of these questions include:

There are several different approaches available in the market. One is SAN vs. NAS.

The history of SAN vs. NAS in the video work goes back to the early days of NLEs. In the early 2000’s, when Avid Unity and Apple Xsan were first becoming available, SAN was the go to topology for two reasons: it had faster protocol availability (1GbE vs. 2Gb Fibre) and block level connectivity had less issues with video streaming and dropping frames.

Since the mid to late 2000’s, many vendors have switched to a NAS architecture altogether or have added NAS options for their customers. This is due to the introduction and now reasonable pricing on 10GbE, as well as many vendors who have “tuned” NAS for video performance and achieve performance equal to a block level protocol.

In practical operating usage there are no major differences between SAN and NAS. Both must be properly tuned for video workflows, both can work equally well with proper tuning.

In its most basic definition, RAID is a group of drives working together. There are different types of RAIDs and in general, each type of RAID provides varying levels of three basic considerations: data protection (how many drives can fail without losing data), speed (how fast can the drives work together) and usable space (how much data storage can I actually use). 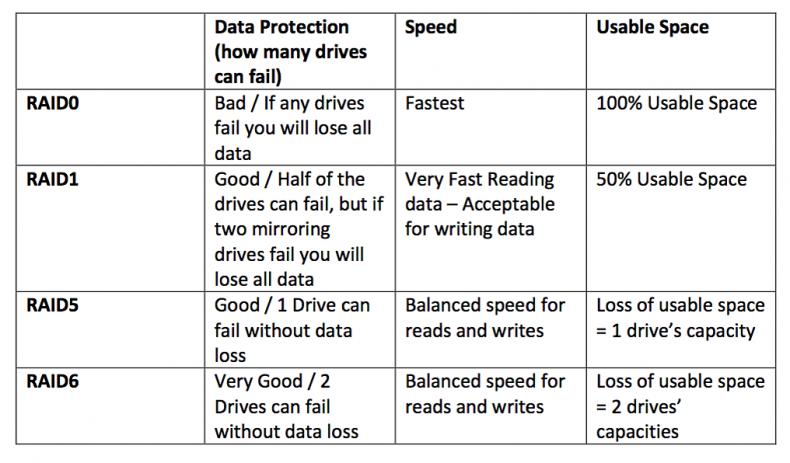 There are two predominant RAID types used in shared storage systems and two others that are good to be aware of. Start with the two most commonly used RAID types:

RAID5 was almost exclusively used prior to RAID6. Any RAID5 must contain at least three drives, however, RAID5 is usually set up with 4, 8, 12 or 16 drives. Many professionals recommend not using more than eight drives in a single RAID5 because it will increase the chances of losing data due to more drives in a RAID set that can fail.

RAID6 has become more popular in the last few years. When first introduced, RAID6 was not commonly used because of performance issues and long rebuild times. Most companies have improved RAID6 technology to the point that this is a non-issue.

RAID6 provides similar read/write performance to RAID5 but with additional data protection because a RAID can lose two drives without any data loss. Usable space in a RAID5 can be calculated by usable space = total space in RAID – total space of two drives.

RAID0 is almost never used for shared storage. It provides no data protection. RAID0 is only used in rare circumstances where performance is critical and data protection is not important. This was used more commonly in the early 2000’s when RAID5 and RAID6 performance was not as good as it is today. RAID0 is not recommended.

RAID1 is commonly used for small locally attached RAIDs or for system drives. Often servers will use RAID1 (also known as “mirroring”) on their system drives to ensure the OS is protected. RAID1 takes even numbers of disks and mirrors data across two drives at the same time. RAID1 provides fast reads, but writing performance is not as good.

Usable space in a RAID1 is equal to half of the total space of all drives in the RAID.

If a RAID1 has multiple drives fail you are subject to data loss depending on what drives fail. If two drives that are mirrored both fail you will lose all data. Generally speaking, RAID1 is only used two mirror two drives.

Disk drives are available in multiple protocols (sata vs. SAS) and at many different capacities. SAS drives typically spin at a faster speed than sata drives and are primarily designed for higher IOPS (input-output/second) requirements.

These are used in database servers and high-end transactional environments but generally are not necessary in video production. Fast bulk transfer of data is the requirement for video and sata drives are the best choice for this type of transfer with large capacities.

In sata configurations, enterprise drives provide little additional advantage for the additional cost (which can be significant). Enterprise drives have the exact same technical specifications as standard drives (RPM speed, system cache, transfer rate), however, they are selected off the production line because they have slightly less rotational vibration.

Drive companies offer them with longer warranties yet add a significant premium (sometimes two to three times the cost) of a standard drive.

There are a few more considerations to keep in mind. All shared storage servers should have power connected to a UPS (uninterrupted power supply). A UPS will ensure that if power is lost at your facility the server will not immediately lose power.

This gives the server enough time to flush data out of the controller cache and an admin or IT department time to login to the server and shut it down properly while power is restored.

This is critical because sudden loss of power can lead to data corruption on a file system or volume. Although a UPS does not guarantee protection from these issues, it will greatly reduce the chances of these issues.

If you are connecting to your workstations by switch or server with fiber cabling, chances are you will being using SFP’s, SFP+’s or XFP’s. These are all used for connecting cabling to HBA’s, switches and servers. Make sure your vendor is providing the correct number of each item to provide all connectivity needed.

These components range from $50-$200 (or more for long range needs) and if not spec’d properly, can be a “whoops” add-on cost of several hundred dollars.

Servers are large and deep. Be sure to measure the needed rack space to accommodate them. With very few exceptions, servers are also loud. Very loud. Don’t- edit-near- them-loud. When editing audio and video, it is critical to be able to clearly hear audio.

Most servers range from 75 to 85 decibels of output. Make sure that your server will be removed from the areas where people are working. This is often a server room or closet.

If you do not have a server room or closet there are some options for “quiet racks” which can dampen the sound enough to be in the same room. However plan on spending $2,000-$3,000 depending on your needs for a quiet rack. In general, copper cables are more readily available, less expensive and more durable. Fiber cables are lighter and can go much longer distances. Within each type of cable there are different types or ratings of cable, each with different limitations for distance and speed. Do your research and choose the right cable for your installation.

Some final considerations that will assist you in your decisions: