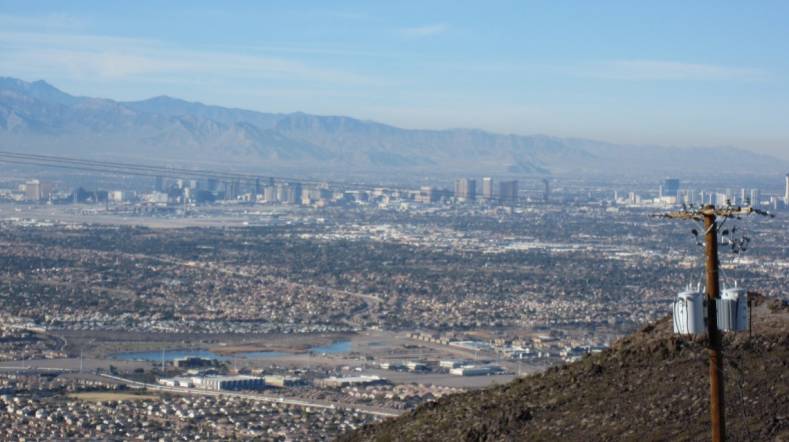 The view from the Black Mountain transmitter site shows the Las Vegas valley and the Boulder City NV areas.

This is the story of one of two ATSC 3.0 experimental transmissions that took place at CES 2016. Under a FCC Special Temporary Authority permit for Channel 18, station KHMP transmitted an ATSC 3.0 UHD signal to the LG CES exhibit booth using a GatesAir transmitter and Dielectric antenna. The other CES ATSC 3.0 demonstration transmission is covered in a recent Broadcast Bridge article.

Joe Seccia is GatesAir Manager of TV Transmitter Market and Product Development Strategy, and the engineer-in-charge of the transmission end of the Channel 18 UHD test broadcasts for LG Electronics at CES. The Broadcast Bridge recently debriefed Joe to prepare this story.

GatesAir was approached by LG Electronics in early December. LG was introducing new OLED big screens at Winter CES. They wanted to demonstrate them displaying UHD with HDR, using the ATSC 3.0 candidate standard physical layer. While that would have been easy enough to accomplish closed-circuit within an exhibit booth, LG wanted to show real RF reception, not a simulation.

LG felt it would be of great value to the industry to organize an actual over-the-air public demonstration of HDR UHD at CES. Their goal was to showcase the beauty and quality of UHD HDR pictures on their new line of OLED TV sets in a real-world setting.

UHD is on right now

South Korean technology is at the national forefront of the upcoming 2018 Winter Olympics in Pyeongchang, South Korea. Right now, UHD is being broadcast to South Korean homes. It’s called UMAX and its source is MSOs via DVB T-2 transmission on some UHF channels. LG TV sets made for the South Korean market are mandated to include two tuners, one for ATSC 1.0, the other for DVB T-2. South Korea is using the 6 MHz version of DVB-T2.

TV manufacturers and South Korean broadcasters are working as fast as they can to standardize on one UHD system, and the ATSC 3.0 Physical Layer Candidate Standard may be the most efficient. Questions South Korean TV manufacturers are asking are: How soon will it be real, and when and where can we buy the hardware?

With a February 2018 deadline looming, South Korean UHD broadcasters want to eliminate the risk from the UHD transition. They want to be on the air in 2018. That gives them all of 2017 to find and work out bugs, because the next February, it’s show time. The sooner everyone can qualify gear, confirm workflows, and test, test, test, the better.

LG had a contact with DNV Spectrum Holdings, owner of LP DTV station KHMP located on Mt. Potosi on the southwest side of town. It was currently off air and had a construction permit to move to Black Mountain, the location of most other Las Vegas TV transmitters and towers. Vince Costelli is the DNV principal. 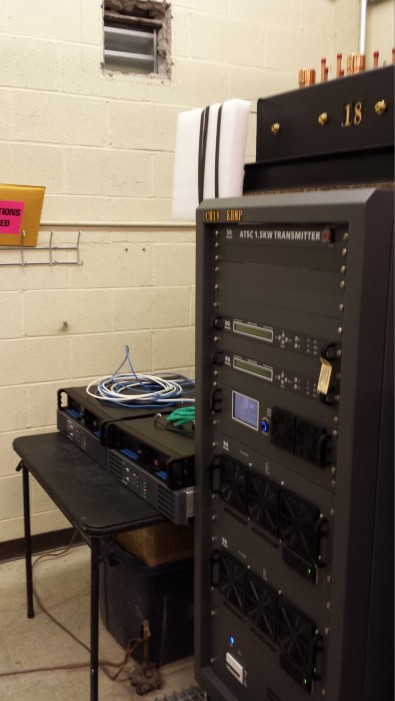 The KHMP transmitter building was the point of origination for the experimental ATSC 3.0 UHD Channel 18 transmission.

KHMP had all the hardware to make the move but nothing was installed. In a month, two transmitters and an antenna were installed on the former site of Qualcomm’s Media-FLO transmitter. About two weeks before CES opening day, Joe Seccia visited the site to install the exciter. The transmitter had not been connected to the antenna yet, so Joe verified the exciter and transmitter with a dummy load. On 3 January 2016, three days before CES opened, the antenna plumbing had been connected and Joe arrived on site for on-air tests.

KHMP was on CH 18. KEEN is on CH 17 and KHDF is on CH 19, all broadcasting from Black Mountain, all at approximately similar ERPs. The KHMP transmitter output 450 watts, ERP was approximately 4-4.5 kW. Yet at the receive antenna, located on the LVCC roof, the KHMP signal was 10-15 dB below the adjacent channel signals.

Joe had seen a problem like this before, at a transmitter site in Mexico. Everything including VSWR appears nominal to the transmitter, but the signal is less than anticipated at receive sites. It seemed to be the same problem because it raised the same questions. Joe suspected the antenna. 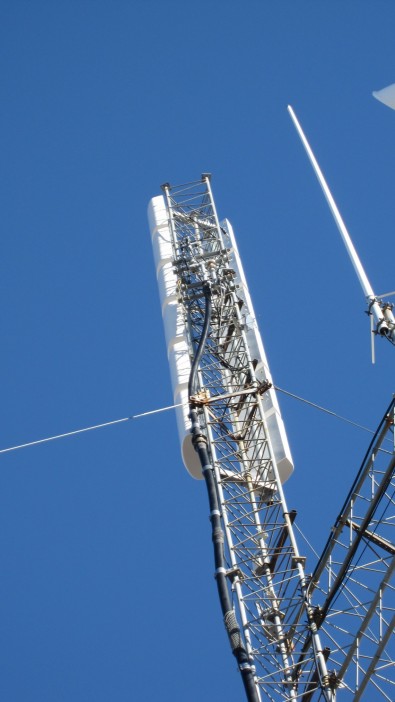 Dielectric analyzed the problem by phone in real-time with the tower climber. Feeder plumbing feeding the dual 6-bay panels were complex, and as it turned out, a line section between power dividers that affects phasing of the antennas was found to be incorrect. The result of the mis-phased energy was beam-lift instead of beam-tilt, certainly not the right direction from a mountain top. The plumbing component was reversed and the LVCC signal then became roughly equivalent with the others received atop the LVCC, as originally expected.

The LVCC is an interesting building. During setup, when the big metal garage doors are all open, TV reception is fairly good inside the convention center. When the show starts and the big metal doors are shut, the LVCC becomes a Faraday cage. RF can’t get in or out.

There are only a few places where LVCC will allow the mounting of an antenna, and then only on its towers on the roof. Antenna feedline only enters the convention center through a few roof snorkels. In the case of the LG demo, the receive antenna was about 300 feet from the most appropriate roof snorkel and another 125 feet or so to the exhibit booth. On Channel 18, a cable that length is going to need a pre-amp.

Fortunately, Zenith had a 30 dB preamp on-hand. More fortunately, Zenith also had a bandpass filter, because all the RF emitting from Black Mountain would overload the preamp. Zenith knew of the over-the-air RF issues at LVCC and came fully equipped. 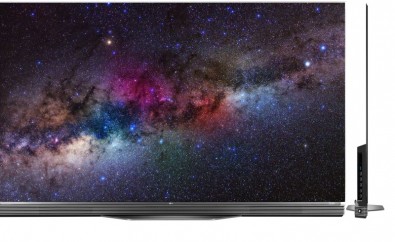 Picture on right isn’t a whip antenna. It’s the side view of the new LG OLED65E6P, 65” OLED display on the left, introduced at CES and used to display Channel 18 broadcasts.

The lineup is expected to meet the new UHDA “Ultra HD Premium” HDR certification and will also feature Dolby Vision HDR technology, making them the first to be compatible with both formats.

The E6 series displays the stunning picture quality of OLED on an elegant, stunningly slim glass panel. This unique Picture-On-Glass design measures just 2.57 mm (one-tenth of an inch), with a translucent glass back and powerful speaker system.

LG, Zenith and GatesAir are co-inventors of the transmission system behind the ATSC A/153 Mobile Digital TV Standard, adopted by the industry in 2009.

The landmark UHD transmission on Channel 18 in Las Vegas signed-on Monday afternoon 4 Jan and signed-off on Saturday 9 Jan at 4 p.m. Everyone was pleased and Joe was relieved.