Digital…..the word has such broad connotations. Digital ‘gadgets’ are now affecting nearly every person on the planet today, in one form or another.

For broadcast, the move to digital initially meant that we would finally be rid of a non-forgiving, complex analog infrastructure. It meant a new way doing business, less emphasis on keeping the analog products operating according a laundry list of technical specifications. The day to day operation was evolving to a more forgiving facility, losing videotape interchange restrictions, a myriad of hardware boxes used to interface unique devices into the broadcast system, and, in some cases, the need for highly skilled personnel to operate a very sophisticated system.

The broadcaster’s audience is now asking to receive content distributed ‘over-the air’ while experiencing second screen content simultaneously distributed by an internet provider (in some cases OTT) via his satellite, CATV, or commercial fiber network. The audience’s “TV Set” has changed as well. It is expected that content be viewed on large and small screen in the home, tablets, desktop computers, and a variety of mobile devices.

Transitional Times
US Broadcasters have been faced with an evolving environment since the late-1990s, when the ATSC’s digital broadcast definitions were accepted for implementation by the FCC. That evolution has turned the traditional local TV station into a Digital Media Outlet. And to be a successful Digital Media Outlet, the TV station needs to realize that properly converging broadcast and IT technologies will enable the creation of a new and more efficient operating environment.

WHY?
Why can’t we continue as we were?

Why do we need changes?

The diagram following demonstrates that the modern Digital Media Outlet provides more than a single live program stream to its audience. Most US broadcasters today provide a multiple program digital multiplex stream to their community in providing their core broadcast business. 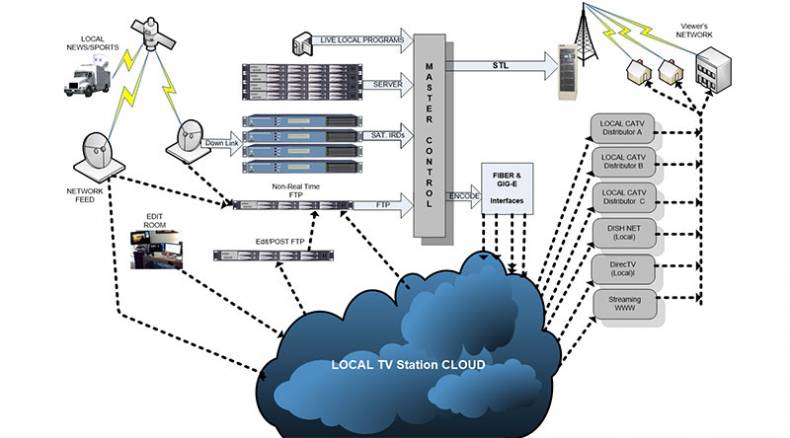 The diagram demonstrates that the modern Digital Media Outlet provides more than a single output channel. In fact, most US broadcasters today provide a multiple program digital multiplex stream as a component in their core broadcast business.

Many streams exit the facility pointed to a particular destination. If we were working exclusively with baseband or RF signals, the routing paths would be unidirectional, hard-wired links between a matrix router’s physical cross points, an interface network comprised of unidirectional distribution amplifiers, cables and of course an active device that either emits the signal into an RF ‘over the air’ network or onto a CATV system where the signal is distributed in QAM to a Set Top Box in the home.

But, we are no longer working in the past or with baseband signals.

Modern Pathways
Studio transmitter links are muxes of program information initially compressed into a standard MPEG ASI format, then packetized, as in Ethernet, then distributed over fiber optic cables to the transmitter. At the transmitter the packetized Ethernet over fiber data again takes the form of ASI for the physical connection to the modulator, i.e. the transmitter exciter, where the program mux now enters the RF domain for distribution to the audience at home.

Another similar (one could say parallel path) of Ethernet over fiber moves the Digital Media Outlet’s program data through another layer of distribution, taking the form of a CATV system or satellite operator. These content distributers are in the business of multiplexing and moving content to a specific region.

Note that much of the distribution mentioned thus far is limited to the DMO’s primary program stream. These signals certainly qualify for distribution ‘in the cloud’ (see Figure 1.)The same or other content may be distributed to the station’s website, a live streaming service, or an online archival network like YouTube.

Distribution to multiple destinations using common networking technologies is available today, however the definition of best practices and procedures required by the broadcaster to successfully deploy his content are essentially non-existent. Broadcast operations need methods to create a reliable albeit simple-to-configure ‘connection’ in order to respond to the ever changing distribution environment. For example why does the “over-air mux’ of 19.4 Mb/s have to be exactly the same as the feed to the CATV system? Why can’t the broadcaster feed local avails to each CATV and Satellite operator, keeping control of political and artistic elements in the hands of the broadcaster not third-party distributers?

The future will bring a larger demand on the broadcaster’s resources. The ability to change distributed program streams quickly and efficiently will be key, especially when the large telecommunications services demand more streams of content. The local broadcaster will likely partner with the Telecom service to provide extended multi-screen services.

There is currently some discussion in technical circles around a new concept called the Internet of Things (IoT). Some engineers define this as a technology that allows many network enabled devices to reside in the cloud, with connection as needed. Simply said, more than memory will reside in the cloud.

Broadcasters today have changed their business model to include file-based technologies. The movement of content to and from network operation centers may be in the form of either file-based or uncompressed video, however upon reception at the DMO, that content is transcoded into a common format for distribution locally. At the local level, all content lives on a digital media server for distribution to the home.

As an increasing amount of content is distributed via the cloud, broadcasters may soon desire to use a direct IP routing from source to destination. This illustration shows an innovative and graphical way to easily route IP content to users, whether they be a satellite company, cable headend or mux encoder. The author calls this DRIP.

Imagine that ‘the Cloud’ can be directed to ‘DRIP’ to a particular device through a simple dashboard/interface. The user interface/dash board graphically presents available devices as receivers of the DRIP.

The DRIP
Just like the broadcaster that needs to change his distribution model at will, in order to deliver services to his audience, so does the connection process of the IoT. Common users of IoT need to Directly Route IP packetized data to their destinations. For my example, I use the acronym, ‘DRIP’.

Imagine that ‘the Cloud’ can be directed to ‘DRIP’ to a particular device through a simple dashboard/interface. The user interface/dash board graphically presents available devices as receivers of the DRIP.

A broadcaster, for example, will have a table of common destinations. The destinations will have an icon on the dashboard (as seem in FIGURE 2). Upon initial installation the properties of the destination icon will have been configured (IP address/Subnet etc). This brings into play the need for FTP like interfaces that allow secure connections and reception of Digital Media data.

Imagine that the emissive stream includes an identifying tag. Prior to actual distribution, the receiver (as a host) was given the identity of its next stream (PSIP table). When the cloud begins to DRIP the stream, the host welcomes it (usual handshake) and passes the Digital Media stream through its designated distribution network.

In this scenario the content of each stream is limited to the broadcaster’s ability to create unique muxes. Content designated to multicast to more than one destination is tagged as such. Tags for content designated to a single route to a local distribution network will also be available.

As the definition of the cloud widens to accommodate future network capabilities, control of content will be more prevalent that it is today. Operators needing to verify routing and distribution of content will need a means to simply control many streams simultaneously. A simple interface with intelligent metadata allowing proper routing (DRIPs) of streams throughout the cloud and into multiple distribution networks.