There are plenty of low-cost and even curved UHD TV sets for sale this holiday. But, once purchased, what can we watch on them?

ATSC 3.0 and UHD are on a collision course with the set makers and retailers pushing UHD. But broadcasting UHD in ATSC 3.0 could require the bandwidth many stations now use to generate additional revenue over their sub channels. Add to that, OTA broadcasters face the upcoming questions surrounding the spectrum auction—to play or not? These issues present serious business and technical questions, at least, to US TV broadcasters.

Raise your hand if your station ever charged a premium price for HD commercials. Anyone? Raise your hand if your station’s digital subchannels generate as much or more revenue than your primary channel. Nearly everyone? That’s right, digital subchannels often help cover the expenses of new digital workflows and DTV transmitter power bills, and will be a factor in a tussle with UHDTV broadcasting.

DirecTV was recently purchased by ATT. In late November, a DirecTV executive said it would formally launch live, linear 4K content, 24/7. Speaking at conference in New York, DirecTV Senior VP Phil Goswitz said his company is capable of offering up to 50 UHD channels at 30 Mbps, in addition to its current SD and HD channels. He said his company was particularly keen on 4K sports.

The best pictures you can barely see

How did they find all that bandwidth on their satellites? According to FAQs on the DirecTV 4K webpage, “It is strongly recommended to connect the Genie (STB) to the Internet since a connected HD DVR offers the best 4K entertainment experience.” Maybe that’s a clue. You're going to need high-speed Internet service to make it work.

Dish Network is teasing its “4k Joey” satellite STB. It features H.265/HEVC supporting 10-bit 4Kp60. Details of Joey and Genie are sketchy, as are their introduction dates.

Next to the picture quality, clearly the issue with 4K is content. There isn’t much. Most is transported over the Internet from on-demand sources such as Netflix and Amazon. Having overcome internal 4K technical obstacles and issues, Goswitz strongly emphasized DirecTV’s hunger to broadcast 4K content.

Will the vacuum created by satellite MVPDs be the spark that ignites widespread 4K production? Is planning to skip 4K and plan for 8K a good idea? It seems the more technology advances, the bigger the questions become.

Right now, the consumer electronics industry is struggling to introduce 4K Blu-ray players and disks. There aren’t any to sell this holiday season. Maybe next year. Will any 4K players and 4K movies be ready for January’s CES? 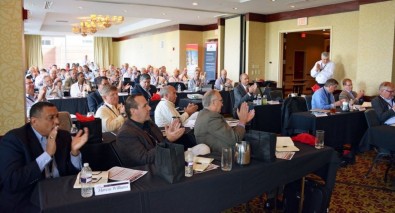 It provided an open forum about topics related to the reverse FCC auction, spectrum repack, and technologies and strategies to help broadcasters navigate a variety of transitional challenges.

The discussion and agenda at this year’s event proved a clear indication of how far the topics of spectrum repack and ATSC 3.0 have advanced over the past 12 months. That momentum has moved beyond discussion into tangible activity, with broadcasters actively purchasing equipment, ordering tower studies and generally updating RF plant infrastructure in preparation.

“There was a lot of uncertainty at last year’s event around timing, but one year later there is real movement happening in the industry to prepare for next-generation DTV,” said Rich Redmond, chief product officer, GatesAir. “Broadcasters are concerned with meeting tight deadlines for what will be the most challenging disruption to over-the-air TV services in decades.”

The GatesAir Repack Summit 2015 offered a forum to thoughtfully and responsibly lay the groundwork as broadcasters prepare for the challenges and opportunities across channel relocation and the ATSC 3.0 transition.

The FCC has not announced plans to provide TV broadcasters a second channel for the transition as it did for the DTV transition. Viewing ATSC 3.0 requires a new receiver. Flipping the switch and deserting ATSC 1.0 viewers is a significant challenge. Will ATSC 1.0 “lighthouse” stations simulcast programming?

The event opened with insights from GatesAir Technical Advisor Jay Adrick regarding station preparation for repack along with a timeline for the spectrum auction; and a summary of key points in the FCC’s Report & Order on the spectrum auction. Patrick McFadden, VP of Spectrum Policy for NAB followed with a policy overview that explored the expected timeline of the spectrum incentive auction, along with outstanding regulatory questions surround the repack process.

The GatesAir Spectrum Repack Summit gathered some of the brightest subject matter experts in the industry, covering vital topics from FCC processes and tower regulations to what happens with next-generation over-the-air TV following the repack. This was a real service to everyone in attendance, and demonstrates GatesAir’s commitment to the long-term success of broadcasting.

The afternoon delivered a compelling Q&A with Pamela Gallant, associate division chief of the video division, media bureau for the FCC, around the reimbursement program and reverse FCC auction; and a detailed presentation from Peter Starke, VP of Broadcast, American Tower, around construction logistics and their impact on multi-station TV and FM RF facilities.

ATSC 3.0 was indeed an ever-present topic over the two days, with two compelling presentations on the challenges and opportunities around this transition. Matheny explored the complexities of migrating to a new standard, and the transitional challenges broadcasters will face the midst of a spectrum auction.

Additionally, Anne Schelle, managing director, Pearl, worked through the potential revenue opportunities and business implications of moving to ATSC 3.0, including new opportunities for mobile TV delivery. This proved an excellent lead-in to Dielectric’s presentation around antenna, filtering and tower upgrades that will be required to support these emerging multichannel TV opportunities.