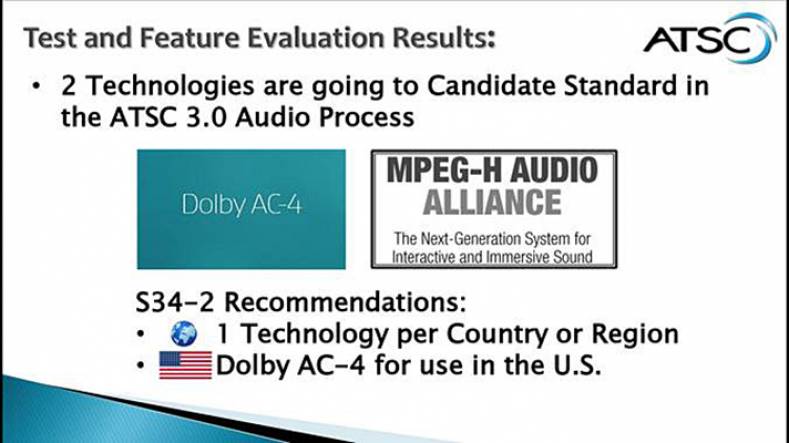 The choice between systems for ATSC 3.0 audio is now down to MPEG-H versus Dolby AC-4 and there is about equal support for each system. It’s now mired in politics within the committee, though a decision is due by the end of 2015.

A decision is said to be imminent, but no one will say for sure.

"August, 2015, that's what people told me,” said Robert Bleidt, general manager for Fraunhofer U.S. audio systems. “We've been hearing for a week that a decision is imminent. The problem is a lot of people want MPEG-H chosen and a lot of people have worked with Dolby for years and feel more comfortable with something they know. They want the Dolby standard to be used. So how do you decide? Each side wants their standard to succeed.

“It is down to the wire now,” he continued. “We don't know who will win. We have our supporters and Dolby has theirs. It is about equally divided. So we are at a stalemate.” 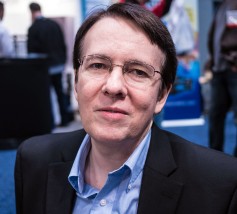 He noted that it could come down to television set manufacturers, who have a big interest in which audio system they have to put in future television sets. He suggested that Samsung could have a huge influence in the final choice.

Jim Starzynski, principal engineer and audio architect at NBC Universal, is chairman of the ATSC 3.0 audio committee. At a Dolby function at AES last week, he said he is sworn to secrecy to talk about what is going on inside the committee.

But, he said, the goal is to have a candidate standard before the end of the calendar year.

There is some urgency for the audio standard because South Korea needs the complete ATSC 3.0 system to produce the Olympic games in 2018.

“A lot of broadcasters have told me they would like to coordinate the move to the ATSC 3.0 standard with the spectrum repack that's going to happen,” said Fraunhofer’s Bleidt. “So repack plays into this as well.”

Either system chosen abandons an ancient audio transmission system. The new technology will work equally well across IP and broadcast platforms, allowing users to easily send audio to any device at any place. Audio can be sent via 4K, HD, mobile or any combination within a single channel.

Dolby AC-4 claims to provide a complete and robust format designed to work with Dolby solutions that span content creation, distribution and interchange, and consumer delivery.

For example, sports fans can decide to focus on the announcers or just listen to the crowd and imagine they’re in the stadium. Dolby’s dialog enhancement technology will make it possible for viewers to adjust the level of dialogue to their taste.

Giles Baker, senior vp of the Dolby Labs broadcast business group, said AC-4 is “a complete, ready-to-implement package with clear and affordable pricing from a company that has been a reliable partner to the broadcast industry for decades.”

With Dolby Atmos, audio that can be placed and moved anywhere around the viewer, including overhead. It allows broadcasters to scale the audio experience based on the receiver a viewer is using. Full-featured devices can deliver the fully immersive Dolby Atmos experience.

Dolby AC-4 also has native loudness and dynamic range control and the technology intelligently manages loudness and program dynamics while ensuring that compliant work done in production is not compromised. It features built-in self-configuration and automation tailored for day-to-day broadcast operations — including synchronized bitstream switching aligned with video.

MPEG-H 3D Audio, part of an alliance made up of Fraunhofer, Technicolor and Qualcomm, supports coding audio as audio channels, audio objects or higher order ambisonics (HOA). It can support up to 64 loudspeaker channels and 128 codec core channels. Objects may be used alone or in combination with channels or HOA components.

The use of audio objects allows for interactivity or personalization of a program by adjusting the gain or position of the objects during rendering in the MPEG-H decoder. It also claims a 50 percent reduction in bit rate compared to current technology.

On April 10, 2015, the MPEG-H alliance demonstrated a live broadcast signal chain consisting of all the elements needed to implement MPEG-H based audio in broadcast television. The demonstration featured a simulated remote truck at a sports event, a network control center, a local affiliate station and a consumer living room.

The audio was produced and encoded through an MPEG-H audio monitoring and authoring unit, MPEG-H real-time broadcast encoders and real-time professional and consumer MPEG-H decoders. The audio was decoded in the consumer living room on a Technicolor set-top box.

In April, the ATSC announced that the systems from Dolby Laboratories and the MPEG-H Audio Alliance would be tested in the coming months for use as the audio layer for the ATSC 3.0 signal. Both passed the tests.

Audio is one of twenty standards to be selected over the next year to be part of ATSC 3.0 package. If all goes well, the standard would be finalized in time for the repacking of TV stations that begins next year.

Ironically perhaps, the ATSC 3.0 standard may go beyond many broadcasters. Though it is a broadcast standard, it is also an Internet standard, which could be used by online content distributors as well as traditional broadcast outlets.

“It is a correct impression that the ATSC is building a standard and no one really knows where it will go,” said Fraunhofer’s Bleidt. “There are too many different factors in play right now.”