Engineers face new challenges in measuring 12G-SDI signals, which require different techniques compared to those used with SD-SDI, HD-SDI and 3G-SDI signals. Here we will touch on the importance of signal shape, the impact of jitter and the complexities of the different interface formats.

With the advent of SD-SDI, HD-SDI and 3G-SDI, the measurement of Eye Diagram shape and jitter became an everyday task to ensure that signals were correct and transmission was maintained. Measurements being made at the transmitting equipment end ensure that the best signal is available at the receiving equipment end.

Until now the Eye Diagram was basically a square wave (with harmonic distortions) which allowed the amplitude, rise time, fall time, overshoot and undershoot to be measured relatively easily and accurately. For 12G-SDI the signal shape has effectively become a sine wave which is inherently harder to measure consistently. Most engineers are familiar with looking at signal quality via a 'eye pattern'. However, with 12G signals, the tolerance for cable length is much more critical. In this example, the HD-SDI cable path was 220m but the12G-SDI signal was good only out to 60m.

The signal shape is critical for 12G-SDI, primarily the rise and fall times, because these determine the total cable length that the signal can be sent through and successfully decoded. For HD-SDI this was 220m but for 12G-SDI it is more like 60m.

Cable quality, type and length all have an effect on the signal shape because of the attenuation of the much higher frequencies present in 12G signals. Over a 1m length used for measurements these should not, however, have a significant impact.

Infrastructure components including connector types, patch panels, cable joiners, T-Pieces, termination pads and loop through connections will also have a significant impact on the signal shape.

Amplitude measurement of a sine wave is more challenging than a square wave and there are two main ways of statistical analysis that provide the most consistent measurement. Ideally automated measurements should always be used to avoid inconsistencies.

Jitter measurement is a significant part of physical layer analysis as it ultimately determines whether or not that there will be errors in the data. With 12G-SDI this has become a big challenge. With the 12G-SDI interface the maximum permitted jitter is 8UI (for frequencies from 10Hz to 3.75kHz) whereas for an HD-SDI maximum jitter was only 1UI. 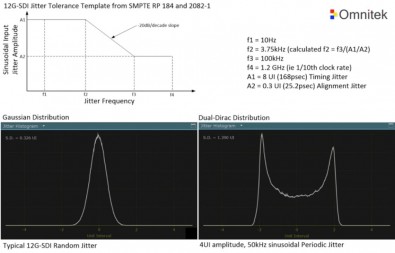 Jitter measurement. There are two main types of jitter, Random Jitter (RJ) and Deterministic Jitter. A thorough test for both is a requirement to maintain reliable 12G signal paths.

There are two fundamental categories of jitter, these are Random Jitter (RJ) and Deterministic Jitter (DJ). Random Jitter is noise that cannot be predicted as it has no discernible pattern and due to its random nature will have a Gaussian distribution over time as can be seen in the diagram (above). Deterministic Jitter is repeatable and the peak-to-peak value of this is therefore predicable. This jitter category is subdivided into Periodic Jitter (PJ), Data-Dependent Jitter (DDJ) and Duty Cycle Jitter (DCJ).

All receiving equipment needs to be Jitter Tolerant to a specified level for each frequency band to cope with Output Jitter from sending equipment.

Jitter Transfer is an important factor as this can accumulate through an equipment chain. In 12G-SDI systems the jitter from one device can be transmitted to the next and the resulting level of jitter at the final receiver may be too large for it to cope with.

Jitter can be measured using a range of tools including:

Many adopters have implemented systems using Quad Link (4 x 3G-SDI) to transfer the image as four quadrants of 1920 x 1080 to assemble the 4K / UHDTV 3840 x 2160 image using the Square Division approach. All of the current SMPTE specifications covering 4K / UHDTV, however, have defined the 2 Sample interleave method that uses four sub images and alternates the samples every two pixels (as a luma and chroma sample pair) and every line, instead of splitting the image into four quadrants. The 2 Sample Interleave method being preferred as the receiving equipment does not require a frame store to reassemble the image and this does not introduce any significant delay into the video path.

The SMPTE standards are complicated by the number of different interface combinations that are available. This can make it difficult to understand and to check that the correct data is in the correct place when converting between different cable interfaces. For example for Quad-link 3GA there are four streams (which are essentially four HD images) and for all other 4K standards there are eight ‘streams’. For Quad-link 3GA the luma and chroma channels are assembled in pairs on four streams rather than on the eight separate streams. This example shows how a Square Division or 2 Sample Interleave source is mapped on to a 12G-SDI cable.

Even though there are four sub-images shown in the diagram above, these are virtual images that do not actually represent four cables. From these four ‘sub images’ come eight ‘streams’ (a luma and chroma pair for each virtual image). These streams are then multiplexed on to the physical cable(s) in the data order defined by the cable interface being used.

In the color-coded diagram above, the Omnitek Ultra 4K Tool Box “Data View” (left) shows the eight ‘streams’ from the four sub images and the “Cable View” (right) shows how these streams are actually multiplexed on the single physical 12G-SDI cable.

The remaining challenge for anyone wanting to test 12G-SDI interfaces is finding the most appropriate test and measurement equipment. For those with deep pockets, high-end Real Time oscilloscopes are available. These, however, are complicated to use and do not necessarily provide the portability and reliability required in most test environments.