Boats laying the new Hibernia Express cable as it approaches the shores of Ireland.

In September 2015, Hibernia Networks launched the first trans-Atlantic submarine cable since 2003. The new Hibernia Express cable is the first system optimized for low latency. This article focuses on the latency proposition of the new cable system.

Hibernia Networks, a leading provider of high speed global telecommunications services, recently announced that its new Hibernia Express transatlantic cable has an actual tested latency of better than 58.95ms (milliseconds) from New York to London, which is faster by more than half a millisecond off the original projected speed.

Network latency is the time it takes for data to traverse a network. A variety of sources contribute to latency, including network congestion, over-utilized routers, and firewalls. A primary source of latency is distance. Propagation delay refers to the time it takes for a signal to traverse fiber. Light travels through fiber at roughly 203,000 kilometers (126,138 miles) per second, which is about two-thirds the speed of light through a vacuum.

The most commonly-used metric to express network latency is the round trip delay (RTD). RTD is the time required for a signal to travel in both directions over a link. Each 1,000 kilometers (621.3 miles) of route distance produces approximately 10 milliseconds RTD.

When signals travel between two locations, the distance they traverse varies depending on the network infrastructure, primarily the path of the transmission lines. Network operators lay submarine cables on paths precisely designed to avoid major fishing areas, anchoring zones, sensitive environmental areas, earthquake-prone zones, and other hazards. Each submarine cable follows a unique path and latency varies considerably among cables. To optimize latency between locations on either side of an ocean, a submarine cable operator would lay the cable on as straight a path as possible, given the profound effect that distance has on RTD.

Reducing latency improves network performance. Latency has become a critical performance factor for financial firms, content providers, and cloud computing providers. In the case of financial enterprises, reducing the delay by as little as a few milliseconds can impact the profitability of trading operations. For high frequency trading, having the lowest available latency between trading centers is paramount. These trading firms have an interest in measuring predictable latency down to the nanosecond to tune their algorithms for maximum gain. 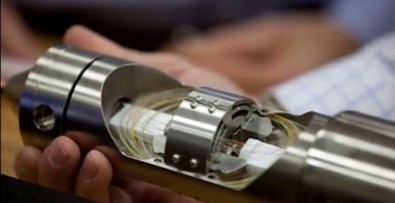 Low latency also helps maintain responsive performance for users of networked services. Online search companies, including Google and Bing, report that increased latency leads to decreased click-throughs and search result views, which directly impacts the success of their businesses. Online retailer Amazon has claimed that every 100 milliseconds of latency reduces its sales by 1 percent.

How did Hibernia Express reduce latency?

The key to latency reduction on the Hibernia Express cable system is the routing of the cable along a most direct path across the Atlantic. Hibernia Express takes a considerably shorter route than existing systems. Accomplishing this required the cable path to traverse more hazardous shallow water than previously tolerated by trans-Atlantic cable designs. To mitigate the risk of cable damage by ship anchors and other hazards of shallow water, installers buried heavily armored cable in the ocean floor for nearly 2,000 kilometers. Existing cables avoided the more direct path to spare the additional expense associated with extra armor and burial. Hibernia Networks expects Hibernia Express to have subsea RTD between Canada and the United Kingdom of approximately 45 milliseconds, which is more than 20 percent less than the next lowest latency cable, Atlantic Crossing-1 South, as illustrated in Figure 1 below. 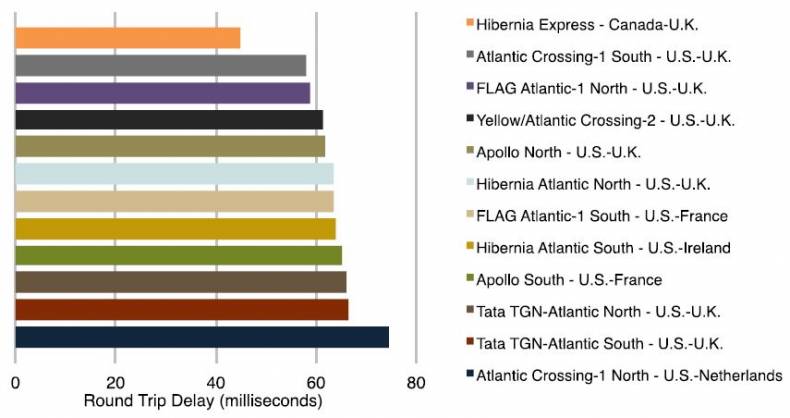 Figure 1. Data shown are round trip delay latencies measured in milliseconds between cable stations and do not factor in additional latency introduced due to backhaul or local access. Data for TAT-14 is unavailable. Source: TeleGeography 2015.

While Hibernia Express has the lowest trans-Atlantic subsea latency, customers seeking the lowest-latency paths between specific locations must also consider the sum total of the latency on backhaul, the fiber that links the cable landing stations to points of colocation in city centers.

To further reduce the total latency, Hibernia Networks has also constructed new backhaul routes in both the United States and United Kingdom, which have further lowered the end-to-end latency between London and New York. Building an end-to-end optical network in this way avoids integration of third-party segments, allowing a supplier to maintain control of latency performance and extend that predictability to customers who otherwise would have to monitor sources of latency from multiple network operators.

What are the benefits?

Hibernia Express is expected to provide the lowest latency path between London and New York. The latency edge on this span will also enable the low latency connections for additional routes valued by the financial trading community such as Chicago–Frankfurt.

Hibernia Express is also the first trans-Atlantic submarine cable to enter service since 2003. It takes advantage of the latest technology to offer a design capacity of 53 Tbps, which will allow it to provide a long-term solution for customers with fast-growing bandwidth requirements.