Since the dawn of television, studios around the globe have relied on coaxial cables to connect the broadcast world: cameras to recorders to mixers to routers to encoders. But studio coax may be on the brink of extinction. Like their colleagues in headends and uplinks, video engineers are swapping 75-ohm coax for IP cables.

IP already dominates the world’s traffic; it manages, routes, and connects virtually every audiovisual and data service. So why has baseband video escaped for so long?

In the past few years, contribution networks from stadia to studios and other venues have been increasingly modernized, and coaxial replaced with direct IP connections. At the edge, we still have our tried and tested coax, but almost immediately we convert to IP for routing from point to point and multipoint. Now, even that last bulwark may be about to crumble. The industry is poised to upgrade those last few feet at the network edge to all IP, and we will see the end of coax as we know it.

History Repeats
A decade or so ago, cable headends were rolling out a new service called “Video on Demand” (VoD). This new class of narrowcast video required massive bandwidth from video servers to quadrature amplitude modulation (QAM) equipment. The first deployments used asynchronous serial interface (ASI) coax links. When scaling those connections to meet the demands of even the most modest headend, however, it very quickly became obvious an alternative was needed. Waiting in the wings was Gigabit Ethernet: commoditized in the datacenter world, easily cabled, switched and routed using enterprise iron. In a matter of months, ASI was abandoned in VoD systems.

Over the next few years, the rest of the headend infrastructure was converted from a point-to-point linear chain of ASI gear to all-IP switch and routing infrastructure. It wasn’t long before headend engineers and equipment makers exploited this new architecture to develop novel services. New architectures like switched linear broadcast simply would not have been viable in legacy environments.

Today, the same trend is unfolding in the broadcast studio. As more video services migrate to IP, the lure of new efficiencies and operating models that are possible in an end-to-end IP broadcast environment becomes too tempting to ignore.

Why now?
The industry has been discussing the migration to all IP for a long time. Standards have been written, demos been done, and equipment makers have produced a seemingly endless range of widgets and gadgets to help us make it a reality. So why is this change finally happening now?

A nexus of three events is propelling the IP shift to a tipping point: 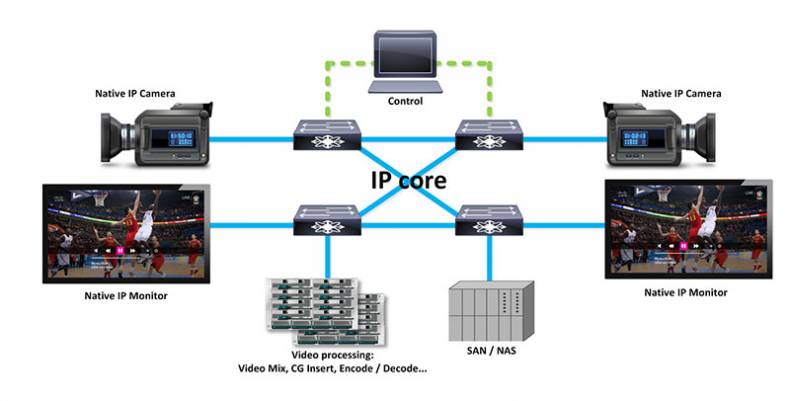 Unlocking the Potential of End-to-End IP
SMPTE-2022 is playing a central role in the industry transition to the all-IP studio by providing a suite of standards concerned with the transmission of compressed and uncompressed video over IP. SMPTE-2022-6, in particular, provides a wrapper that encapsulates uncompressed baseband video like SMPTE 292M (and other signals), so that it can be carried in IP frames.

Once these signals can be carried as high-bit-rate IP traffic, studios can take advantage of a wide range of existing, standardized IP mechanisms to optimize media transport. (Table 1 offers some examples.)

When deployed as part of an end-to-end IP environment, these mechanisms can provide a number of advantages, including:

No Need to Fear IP
Part of the hesitation to use IP is based on the misconception that just because you are using IP, you must converge your networks – or even worse, that your mission-critical traffic is now going to behave like the “best-effort” traffic delivered over the Internet. Fortunately, neither of these concerns is accurate.

IP is inherently flexible; there is no reason you can’t build a completely isolated IP domain for your live video, just like your HD-SDI cross-point matrix is today. The benefit of IP is that you can choose when to expand and converge services. One common model in IP studio environments today is the mixing of large asset transfers with contribution links, so when feeds are not live, the bandwidth is reused to move assets around, and vice versa. This use case is especially useful in scenarios where the file transfers are for backup/archive, and so can operate on a best-effort basis.

What about AVB?
Audio Video Bridging (AVB) often gets brought up in discussions of the studio environment of the future. AVB is a suite of standards developed by the IEEE specifically for carrying time-sensitive data across networks. Its origins are in consumer, automotive, and some professional audiovisual applications. The standard includes some capabilities similar to IP, such as time synchronization and bandwidth reservation.

The drawbacks with using AVB today, however, are its limitations with regard to layer-2 switching, which effectively constrain deployments to islands. Extending to layer 3 is a necessity for most medium-to-large real-world deployments. Work is ongoing to address the layer-3 limitations of AVB, however, the solutions chiefly involve enabling tunneling between islands. The key difference between this approach and that of SMPTE and AES67 is that the latter approaches begin natively at layer 3. It remains to be seen if AVB – with some extensions – will be deemed “good enough” for professional audio and video.

In addition to those described previously, expect other IP standards to be adopted into the suite of recommended features for broadcast equipment. Part of the attractiveness is the sheer number of complementary standards and protocols in the IP stack that can be leveraged “off the shelf.”

What new and exciting things will a move to pure IP end-to-end allow us to do? Here are some possibilities:

All of these opportunities, and others we have not yet imagined, become possible in an end-to-end IP environment. It is not a question of if we will see them in the studio, but when. As with similar digital transformation trends, it will happen faster than we expect.

The rapid growth of IP connectivity and with increasing speed makes the ability to move video over IP a proper application.