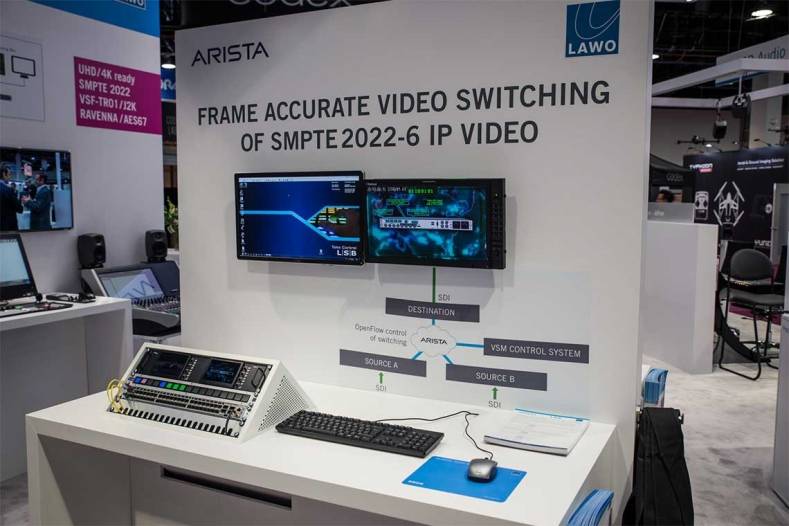 While the Television industry has been well served by SDI Baseband technology including routers, coax cable and BNC connectors, new IP-based video/audio infrastructure and workflows are promising far more flexible and cost-effective solutions in the future. However the new IP-based world must still interoperate with and build upon existing Baseband technology. This Lawo / Arista Networks White Paper explores a practical technology solution: A Software Defined Video IP Network using Lawo¹s Encapsulators, Gateways and Edge Processors, integrated with Enterprise-level high performance IP switching from Arista. The combination promises to advance and automate Television work-flows to meet near and long term demands of production, contribution, distribution and content delivery… and do it cost effectively.

The migration of the Broadcast world to IP infrastructure is definitely under way as evidenced by early adoption in some very large and influential television facilities already using IP Network architectures.

The establishment of IP Video Routers and IP Networks in television over the next several years requires substantial efforts by Broadcasters and broadcast equipment suppliers, similar to the efforts we saw in the transformation from analog to digital television which took over a decade to be fully realized. This new paradigm shift merges the disciplines of Broadcast and IT, which requires cross-functional skills and knowledge that is sure to keep the industry busy for years to come.

The move away from proprietary and bespoke broadcast technology will eventually change the approach for many types of productions, creating new workflows which are difficult to envision today. But the migration from SDI Baseband to IP Video Routing/Networking is ESSENTIAL and TIMELY.