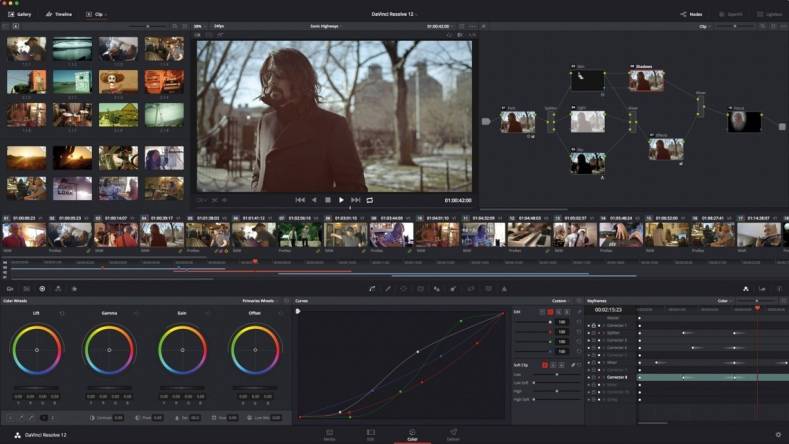 This is part three of a multipart part series on using Blackmagic's DaVinci Resolve, version 11. Part 1 can be found here, detailed how to round-trip between FCP X and Resolve. Part 2 can be found here and it described how to use Resolve as an NLE.

Neither article covered the actual task of grading. There are many good video tutorials on grading, but most do not cover three topics: how to set Resolve preferences, how to import compressed and uncompressed media; and grading goals. I’ll cover all three topics in this tutorial.

Resolve can import two very different types of media: compressed video formats such as ProRes and RAW data such as carried in CinemaDNG files. Before importing RAW you need to set Camera Raw Preferences. Figure 1 shows my settings for the Digital Bolex camera that records RAW with no compression 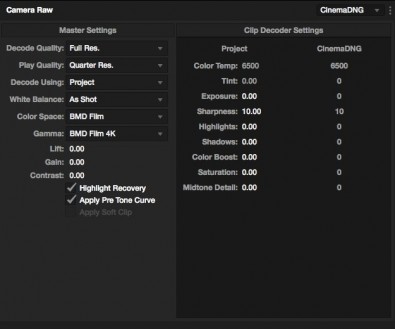 When grading RAW footage in the Color room you need to select the camera icon as shown in Figure 3. Your first goal is to obtain a “healthy” image as shown by all four scopes: waveform, RGB parade, histogram, and vectorscope. (You will use all four scopes when grading.)

Figure 3 shows a well exposed RAW image. As shown by the waveform scope, no clipping is present. The bulk of the signal is, however, below the 512 level as displayed by the histogram. (Unlike the waveform and RGB parade scopes that utilize a scale tied to legacy 10-bit hardware, the histogram scope reads-out directly in percent.) 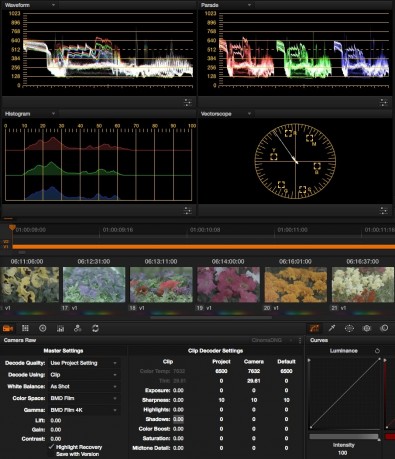 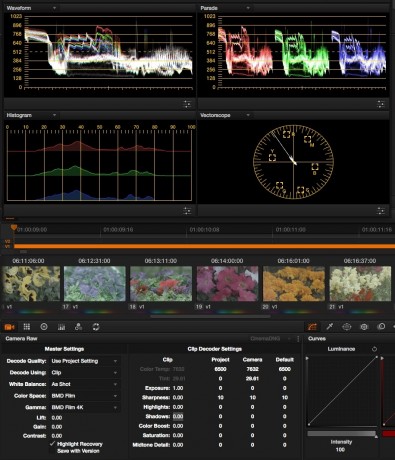 Next, adjust the Shadows slider leftward to reduce the signal’s lowest level to
zero or as close as possible. Some editors prefer to use 128 (13%) as the
minimum level. Monitor the RGB Parade scope to prevent a color component from
going below zero. See Figure 5. 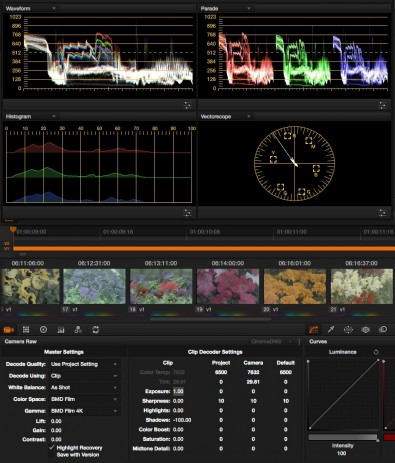 Now adjust the Highlights slider rightward so the signal’s components reach, but do not exceed 1023. Some editors prefer to use 896 (90%) as the maximum level. RGB Parade is ideal for checking that no color component exceeds 1023. See Figure 6. 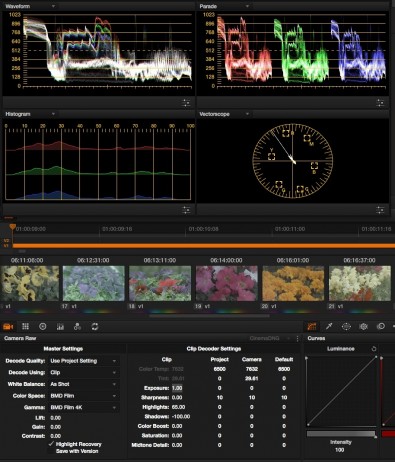 When an image’s signal strength is weak, the viewer will show what looks like an
underexposed image. (See Figure 7.) However, with RAW data, unless the signal
is nearly flat, adjustments typically can be made to make the signal useable.

As shown in Figure 8, you can increase the Exposure setting from 0.00 to raise the signal to center it at 512. (Use the white segments of a waveform to determine signal strength.)

Because you are increasing gain, noise will also be increased. Underexposure is very common when a shooter exposes “protect highlights.”

Now lower Shadows to decrease the signal’s lowest level to zero, or as close as possible. See Figure 9.The white segment of the waveform – ignore the blue blur – defines signal strength at the lowest point.

Next, increase the Highlights setting so signal components, as shown by RGB Parade, reach but do not exceed 1023. See Figure 10. The white segment of the waveform – again ignore the blue blur – defines signal strength at the highest point.

When an image’s signal strength is strong, the viewer will show what looks like an overexposed image. Overexposure of RAW is no problem as long as clipping only occurs on small or white objects. For example, a bright desklamp. Figure 11 shows one area, the bright wall, that is clipped. No matter what adjustments you make, this area will always be white with little or no detail.

Ignore the area with clipping when lowering Exposure to decrease the signal to center it at 512. The waveform scope provides insight into the signal’s vertical position. See Figure 12.

Next, use the Shadows slider to decrease the signal’s lowest level to zero, or as close as possible. See Figure 13.

Now increase the Highlights setting so the signal’s components, as shown by RGB Parade, reach but do not exceed 1023. Ignore the area with clipping when you increase Highlights. Let the clipped segment move above 1023. It will appear as white now and also after export when Super White information has been discarded. See Figure 14.

With exposure set, you have the option to correct errors in color temperature and tint. To do so, switch Color Balance from As Shot to a specific temperature (such as Cloudy) or set it to Custom. When set to Custom you can adjust Color Temperature and Tint (Green to Magenta).

With DaVinci Resolve growing in popularity for working with both RAW and compressed formats, its reasonable to expect more of those working in post to begin to use it.

You can read Steve Mullen's previous two tutorials on the use of Blackmagic's Resolve 11 on The Broadcast Bridge.

Other Steve Mullen tutorials in which you may be interested: 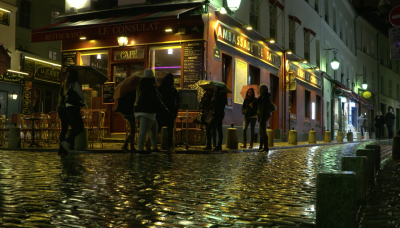