Video Expert Steve Mullen looks inside both Blackmagic’s Resolve and Apple’s FCP. Some key differences are important to understand before starting the edit process.

Sometimes solving a problem opens-up new opportunities. I had this fortunate experience when editing, in FCP X, 8mm Kodachrome II shot in 1966 using a Bolex H8. Kodachrome II was a 25 ASA film that was available from 1961 until 1974. (Super8 film became available in 1965.)

Because 8mm Kodachrome II was a reversal film it had minimal latitude: one- stop over and two-stops under — for a range of only 4-stops. To prevent burned- out highlights, typically it was shot about 1/2-stop under, which could yield great looking images.

However, when under-exposed, not only was the image dark, an ugly green color shift could occur as shown by Illustration 3.

The 8mm film had been frame-by-frame transferred to SD video. (Each film frame was stored as one video frame of SD video.) After I had trimmed almost 2 hours of film to under 15-minutes, I began to grade each clip using the FCP X Color Board. The FCP X Color Board does not have these functions: industry-standard color- wheels, YRGB sliders, YRGB curves to correct non-linear luma and chroma errors; a hue control; the ability to view up to four scopes simultaneously; plus double monitors showing a reference and current frame. Illustration 5 shows Media Composer’s Color Tool. After correcting half of the project’s clips, using the FCP X Color Board as well as plug-ins such as Hawaiki Color, I was not getting the results I needed. Illustration 6 shows the project in FCP X. 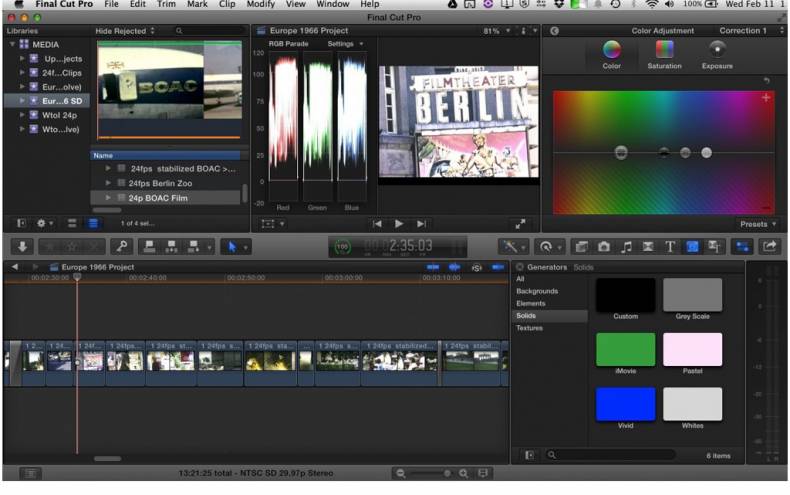 At this point, I decided to send an XML file to DaVinci Resolve. After grading in Resolve, an XML file would be used to round-trip the project back to FCP X.

You must make all your source media available to Resolve. To keep your media outside of an FCP X Library, when importing media click “Leave files in place.” Store media in a root folder, with an alias moved to the Movies folder.

In FCP X, issue the Files > Export XML command and select a folder that contains all the necessary media. 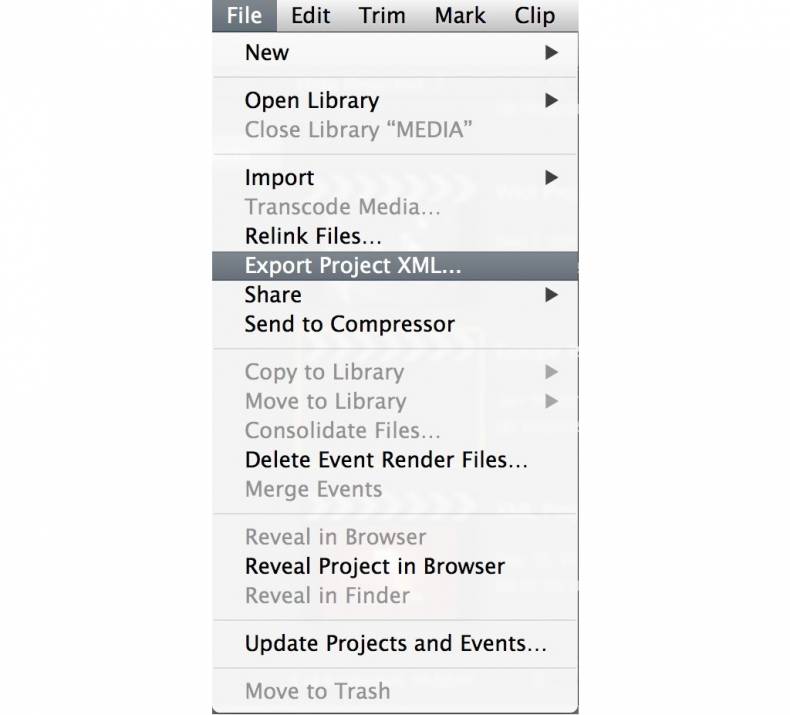 After launching Resolve, enter the Edit Room and issue the Files > Import AFF/EDL/XML command. Browse to the root folder and select the .fcpxml file. The dialog box shown in Illustration 9 will now appear. 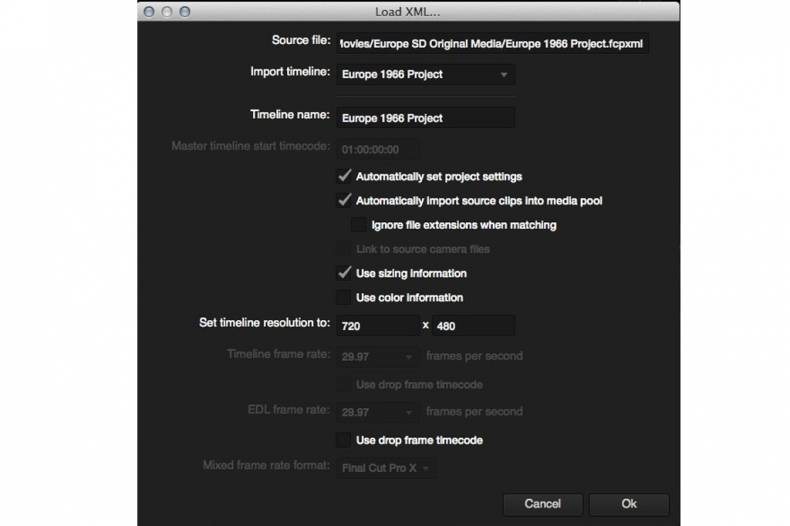 Resolve will fill its Media Pool with source clips and populate a new timeline with the contents of the FCPX timeline as shown in Illustration 11. Save and name the project. 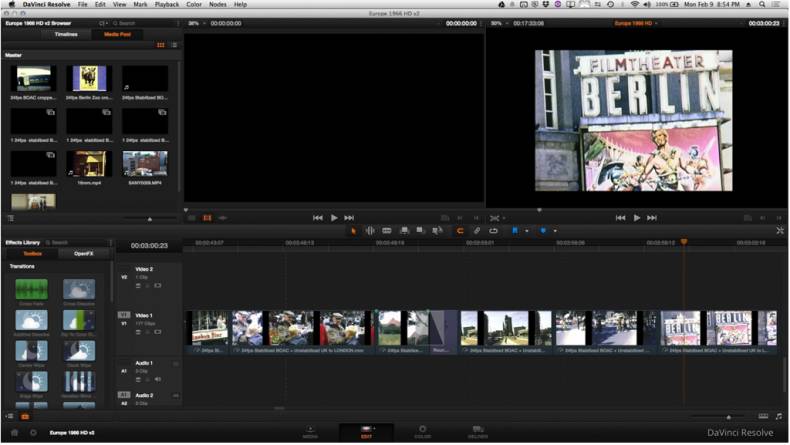 To begin grading, enter the Color Room. Illustration 12 shows: the Primary YRGB sliders, YRGB curves, the keyframe edit window, and a two scope (waveform and RGB parade) window. (Up to 4 scopes can be displayed.) Back in FCP X, issue the Files > Import > XML... command. Browse to the folder that contains the XML file. Click Import. 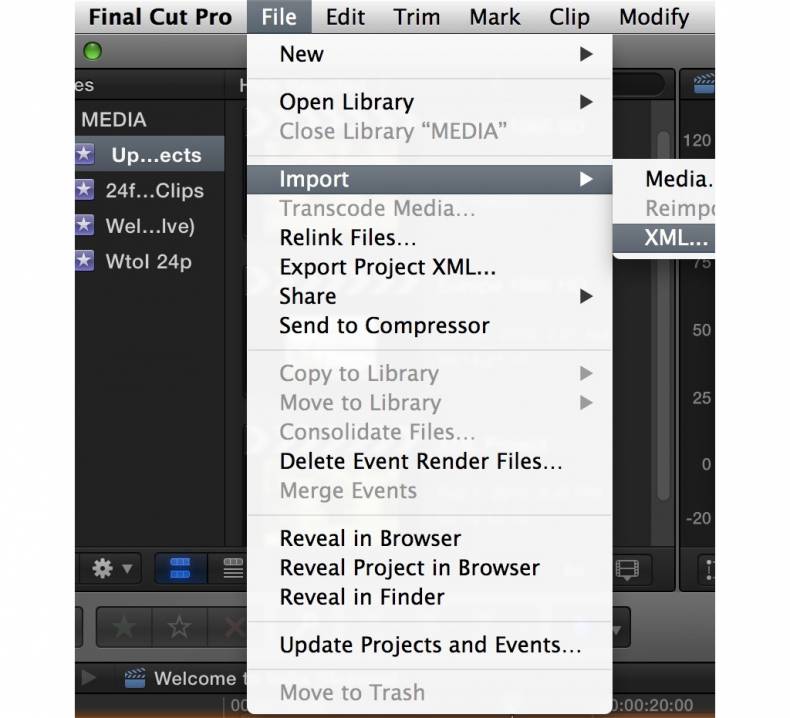 When I imported the Resolve XML into FCP X, I encountered the error message shown in Illustration 15. Others have posted that this message appears to be related to mixed frame-rates in the FCP X project. However, my project’s clips all had the same frame-rate.

After clicking OK, the project and corrected clips will load into an Library Event. Double-click the project icon and the timeline will open with the contents exported from Resolve. Random frame errors were either in the imported XML or created by Resolve. This error message presented a new problem for me to solve. In working it, I discovered round-tripping was more complicated than I had initially thought.

My guess was the message resulted from my failure to disable or delete all effects in the FCP X project. (Which turned-out to be true, but was irrelevant.) Rather than examining almost 200 clips, I created a clean but complex project.

I exported this project, imported it into the just released Resolve 11.2 where I corrected its clips, exported it, and imported it back into FCP X. I repeated this experiment until everything in the project came safely back into FCP X. The timeline that survived the round-trip is shown in Illustration 17. 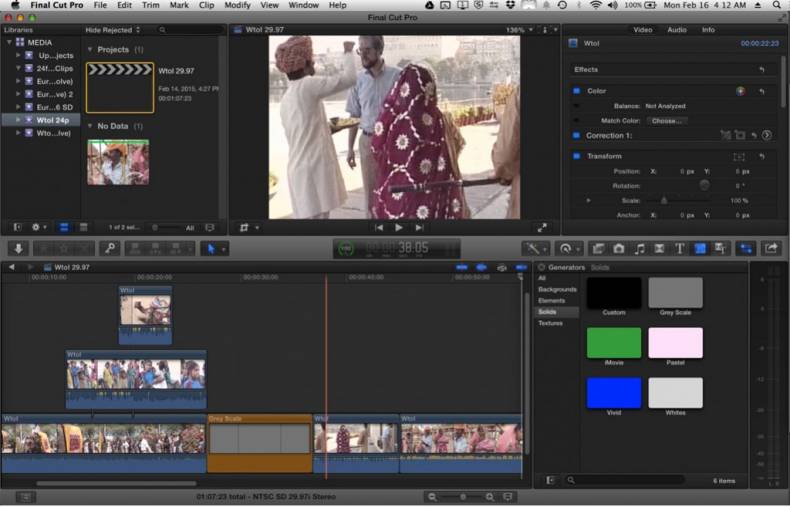 A safe project can include stacked clips, each with sync audio; a “gray scale” effect as a placeholder other generator effects; and a cross dissolve as a placeholder for other transitions. However, I would not add dissolves because they make grading more difficult. I have since learned other items cannot be round-tripped: Compound clips, Markers, the Ken Burns FX; Primary and Secondary Color Corrections, most Effects, some 3rd party plugins, and Titles. The key is to round-trip as soon as the edit is locked — before effects are added.

When the clips you export in an XML file have no handles, after they are round- tripped there is no way to length them as you fine-trim your project and add transitions. Therefore, when you initially fill an FCP X timeline you should add clips to the timeline with an extra second of media at the in-point and out-points. These handles absorb frame errors when they occur.

Illustration 18 shows the project in Resolve’s Edit Room. Note that Resolve splits audio from video. While you can play the project to confirm the transfer was successful, I recommend not editing the imported project. Illustration 19 shows how the project’s five clips are presented in the Color Room. The three stacked clip thumbnails appear in the order they appear in the XML. This makes grading straightforward. Illustration 20 shows the video and audio structure of the timeline in Resolve’s Delivery Room. I suggest playing through your project to check for correction errors before export. In addition to creating an XML for FCP X, one can also export a ProRes or H.264 movie. Although one cannot specify the bit-rate of H.264, I measured it at 24Mbps. Even though my safe project repeatedly survived round-tripping, the frame-error message always appeared during import into FCP X.

After round-tripping the 8mm project I checked for frame errors. I found 5 in the 13-minute project. illustration 21 shows, starting at the upper-left: the last correct frame in a clip; two uncorrected frames that intrude at the end of this clip; the location where these frames were pulled from (about 8-seconds later); and a corrected version of the under-exposed image shown in Illustration 4. While it took extra work to finish my 8mm project, with what I learned, my next round-trip will be far easier and faster.