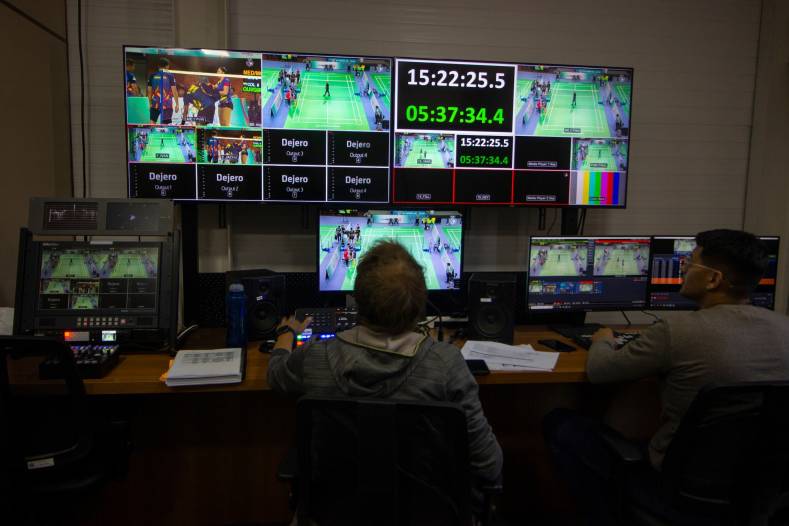 Dejero supported Quality, leading international production company and joint host broadcaster, for the XII South American Games in Asunción, Paraguay, as they made television history with the first ever all-remote multi-sport production.

The XII South American Games involved a record total of 4,526 athletes and 53 sports. Quality deployed more than 90 cameras to capture live sports in various arenas and other locations across the city.

Each camera was connected to a Dejero EnGo LTE mobile transmitter using Smart Blending Technology that dynamically and intelligently managed the fluctuating bandwidth, packet loss, and latency differences of individual connections in real-time to simultaneously combine multiple IP connections. Here, they are blending a combination of fiber at the venues and 4G cellular connectivity from diverse local network providers; TIGO, CLARO and PERSONAL, forming a virtual ‘network of networks’ and achieving average upload speeds of 20mbps.

As the EnGo provides uninterrupted connectivity from any location, the producers, directors, graphics operators and technicians remained in Buenos Aires to package content for distribution from the hub. A microphone at the hub was also connected by an XLR audio cable to a WayPoint receiver, so the director could communicate with camera operators using the EnGo IFB voice communication feature.

The EnGo mobile transmitters, which have a sub-second glass-to-glass latency, reliably transported feeds from the fixed sports venues and roaming cameras at the XII South American Games to 23 Dejero WayPoint receivers located at the IBC in Asunción.

Ten additional WayPoint receivers, located at Quality’s Buenos Aires hub, reconstructed and decoded the video feeds which were entered into a matrix to be shared with the switcher and replay systems. The packaged content was then uplinked via satellite for distribution to the Rights Holding Broadcasters (RHBs) and inserted into the ingest system for logging and clipping. The RHBs include national local broadcasters, TIGO and Paraguay TV, as well as TyC Sports in Argentina, TVN Chile, CDO Chile, COB Brazil and Panam Sports.

Using this new remote production model, Quality only sent the EnGo transmitters and camera operators to the sports venues. And, because the devices are easy to operate and don’t require a complex setup, the camera operators and crew were ready to go live within minutes.