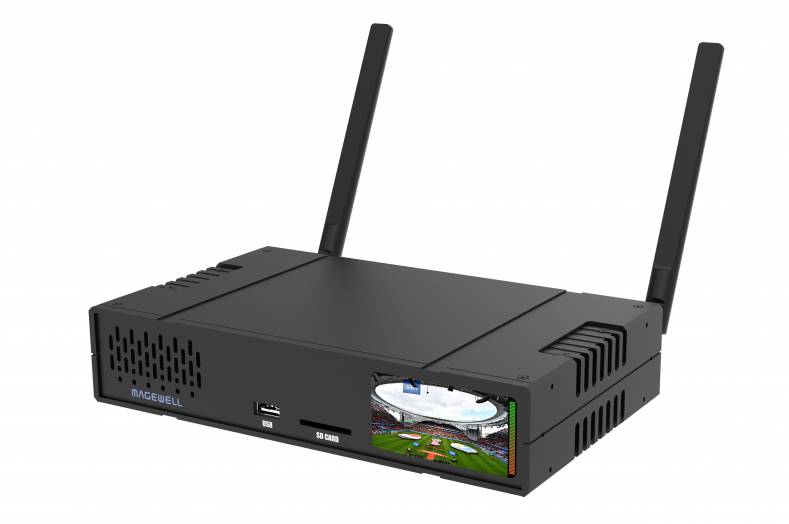 Magewell has unveiled a powerful new flagship model in its Ultra Encode family of universal live media encoders for applications ranging from live streaming to IP-based production and AV-over-IP. The new Ultra Encode AIO builds on the flexibility of the company’s original Ultra Encode models with expanded features including HDMI and SDI input connectivity in a single unit; 4K encoding and streaming from the HDMI input; simultaneous multi-protocol streaming; higher streaming bitrates; file recording; and much more.

Ultra Encode AIO supports multiple video encoding formats – including H.264, H.265 (HEVC), NDI|HX 2, and the new NDI|HX 3 – and a wide array of delivery protocols including RTMP, RTMPS, SRT, RTSP, RTP, HLS, and TVU’s ISSP technology. Video can be encoded at resolutions up to 4096x2160 at 30 frames per second from HDMI sources, or up to 1080p HD at 60 fps from the device’s 3G-SDI input.

The single-channel Ultra Encode AIO can encode one live input source – either HDMI or SDI – or mix video from the HDMI and SDI inputs (picture-in-picture or side-by-side) into a combined output. Video can be encoded at bitrates up to 32Mbps, while up to eight channels of audio can be encoded in AAC format. Two concurrent encoding profiles with distinct combinations of resolution, frame rate, and bitrate can be specified, and up to eight user-configurable overlays – including text, images, and a clock – can be applied to each profile.

Ultra Encode AIO can be configured, monitored, and controlled through its browser-based web interface – accessible through any computer or mobile device, with an optimized layout for smartphones – with centralized management of multiple units available through the Magewell Cloud software. In addition to manual control, scheduled streaming and recording are also available through the web UI, while the unit’s touchscreen LCD screen provides status information and snapshot previews. HTTP-based APIs are also available for systems integrators and third-party developers to incorporate Ultra Encode AIO into their solutions.