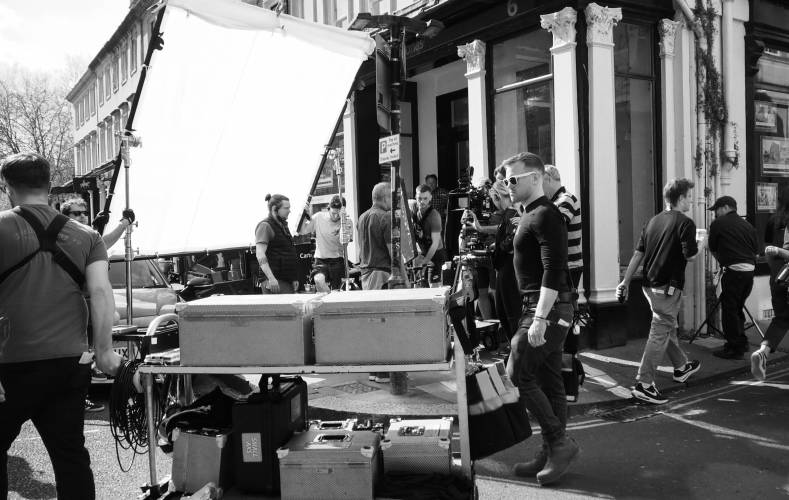 Anyone who’s tried to put together a film crew in the last few months will be painfully aware how difficult it can be to get qualified people. A commercial, music video or short often dovetails into natural downtime, so assembling people for short-term work remains relatively straightforward. For longer-term engagements, though, finding one of the UK’s 84,000 film and TV personnel with a few weeks’ contiguous availability has become more difficult as production volumes have ramped up.

And ramp up they have. The final quarter of 2022 saw a £1.19bn production spend in the UK alone, up nearly 40% on the previous three months, so it’s not hard to see why everyone’s working. That’s especially true after a pandemic which triggered what’s been called the great resignation, which led to huge numbers of people changing careers and potentially taking their skills with them. The situation leaves producers scrambling to match the champagne problem of overwork with the not-so-palatable issues of soaring crewing costs.

The numbers are eye-watering. Even non-specialist publications such as the Guardian newspaper have suggested a need for anything up to 30,000 new people, raising questions over how practical it is to quickly generate a cohort of new crew, equivalent to at least 35% of the existing workforce.

That sort of growth might never have been easy, but the industry must take some responsibility for making its own life hard. The manner in which new people are inducted to film and TV work has long been haphazard at best and downright exploitative at worst. For decades, film crew have been much more likely than the rest of the population to be self-employed; in 2019, 54% of UK crew were self-employed, compared to the 18% national average.

It’s also difficult to obtain reliable statistics about what sort of people have access to the work, how they got where they are, and even what they’re paid. BFI data suggests that of the 84,000 we mentioned above, some 80 per cent work in actual production (the remainder being in cinema exhibition, distribution, and other allied trades). The situation is probably similar internationally, as is the complete lack of formality which makes it hard to know how many people are entering or leaving the industry, how long they’re likely to stick around, or any of the statistics that a conventional workplace might record as a matter of course.

We could probably rely on experience to claim that that the vast majority of film crew are found through personal or family connections and required to undertake long, arduous apprenticeships at the whim of incumbents, with no guarantees of pay, career prospects or formal qualifications. Humans also have a tendency to recruit in their own image, and an even stronger tendency toward nepotism, as the prevalence of shared family names in specific departments of movie credit rolls sometimes illustrates.

In its seediest moments, the situation has sometimes bordered upon some of the nastier prejudices of which society is capable, though the need to spend one’s early twenties in an expensive city such as (assuming the mainstream western film industry) London, Los Angeles, Toronto or Sydney has long filtered for parental wealth as much as ethnicity, gender or aptitude. As early as 2011, the fashion industry was made the focus of a special investigative team from the UK’s tax authority on the suspicion that it had been abusing minimum wage laws with regard to people it claimed were interns; film and TV production has perhaps escaped a similar inquisition only by being not quite the worst.

Since all this became regrettably normal, the employment landscape has mutated out of all recognition. Netflix alone increased its production spend by more than a quarter even in the course of 2021, at the peak of the pandemic. Circumstances have changed since currently-senior people, those with de-facto responsibility for that ad-hoc recruitment process, became involved, shining an unforgiving spotlight on the fact that the historic approach has only a very limited potential to scale up.

Various solutions have been offered. Perhaps the most energetic engagement has come from rental houses, which have long been regarded – perhaps unfairly – as the training ground for new camera crew. The assumption that technicians will move on to crewing as quickly as possible has often left the facilities themselves short-handed and feeling responsible for training people whose expertise may not benefit the organisation which effectively paid for the process. Formalising that situation, though, has largely been done with the goal of keeping rental technicians working in rental, away from set.

Membership organisations representing specific on-set trades have sometimes tried to establish more formal training that might lead to more reliable prospects for both hirers and hirees, but it is not always successful and far from universal.

A cool-headed observer, however, might predict at least part of a resolution.

Perhaps most controversially, it’s reasonable to wonder if a reduction in workload may well be forced on us by circumstance. It’s common knowledge that the current rush to produce, particularly in high-end drama, is the result of two coincidental booms: peak streaming, and (tentatively) the end, or at least the reduction to a manageable level, of the pandemic.

For some time before coronavirus, streaming distributors’ business models had been quite openly based on attracting audiences with a constant stream of enticing new programming. Arguments about the commercial sustainability of multibillion annual production spends aside, the likes of Netflix, Amazon Prime and (latterly) Apple TV had created a cornucopia of production work that even leaked into secondary and tertiary regions where the best-funded employers had previously been absent. As a result, crew had been stretched even before the pandemic; to stick with the BFI’s UK numbers as an example, between 2010 and 2019 crew numbers had practically doubled and it was still widely considered insufficient.

Given all this we can safely imagine the big streamers being utterly horrified at an enforced two-year production hiatus. Some work did go on at various times in various places, but at vastly reduced rates and with significant extra expenses. The result left the electronic programme guides of the leading distributors draped in cobwebs, a cataclysm the prevailing business model had been built to abhor lest subscribers begin to lose interest. Worse, it happened at a time when home entertainment had never been more relevant. So, at the first possible opportunity, more or less every commissioning entity on the planet began commissioning everything it possibly could, all at once.

The demand part of the supply-and-demand equation, then, had become subject to a perfect storm driven by two combined issues. The question is whether that storm might soon blow itself out, and demand for crew might plummet.

Certainly the post-pandemic tidal wave can reasonably be expected to break after a while. The industry is attempting to clear a backlog, and on the fairly safe assumption that the production sector is currently operating somewhat faster than it did pre-pandemic, thanks to the sheer effort of the people who work in it, at some point that backlog will clear, and things might be expected, at best, to return to the status quo of late 2019.

Even that assumption, though, requires that pre-existing levels of production are maintained, and it’s far from obvious that will happen. Let’s consider Netflix as an example, for no reason other than that it is perhaps the most examined of the big players. Corporate entities of that scale and complexity are often hard to evaluate, but yes, the company is in profit and has been since at least as 2006, at a time it was still mainly shipping DVDs by mail. Conversely, while the company’s net income has grown since the early 2010s, its free cash flow has slumped; without going into the details, that’s a symptom of the frequently-mentioned need to spend less per subscriber on the madcap dash for a bulging slate of new material.

And in April this year, Netflix reported its first reduction in subscriber count in a decade. Should the pressure to reduce spending result in one or more of the biggest streamers stepping back from such a keen rate of production, the concomitant pressure on crew, as well as things like sound stage space and equipment, should ease. That’s not likely to be viewed as a good thing by everyone, but its overall effect on workers is likely to be a matter of degree. It seems desperately unlikely that the amount of production work will scale back to, say, 2010 levels; the instant popularity of video on demand suggests that some sort of streaming television market seems almost certain to endure. Still, as we’ve seen, there are reasons to suspect that the white heat of 2019 might not be something to bet on in the long term.

Either way, the situation for anyone in the final years of education who’s interested in film and TV work seems likely to remain more or less as it ever has been. The lack of any real structure to the way people are employed – even in jurisdictions with fully-empowered unions – both creates the problem and makes it very hard to solve. Pending a more comprehensive solution it’s clearly incumbent on everyone from producer to runner to help find new people and ensure they’re properly treated – not just because we need them, but in the hope that in a few years’ time they might treat the next generation just as well.