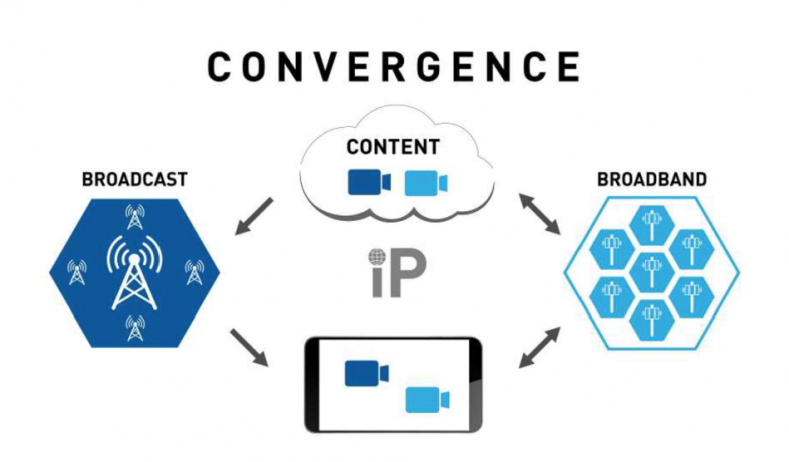 For broadcasters, the new D2M broadcast system will increase customer reach and enhance the ability to monetize the available spectrum.

As the U.S. continues to roll out NextGen TV services in markets large and small across the country, 5G wireless technology is being considered (and tested) to augment the OTA signal and provide a fast and accurate backchannel to users. Many say this strategy is a less expensive way of getting the signal on the air for users on the go.

In New Delhi, India, a group of the world’s smartest engineers at deploying the ATSC 3.0 NextGen TV system recently convened for a demonstration of a new mobile TV system that combines both the new transmission standard and 5G mobile edge computing. It will be initially used by the nation’s public broadcasting system.

For broadcasters, it will increase customer reach and enhance the ability to monetize the available spectrum, since anyone with IP content can plug into the converged direct-to-mobile (D2M) platform. Once a D2M network is rolled out, broadcasters can use such a network as a data pipe and deliver various applications apart from traditional TV, such as educational content, emergency alert system, disaster management updates, video on demand and firmware upgrades over the air for automobiles. It also enables the broadcaster to gather user statistics for targeted advertisements.

The conclave, entitled “Direct to Mobile and 5G Broadband - Convergence Roadmap for India” was organized by the Indian Institute of Technology Kanpur (IIT Kampur), in collaboration with Telecommunications Standards Development Society, India (TSDSI), at Akashvani Rang Bhawan auditorium on June 1, 2022. 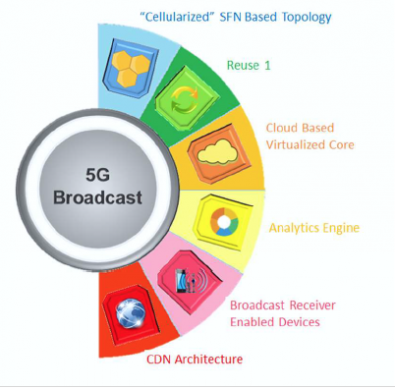 A converged NexGen Broadcast architecture is a confluence of multiple new technologies that can bring maximum value to OTA broadcasters.

The technology, called “D2M broadcasting,” promises to improve consumption of broadband while also making the most efficient use of wireless spectrum. In 2021, India had 1.2 billion mobile subscribers of which about 750 million were smartphone users. The number of such users is predicted to reach 1 billion users by 2026—as per Deloitte’s 2022 Global TMT (Technology, Media and Entertainment, Telecom) report.

The gathering in India demonstrated smart phones and other smart devices receiving NextGen OTA broadcast TV signals, in both stationary and moving experiments. A joint white paper on Direct to Mobile Broadcasting by the IIT Kampur, TSDSI and Prasar Bharati was also presented. What they all agreed on is that the most practical solution for satisfying the need for reliable connectivity is to create a converged network of broadcast, broadband & cellular networks.

In India, the cellular industry is adopting 5G at scale and the broadcast industry now has become a part of the internet, WIFI and 5G. Together, these will drive the next wave of digital transformation across the world, as connectivity forms the backbone of this new era. As the largest open market for digital video content and smartphone users, India’s challenges (network congestion) are unique as compared to the rest of the world. Therefore, India will benefit immensely from an indigenously developed converged broadcast–broadband network.

Those gathered—including Mark Aitken, Senior Vice President of Advanced Technology at Sinclair Broadcast in the U.S.—agreed that now is the right time for broadcast broadband convergence to be launched in India.

“India should pioneer and pilot it because we have the biggest need, being the number one data consumer in mobile communication in the world,” said Parag Naik, CEO of Saankhya Labs. Prasar Bharati CEO Shashi Shekhar Vempati spoke on the importance of Direct to Mobile broadcasting for a country like India from the perspective of strategic and national interest. 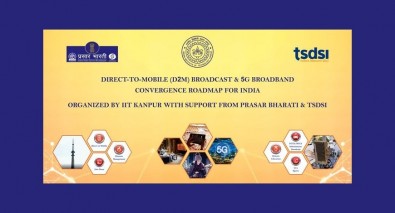 The D2M white paper describes new technologies that are based on the Internet Protocol to enable convergence of broadcast and unicast infrastructure for cost-effective delivery of content.]

The white paper released at the Conclave envisions realizing “Direct to Mobile Broadcasting” capabilities in India by convergence of Direct to Mobile and 5G Broadband and makes recommendations for various stakeholders. It describes new technologies that are based on the Internet Protocol (IP) to enable convergence of broadcast and unicast infrastructure for cost effective delivery of content.

“The converged network is a game changer as it enables broadcast to smartphones, televisions and set-top boxes with a unified broadcast infrastructure,” the paper states.

The comprehensive report goes on to state:

“Multiple technical and policy studies have reached the same conclusion that DTT should be aligned with the cellular architecture. Traditional linear broadcasting architectures use a high-power TV tower that emits about 60KW of power. This architecture assumes a roof-top 5-10 ft Yagi antenna for uniform coverage. For mobile devices, this architecture suffers from spotty coverage and lower throughputs.

“More recent studies have concluded that a hybrid transmission network with a combination of High Power High Tower and Low Power Low Tower with accurate RF planning is very well suited for a Public Broadcaster for improved outdoor as well as indoor coverage.

“Dense single frequency networking (SFN) is one of key innovations brought about by the NGB. Compared to HPHT, dense SFN architecture uses much lower power transmitters and provides excellent indoor signal coverage (50-100W transmitters can provide signal-to-noise ratio >15 dB). Content & advertising can be distributed over a cluster of broadcast cells or localized to a single cell. It is to be noted that mobile and fixed TV viewing can be simultaneously supported by such a hybrid network.”

Across the World ATSC 3.0, now referred to as NextGen TV, is a suite of standards developed by ATSC members that marries broadband and broadcast, ushering in the next-generation television era, which will offer better pictures and sound, interactive capabilities, advanced emergency information, and more. A combined OTS-5G network can be highly scalable to potentially reach the remotest locations and maximize cost efficiencies with better resource utilization and spectrum management.

Those attending the Indian conclave also discussed the need to revisit the licensing framework and governance structure of the broadband, broadcasting and IT sectors in India. Going forward, the IIT said that a larger pilot may be commissioned in Delhi with the participation of multiple stakeholders using Public Broadcasting’s existing High Power High Tower infrastructure and deployed in conjunction with Low Tower Broadcast Radio Heads.