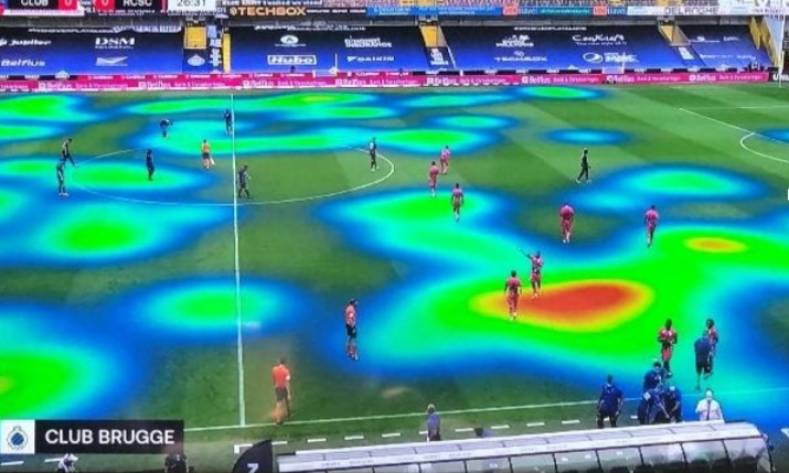 Today’s sports graphics include a range of statistics and analysis, like activity heatmaps (pictured), team line ups and many other things.

Once relegated to lower-thirds and corner score bugs, today’s sports graphics are now used for a lot more than just reporting the score, they are helping tell the story of the game in highly creative ways. In fact, many sports outlets, in an effort to distinguish themselves from the pack, are taking their cues from online video gaming, augmented reality and Hollywood-style volumetric video capture (VVC) to create graphic looks that draw the viewer into the program or game coverage, making it a more immersive experience that builds viewer loyalty and keeps them coming back.

For this year’s F1 racing season, Sky Sports rolled out a new graphics package as an intro for its coverage of race coverage that combines X-ray-style 3D elements and photo-realistic imagery to emphasize how the intricate components of cars align with the physical traits of drivers to deliver the excitement of a race. The network’s world feed includes dynamic graphics showing the new graphic intro plus timer, race stats and other information viewers respond to most. 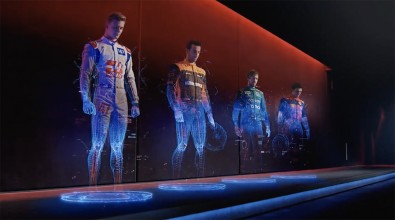 In addition, F1 drivers are shown with the outline and contours of their bodies formed with polygonal lattices and the underlying skeletal structures in red before transforming, from head to toe, into a full 3D photo rendition.

Besides on-air graphics, sports studios now regularly use AR, VR, touchscreens and LED video walls to support their live coverage. This can include virtual and guests as well as interactive touch-screen tables for presenters to enhance game coverage. In-venue graphics systems now allow users to insert virtual advertisements as AR graphics (e.g. over the crowd in the stadium) or completely unobtrusive beneath the player on the field. Networks and sports channels can easily scale up the number of output feeds to provide different graphics and sponsors for different regions. 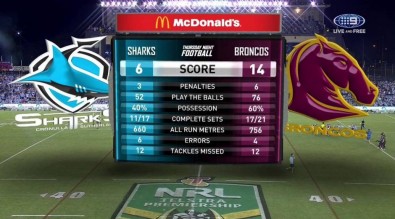 AR graphics driven by real-time data are telling the story, on the field, in highly creative ways.

The graphics displayed a range of statistics and analysis and also included activity heat maps, penalty and free-kick maps, team line ups and event localization. Each of the graphics was available to the match director for real-time insertion during a live feed or for the creation of clips for pre and post-game analysis. Such collaboration with a data provider for major sports leagues and tournaments is a key element for any sports broadcaster wishing to benefit from the next level of analytics in its live or pre/post-production. The process can be highly automated by calibrating the tracking data, many cases in real time.

AR graphics on the field during live play or for in-studio work have literally become the go-to in state-of-the-art graphics, allowing on-air presenters to interact with a game clip and explain the strategy in detail for viewers. While some systems use special sensors mounted on a camera to process the data in real time, other systems use real-time image processing technology (like Zero Density's Unreal Engine) to superimpose AR graphics over the game field without any sensor required on the camera.

As one example, graphic provider Vizrt has partnered with spidercam to provide its Viz Virtual Studio virtual set and AR system with immediate tracking data generated by the spidercam system during live television broadcasts. The spidercam operates with four motorized winches positioned at each corner at the base of the field of play, each of which controls a Kevlar cable connected to a gyro-stabilized camera rig. By controlling the winding and unwinding of the cables, the system allows the dolly to reach any position in the three-dimensional space. 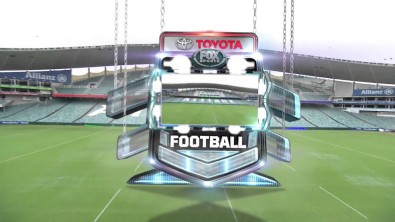 By controlling the winding and unwinding of cables on the field, a spidercam-equipped camera can reach any position in three-dimensional space and virtually insert game stats as well as sponsorship logos.

The inputs of the spidercam operator are processed by software, which forwards the commands to the winches via fiber-optic cables. Two of the Kevlar cables also have fiber-optic cables woven into them to carry commands to the camera and the remote head, and bring the camera's signal back to the control station. The remote head, which houses the camera, provides pan and tilt movement and includes the lens remote, which controls focus, zoom and iris settings. A gyro sensor in the dolly stabilizes the horizon.

The spidercam system also includes a special tracking system, called “spidercam Vector,” that collects the position and orientation of the camera. This data together with zoom and focus information from the camera is transmitted to Viz Virtual Studio, where it is used to synchronize with a virtual camera inside of a Viz Engine real-time 3D rendering platform. This enables immersive, virtual 3D graphics to be seamlessly integrated into the camera feed and ultimately the live broadcast, in real time.

With such systems sports networks are adding analytical features like distance to the goal and real distance of the defender wall for free-kicks; animated 2D and 3D logos; on-field scores; virtual giant screens; and complex scenes that include a large set of animated 3D and 2D elements (used for virtual ad placement). With this technology users are able to include statistical data in real time into the live broadcast or studio show. 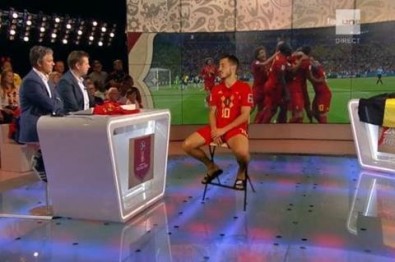 Soccer player Eden Hazard was interviewed live ‘in studio’ in Belgium while actually sitting in front of a green screen in Russia, some 3,500 miles away. The 3D holographic image was produced via chroma key.

Another stunning example of AR graphics come to life is the use of “virtual guests”, whereby a player is shot against a green screen at the arena and a fully rendered image of the player (e.g., a hologram) is “teleported” to a studio and interacts and talks to the presenter via a remote connection. In the case of soccer player Eden Hazard, he was interviewed live ‘in studio’ in Belgium while actually sitting in front of a green screen in Russia.

The Metaverse And VVC

In the area of virtual avatars that will live in the emerging Metaverse, several professional teams are developing 3D multi-camera virtual reality game services for fans that provide a fully immersive viewing experience when wearing a VR headset. The Brooklyn Nets NBA team plans to deploy 100 high-resolution cameras throughout the Barclays Center (where the team plays its home games) that feed into a “three point video system” to create lifelike 3-D renderings of gameplay. The team is the first pro sports team in the U.S. to implement such technology.

What’s clear is that graphics set the tone for a TV broadcast and sports channels are telling better stories and keeping fans better informed with the help of the latest image processing and television graphics systems. In an effort to attract new and existing audiences, the industry continues to develop new visually-appealing graphic content and data-driven solutions for the production of engaging live programming.

If a picture tells a thousand words, today’s sports graphics are helping to tell the entire story in lifelike 3D. 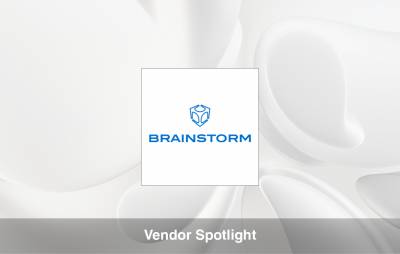