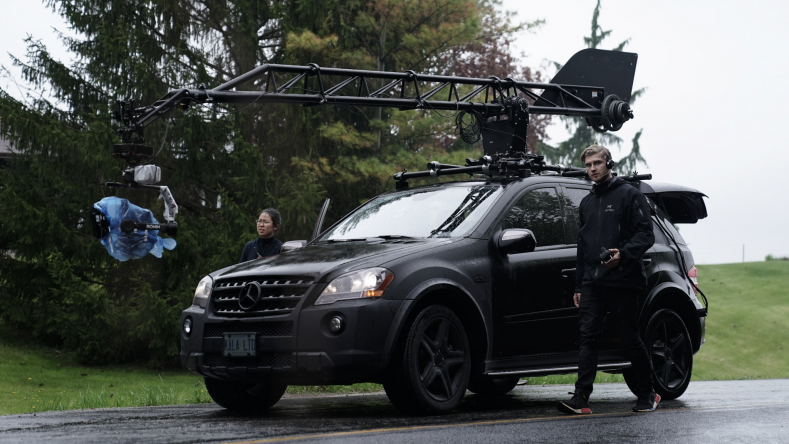 Innovative cinematic production and dynamic camera movement company KALA, has relied on Dejero connectivity solutions to build and operate a ground-breaking production vehicle that handles multiple functions while shooting dynamic content on film, TV and commercial sets. The streamlined workflow is helping save time and cut costs by delivering the same capabilities that would typically require coordination between three or more moving vehicles and a base camp.

KALA worked with integrated connectivity expert First Mile Technologies to install Dejero solutions into its cutting-edge production vehicle, which has been deployed for the production of multiple car commercials. Many of them were shot in locations with network connectivity challenges, such as mountainsides, frozen lakes and remote villages. The KALA vehicle uses Dejero EnGo mobile transmitters that combine multiple cellular and/or satellite networks to achieve reliable connectivity for real-time remote collaboration. The live feeds are transmitted to geographically distributed creative teams from wireless remote controlled cameras positioned on cranes and arms in moving vehicles and other set locations.

The camera feeds are transported in real-time to a Dejero WayPoint receiver, a cloud server or via First Mile Web RTC platform. The live video stream can then be viewed in a simple browser or through secure video screening applications by creative teams in various locations in different parts of the world, or from a central base camp. Directors, editors and agency personnel can collaborate and provide instantaneous feedback and direction to the remote production crew on set. The feeds are also displayed simultaneously on five monitors within the vehicle for the production crew on location.

Producing fast-paced car commercials or stunt scenes in locations where there is limited network connectivity usually involves a camera vehicle carrying a camera crane, the picture vehicle and a chase vehicle. The chase vehicle, carrying the directors, producers, or agency, would ordinarily need to follow the camera vehicle closely enough to receive a line of sight/short range video transmission to enable creative decision making.

In a conventional set-up, reshoots are commonplace, in particular when there is a limited window of time; for instance when a city has closed a bridge for two hours to allow location filming, or if physical weather effects are being added to a scene, such as rain, haze or snow. If the shots don’t work and the creatives only see footage after the initial shoot, it can be difficult and costly to recreate the scene for a second day of filming. The Dejero connectivity workflow enables instantaneous feedback and fast creative decision-making so the production crew on the ground can gather more shots first time, helping avoid potential reshoots.