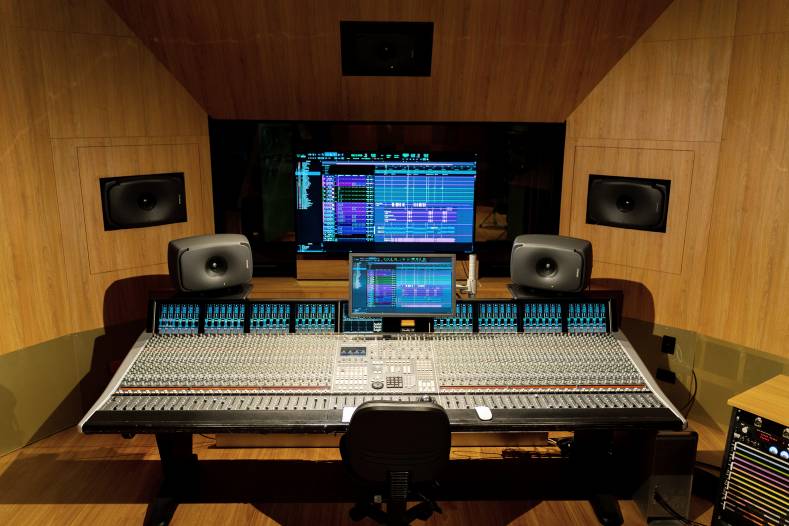 Studio A at JMC Academy.

The recent renovation of JMC Academy’s Sydney campus has seen two of its studios equipped with Genelec Smart Active Monitoring solutions, giving students the experience of working with high-end professional equipment while also providing the longevity required by educational institutions.

The renovation required the multifunction Studio A and the adjacent Studio C to have both surround and stereo monitoring configurations. Acoustic engineer Glenn Leembruggen of Acoustic Directions specified Genelec’s ‘The Ones’ series for the studio redesign and, with the help of Genelec’s Australian distributor Studio Connections, was able to deliver a quality design solution.

Having previously relied on a pair of 20-year-old 1034As in Studio A, JMC was aware of Genelec’s longevity. Centring around a 48 channel SSL Duality Console, the design team opted for 8361A monitors to be soffit-mounted into the wall in the LCR positions, with a pair of 8351Bs straddling the console bridge as stereo nearfields. Supporting these are 8340As for the rears and a 7360A for the sub, resulting in a fully independent 5.1 surround system. “For students to work on post-production video mixes or record a full band, Genelec monitors offer an amazing sonic performance,” says Paul Newcomb, Business Development Manager at Studio Connections.

Studio C was ultimately fitted out with a pair of Genelec 8351Bs, also seamlessly soffit-mounted into the wall and reproducing every subtle nuance of the music being heard in incredible detail. “The music seemed to float mid-air like a transparent three-dimensional puzzle,” adds Newcomb. “Robust and durable, they were able to perform at their breath-taking best and sounded fantastic.”

Due to the diversity of mixes and applications in each studio, the design team calibrated the entire installation with Genelec’s GLM loudspeaker management software, fully optimising every monitor for the room and allowing users to switch between monitors and maintain precise control of listening levels in each studio. “GLM always plays a major role in the sound of the monitors,” Newcomb explains. “Each space is different, and being able to automatically calibrate the monitor to sound neutral within any given room is a real benefit. The flexibility to set up and store groups, settings and listening positions is extraordinary – Genelec is definitely in a class of its own with this technology.”

The final result has impressed the team at JMC as they’re now able to offer a space that audio engineers and producers are happy to work in. The studios boast an inspiring, world-class atmosphere, allowing students to access real-world experiences of audio engineering and production during their training.

“For students, facilities like JMC Academy are often the first time they get to experience a professional recording environment,” Newcomb concludes. “JMC have provided them with a great opportunity to learn their craft using monitors which tell the truth, sonically. We’re confident that their experience will be a positive one and that working with Genelec will become a partnership that they can trust in for many years to come.”