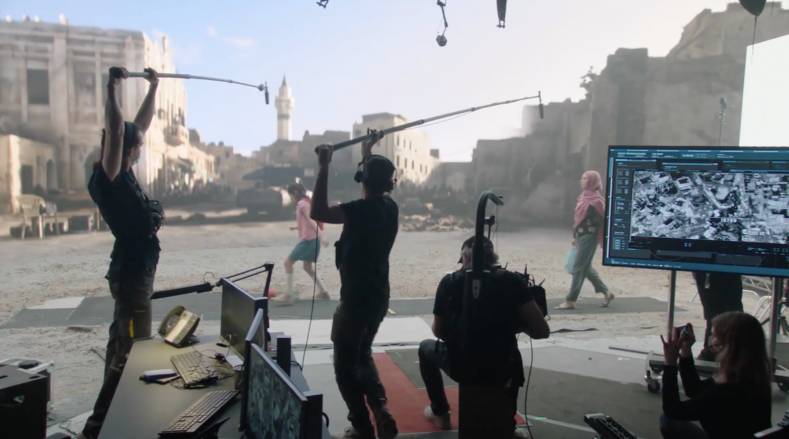 Virtual production capabilities are advancing at pace and will also start to become integrated into regular production schedules to reduce production times and costs. What’s more VP is being seen as a way to get productions that have been stifled under Covid restrictions to move quickly into production while physical sound stage capacity is maxxed out. However, questions still linger for content producers; principally around the higher capital cost of VP for early adopters and the urgent need to train and educate the industry in how to work with the technology.

Some of these issues are outlined in a new Global Film & Video Production Survey compiled by consultancy Altman Solon. It states, “Studios have ramped up efforts to purchase real estate and build new soundstages to keep up with demand. While traditional production centres are still critical to meeting future needs, the backlog – along with the content production explosion – has pushed virtual production capabilities to the fore.”

The demand for content is accelerating with global content spend forecast to increase to $330bn by 2027, growing at a CAGR of 7% from 2022.

“On top of the billions more in new content from streamers, movie studios, and cable and broadcast networks, the industry cannot accommodate nor sustain the level of demand for production facilities,” the consultants find. “Existing backlog coupled with an increased appetite for original content is putting the spotlight on improving operational efficiency through the adoption of new technologies and innovative solutions.”

Virtual Productions allow filmmakers to reduce production length through real-time editing and decrease the logistical challenges of needing full production crews on set. In Altman Solon’s survey 42% of companies with over $100 million in revenue are anticipating using VP tools in the next 18-24 months.

The global virtual production market is expected to grow at a CAGR of 16.7% from 2021 until it reaches $4.7 billion in 2028, the report states, while another analyst, Research and Markets expects virtual production to be worth U$5.4bn by 2026 up from U$ 2.4bn last year.

“The focus of content-hungry streaming services on prioritizing shorter production cycles may accelerate adoption and efficiency by exposing more industry professionals to these tools,” suggests Altman Solon. “As studios and creators weigh their comfort level with new technologies, virtual production will drive higher capital costs for early adopters. For later stage adopters, education and business case development will be a priority given the rapid changes to technology and processes.” 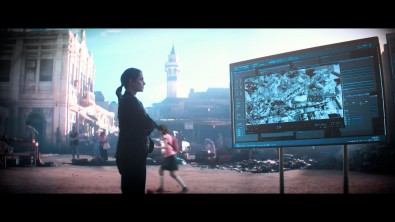 Short film Fireworks, directed by Paul Franklin, was shot at Dimension Studios. The film tells the tense final moments of an MI6 operation to take out a target in Tripoli. Production designer Jamie Lapsley researched the city online and built an accurate version of the location in Unreal Engine,

The Practical Benefits Of Virtual

Even before Covid, VP was heading into the mainstream. That’s because the predictability of the virtual environment drives cost-savings from the bottom line.

“All the variables of shooting on location such as weather conditions or where craft services will actually be can be controlled,” says AJ Sciutto, Director of Virtual Production at VP outfit Magnopus.

“Simply not unloading and repacking kit each day saves time,” says Max Pavlov, CEO & Co-founder, LEDunit, a VP stage in Riga, Latvia. “You can shoot at golden hour all day long if you want. There’s no need to stop and wait for perfect light or fret about paying overtime.”

Location based reshoots, which can account for 20 percent (or more) of the final production cost of high budget films, calculates Deloitte, can be eliminated with careful pre-planning.

VFX costs on a high-budget sci-fi or fantasy film can be as high as 20 percent of the total film budget but shooting against an LED wall significantly reduces overheads for compositing and rotoscoping.

Virtual production opens up opportunities to shoot in areas which are difficult to travel to or simply downtown in a city where permits would be cost prohibitive. Smaller VFX teams can use photogrammetry and Lidar scans to rebuild those locations in a studio.

Scenes of conversations in moving cars, walk and talks, “things you would spend a lot of money to shoot on location can be shot virtually at the same quality,” says Sciutto.

Another advantage is the benefit it gives to actors able to key their performance to locations they can see rather than to invisible creatures or environments requiring greater leaps of the imagination.

“The ability for actors to play within true to reality environments is the real focus of virtual production,” Philipp Klausing, MD at Dark Ways which just produced Netflix period drama 1899 at a virtual stage in Berlin. “We are recording performances not the background.”

VP Is Not A Silver Bullet

But for all its advantages VP does not make creative or commercial sense for every production.

“VP is not a silver bullet,” says Sciutto. “There are a lot of people who are trying to force things into a VP workflow. There is absolutely a tactility to locations you don’t get inside of a volume.”

Photographing LED screens in close up can result in problematic visual artefacts which is why shots in a volume tend to have their backgrounds blurred with a shallow depth of field.

Shooting in a volume is not all or nothing either. Stages composed of modular and portable LED panels can be built to spec. “A scene set on board a train for example might only need enough panels to cover the windows to give your interior’s realistic reflections,” says Chris Hunt, CFO at LED specialist Brompton Technology.

The Mandalorian and 1899 made use of regular sound stages alongside a volume. This can be to accelerate schedules (shooting different scenes simultaneously) or for aesthetic reasons. “Shooting an entire show in a volume can look too sterile” says Sciutto.

Physical builds and props on the volume stage need to merge convincingly with the CG backdrop, putting additional pressure on production design.

“The whole LED image in camera should transition seamlessly between floor, ceiling and wall of the Volume,” he says. “Most LEDs are at 90-degree angles to the stage and require some painted clean up in post. Placing physical sets, such as columns, that repeat seamlessly into the wall works really well because the camera and your eye can fix on content that is lit in the real world.”

Nor are volume stages necessarily cheap. Depending on the project scope it can require additional labor to create VFX. The biggest cost are LED panels, originally built for DOOH and currently expensive rental items.

“Everything is bespoke and there’s no assembly line methodology for putting together a volume stage,” Sciutto says.

For all the incredible photoreal quality of games engines like Unreal, the software is not capable yet of rendering some computer graphics in the highest quality. Elements like human background characters, rainforest foliage and waterfall simulations are picked out as troublesome.

“There are many interlocking parts to VP which can create cascading problems if one element is misjudged or overlooked,” says Erik Weaver, Director of Virtual & Adaptive Production at the Entertainment Technology Centre in LA. “For example, the idea that the LED screens themselves can illuminate the actors and set is broadly true but masks a maze of complications and decisions that the cinematographer and gaffer have to master.”

Technology aside, the biggest impact of virtual production is the shake-up it means to conventional filming. New production roles and lines of decision making need to be agreed and understood.

The Virtual Art Department (VAD) for instance, led by the VAD Supervisor will include leads for creating lighting and assets within the virtual world. Their work needs to interface with a gaffer and the production designer (who works across both real and virtual sets). The ultimate responsibility for the image composition rests with the DP and director.

Various bodies are working to agree job descriptions and pay rates. A new lexicon for creating in Virtual Production is being developed by organizations including Netflix, SMPTE, disguise and VES.

Disguise has announced disguise Assembly, described as a global alliance between industry and academia endorsed by Epic Games. It is a training and knowledge exchange in which disguise will help institutions teach xR methodology as part of their curriculum.

“Building a bridge between industry and academia is essential,” affirms Sara Coppola-Nicholson, Head of Research Programme, disguise. “Fostering students and being at their side whilst they build their careers really matters to us. But there’s also a mutual benefit: we need to understand the new generations of creatives and technical experts and where they will take technology tomorrow, as this will help us develop better workflows for the future.”

SMPTE aims to create a library of digital assets for producers to quickly license and download. That’s becoming increasingly urgent in order to slash the time in pre-production needed to build virtual worlds, particularly for producers needing to convince investors to finance the production.

“Just as when the industry went from shooting film to digital, some directors and DoPs need convincing [about VP],” says Pavlov. “But when they try it, they understand how easy it is.”