NBC Olympics is promising “every minute of every event” on its OTT streaming platform.

This year’s Winter Olympics Games, coming a mere six months after the 2021 Summer Games, is set to begin Feb. 4-20 amidst a persistent pandemic that will once again limit how the television production teams can interact on-site in Beijing, China, and do their jobs. This year’s Paralympics, also based in Beijing, are scheduled for March 4 to 13.

Taking lessons learned from the 2021 Summer Games, organizers are creating what they’re calling a “closed loop system - also known as a bubble - in which thousands of athletes, technical staff and journalists will be confined for the duration of the Games. Only a limited capacity of spectators - one from outside mainland China - will be allowed into the various venues, and be restricted to clapping but no shouting or cheering.

Much of the U.S. coverage of a record 109 events - including seven new events, like women’s “MonoBob” and mixed team ski jumping - will be presented live to tape, as Beijing is 13 hours ahead of the Eastern time zone. However, much of it - more than 2,800 hours of programming, a Winter Olympics record - will be streamed live on NBC digital platforms like NBCOlympics.com and its Peacock+ OTT service (which will present “Every Minute of Every Live Event”).

The Olympic Broadcasting Services (OBS) will once again play host for a myriad of international rights-holder broadcasters (NBC will broadcast the Games in the U.S.), overseeing the design and construction of the on-site International Broadcast Center, located in the newly built pavilion of the China National Convention Centre on Beijing's Olympic Green. The 419,000 square-foot facility is located this year with the Main Media Centre in Beijing, where more than 220,000 square feet is dedicated to broadcast studios and production. Another 129,000 square-foot broadcast center is strategically located in the nearby mountains to cover many alpine events. 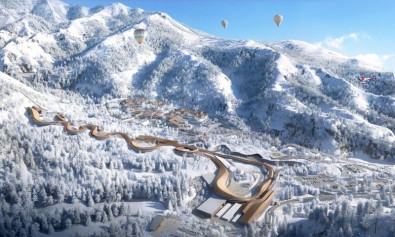 A separate 129,000 square-foot broadcast center located in the nearby mountains will help cover many alpine events.

As part of an innovative layout and for the first time in an Olympic Winter Games, a total of six Centralized Technical Areas (CTAs) will be strategically placed within the facility to provide data center services and infrastructure to both OBS and broadcasters. These areas will enable broadcasters to keep their technical equipment that receives or sends signals from/to OBS, while saving energy by reducing the heat, ventilation and air conditioning, and technical power consumption.

The OBS has promised that over 6,000 hours of content will be captured from these Games, with a major focus on digital delivery and OTT platforms. IP delivery will allow broadcasters to easily convert content to the variety of formats that must be generated to support a wide-ranging viewing audience.

The IBC is in close proximity to the National Stadium, National Aquatics Centre (the “Ice Cube”) and the National Indoor Stadium, three legacy venues from the 2008 Olympic Games that will host the Ceremonies and ice sports competitions during the 2022 Games. Strict safety measures - daily testing, mask wearing, plexiglass dividers and a lot less staff - will all be part of the event. Everybody at the Olympics will be required to be vaccinated.

To help define safety protocols, the Beijing 2022 committee and the IOC has developed and distributed a “Beijing 2022 Playbook.” It outlines COVID-19 countermeasures based on extensive work carried out in collaboration with scientific experts and organizations from across the world. All Games participants - athletes and technical staff - must follow the Playbook and understand the plans, the steps they must take and the rules they must follow.

As with the most recent summer games, remote control operations and cloud processing will play a big part of these games. The ST 2110 IP standard will be used by all broadcasters in order to move content between venues as well as for sending content back to their home countries. Thanks to a new familiarity with remote production workflows, many more technicians and equipment operators will be working remotely than ever before. This new way of working has facilitated the design and build of a virtual infrastructure that will marry on-premise systems with cloud processing and connectivity. Many of the systems were pore-tested months ago and sent over to China as pre-tested racks of equipment. 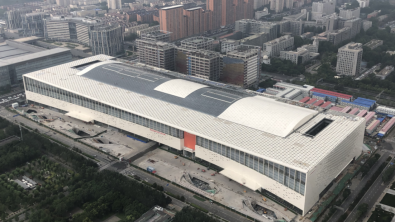 The IBC in Beijing features six Centralized Technical Areas to provide data center services and infrastructure to both OBS and broadcasters.

This year the OBS is working with the Alibaba Group to create the “OBS Cloud,” a suite of custom-made cloud-based solutions specifically adapted to the extremely demanding, data-heavy broadcast workflows. This cloud service offers high-performance connectivity, processing and storage capabilities. Not only can rights-holding broadcasters access all OBS content remotely, but they are also now able to set up their own content creation, management and distribution systems using the platform.

The 2022 Winter Games will mark the first 4K UHD/HDR coverage of the winter event. The OBS has developed an infrastructure that allows users to synchronize content whether it’s in 1080i HD or 4K UHD. Many broadcasters will be capturing the various events in either HD or UHD or both using the same unified platform. Some outdoor video monitors will display 8K video as well.

The latest 5G wireless technology will also be deployed, due to China’s spotty coverage, where frequencies will be hard to access. China Central TV (CCTV) - supported by China Mobile, China Telecom, China Unicom, and China Radio and Television - will broadcast 8K UHD content live over a 5G network.

In addition mobile devices will be able to access the Winter Olympics in 8K UHD. The Information Network Management Center of Beijing Radio and Television Station has developed a 5G mobile application called “8K APP” that will be synchronized with CCTV’s 8K channel, so users can watch the live broadcasts. Video can be zoomed in during playback.

As has been the case for the past several decades, Panasonic will serve as the official provider to the Games, providing not just a multitude of cameras, but also switchers, servers, monitors and other necessary production equipment. But many other vendors have also supplied technology and systems to keep the OBS operation running smoothly.