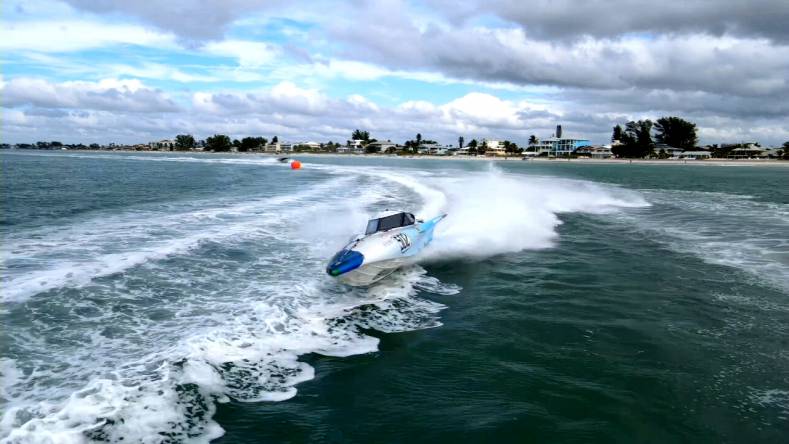 Planning for any kind of live TV broadcasting starts with a ‘what-if?’ list. What if the power source fails? What if a key production person gets sick or hurt? What if broadband internet access becomes unstable? What are the chances for each ‘what-if?’ and what back-up alternatives fit the budget? The list should be as lengthy as it is easy to edit.

Budgets help what-if lists edit themselves, but engineers aren’t always in the production budget loop. Never assume or rule out anything. Point out probabilities, risks and remedies to the director and executive producer and encourage them to make suggestions and approve the plans in the comfort of their office well before the event. Then you can all go to lunch knowing everyone is on the same page. The worst place ever to make new plans is in a temporary control room during the heat of a troubled live production.

I’ve engineered and directed live TV coverage of powerboat races with the same broadcast team for 14 years. Every broadcast takes four days to set up and is then on the air for two days. Each show develops a unique set of technical issues to invisibly overcome while on the air. Then we tear it all down and pack it in a van in about three hours. My goal has always been to be so confident on the Friday before the race I can spend it relaxing by the water and take in some pre-race day powerboat action. It never happened until last month’s World Championship Offshore Powerboat race in Englewood FL. 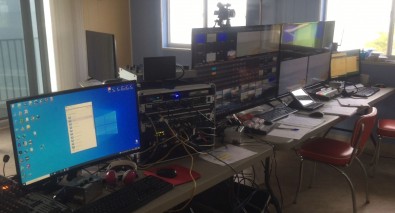 All our studio gear sits on folding tables. The network gear, decoders and the router are mounted in a portable 2-foot rack.

Wear, Tear And Traps
Our production gear is six years old. Travel, packing, unpacking, wiring, and unwiring can take a toll on video production gear, connectors, cables and reused cardboard boxes. Before the equipment was packed for the race, I spent two weeks checking each device and cable, and doing every settings experiment I could think of to test and tweak our pictures and content flow before we arrived on site.

The prep time was well-spent, and the show’s executive producer and I were finally able to take that long-elusive Friday afternoon off. About an hour after we finished relaxing on the beach, the race organizer called and moved up the official race start time the next morning by an hour, abruptly disrupting the dream of being fully prepared. The executive producer later commented the relaxed afternoon helped keep him from blowing his cool during the new race time phone call.

We built the roll-around unit on the left with a 5 GHz Wi-Fi microwave, IP encoder and a car battery to power it all day for interviews in the pits.

The N+1 Rule
I’ve never used my automobile’s spare tire, but always feel safer having it on-board. The same can be said for spare video gear at remote productions. The N+1 rule applies to all TV engineering equipment planning. N+1 states that a time will come when you need one more than the number you thought you needed. It could be the number of lights, cameras, router connections, long HDMI cables or AA batteries. You’ll sleep much better knowing you’ve got your own back with on-hand spares.

We always bring three scan converters to resolve format issues. We thought we needed one, bought two, and I bought a spare for myself. We typically end up using all three on-location to integrate new sources such as internet weather radar, VLC, drones, and camera operator’s personal cameras into our 720p60, HDMI production format. It’s quicker and easier to convert outside signals than to dig through unfamiliar menus in search of the right settings.

In addition to knowing the inventory of items and spares the production provides, many experienced remote broadcast engineers carry their own bag of remote emergency solutions. The bag usually includes a variety of video and audio connector adaptors, spare new batteries, a grounded 3-wire to 2-wire AC adaptor (aka suicide plug), a Volt-Ohm meter, a spare USB charger with Apple and Android cables, a box of band-aids and of course a spare roll of Gaffer’s tape. The more remote production experience an engineer accumulates, the more valuable solutions accumulate in the engineer’s personal emergency solutions bag.

Things can happen that Gaffer’s tape won’t fix. For example, the two-way radio base station we always use for PL crew communications wouldn’t work when set up. After a couple of hours of troubleshooting and taking the base station apart, we found a wire from the radio circuit board soldered to the antenna connector on the radio chassis had literally fallen off the connector. That show-threatening challenge took valuable time to troubleshoot, re-solder and put back together. Fortunately, we brought tools, a soldering iron and solder. A stray soldered wire was about the last thing anyone expected to be an issue. 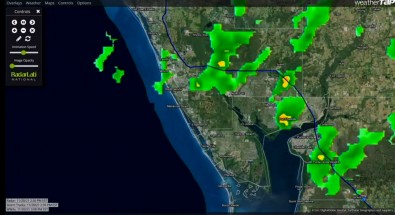 Pop-up storms added excitement to the production and show. Boats are made to get wet. Production gear is not.

Ready For Nature
You can’t depend on less experienced camera operators to think of protection from sun, insects, and rain until they need it. The production should provide bottled water, sunscreen, hats, bug spray, and a tarp and large plastic trash bags for rain protection for every outdoor camera position. Engineers must ensure it is all available and verify that all camera operators get what they need before traveling to their camera locations for the day.

Why is nearly all portable video gear painted black or dark gray? A black case gets hot in the sunlight, and it heats the electronics inside. Keeping electronic gear in the shade will improve its chances of survival outdoors. If natural shade isn’t available, breathable white material, such as a plain white t-shirt can shade dark gear from strong sunlight. Verify the improvised shade doesn’t block equipment ventilation. The biggest risk to our production gear in the sun is overheating. 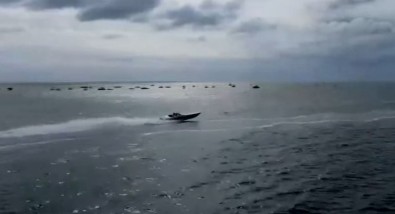 Clouds softened the harsh backlighting glare on the water. A polarizing filter helped make it disappear.

Lens Filters
Part of the fun of directing an afternoon powerboat race on the Florida west coast is the strong sun reflecting off the ocean that gets brighter as the sun moves toward the horizon. We’ve tried several filters from blue and neutral gray gradients which didn’t look good for us, to polarizing lens filters which are very effective when properly tuned. We learned to tune polarizing filters by rotating the filter to minimize the glare as the camera output is displayed on a waveform monitor. Fine-tuning lens polarization with a waveform monitor is much more accurate and scientific than tuning by video display observation.

The bright sun and reflections also pushed our built-in camera ND filters beyond their capability. We found that the built-in camera shutter can assist the ND filter and it also makes for clearer freeze frames and slo-mo video during high-speed action replays. 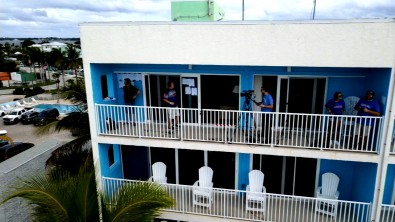 The drone operator in the shadow on the right fed this selfie while approaching the studio balcony for landing.

Drones
We’ve tried to integrate several drones and their operators in our powerboat racing productions before with generally disappointing results. Some didn’t have sufficient RF range. Others didn’t have enough battery life. Nearly all owners worried about their drones falling into the water and disappearing.

At the recent world championship, we met a drone owner/operator whose father is on the board of the race organizer. The drone owner had chased race boats with his drone all summer for fun, and he provided the best live drone powerboat racing video via HDMI we’ve ever seen. He also had the courage to fly further out on the racecourse than anyone. His drone pictures gave the race coverage a perspective and magic sparkle unseen by our TV audience before.

Powerboat race events are insured, and the insurance contract insists that a rescue helicopter be in the air over the racecourse during every race. Our drone operator coordinated with the helicopter pilot ahead of time to agree on altitudes and fly zones. That plan kept the helicopter safe, but a bird collided with the drone during the race, and the bird lost.

A few years ago, the powerboat race organizer got a phone call from the event insurer in New York who was watching our live stream race coverage on the internet. He demanded the race stop immediately or the insurance would be cancelled because he couldn’t see the rescue helicopter. The race was immediately stopped because the helicopter had landed at a nearby airport to refuel. Once the insurer saw the helicopter in position again on our stream, he gave the organizer permission to continue insured racing.

Moral to the story: You never know who’s watching.