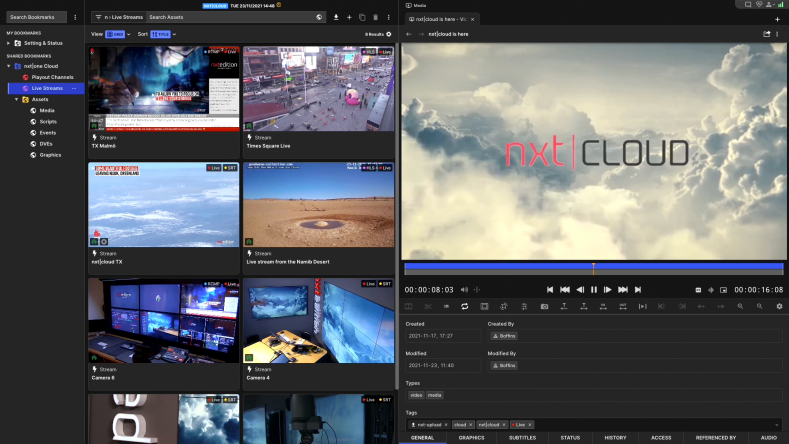 Broadcast microservice specialist nxtedition has further enhanced the consolidated production and playout platform with nxt|cloud, a complete deployment of nxtedition which runs in the public cloud.

The architecture of nxtedition is claimed to be unique in being entirely built in JavaScript, ensuring the platform is positioned to take advantage of developments in web technology. The developers of nxtedition had previously been deeply involved with CasparCG, the open-source broadcast graphics platform now widely used around the world.

“With nxt|cloud we can offer an identical experience in the cloud: the same quality, the same functionality, the same user experience, the same responsiveness,” said Adam Leah, creative director at nxtedition. “That includes sophisticated added-value features like localisation: we can, for example, take in a single live sports feed over SRT and split into, say, eight identical CasparCG channels, but sending each channel a separate commentary audio and graphics feed in different languages - all driven by the timestamped metadata authoring and the layering in nxtedition.

He added, “Private cloud on premise is the pragmatic choice for most broadcasters when it comes to production. But while that gives them control over their content, it also gives them a concern over disaster recovery. A widespread power failure, for example, could take them off air.”

“We designed nxt|cloud to also provide new and existing on-prem clients with a hybrid cloud solution for disaster recovery. By using seamless replication, not only are the playout channels mirrored from the ground, but the scripts and media are mirrored too. If the client has an emergency, then the entire team switches to the cloud and carries on where they left off. The UI is the same, everything is the same – from ground to sky.”