While the merits of 8K delivery is being debated by broadcasters around the world, some are moving forward with plans to deploy the high resolution quality in creative ways that engage viewers and encourage them to interact with a live broadcast.

The latest discussion is around virtual reality (VR) to create immersive viewing experiences, without the bulky VR headsets we’ve all become familiar with. All you need is the app and a mobile phone (Android or iOS).

With the start of this year’s Premier League in England, BT Sport has launched a new application for mobile phones that allows fans to select among several 8K feeds to create a live virtual reality (360 degree video) experience; putting fans at home, or on the go, in the stadium while giving them access to previously inaccessible areas (the locker room, the tunnel and other behind the scenes locations). It’s all about enabling the viewer to personalize their experience while forming a captivating complement to a live linear broadcast.

“One of the important things is to make the programming accessible to the widest audience possible,” said Jamie Hindhaugh, Chief Operating Officer of BT Sport, London, speaking during a podcast entitled “The Future of VR and Sports” It’s part of Intel Corp.’s “Conversation’s In The Cloud” series.

“Sports is a social viewing experience, and as soon as you put a headset on, you are alienating yourself from the people you are watching with. Using mobile phones as our primary interface means that we’ve created a second screen opportunity whereby on your smartphones you can access this brilliant coverage through your mobile phone.” 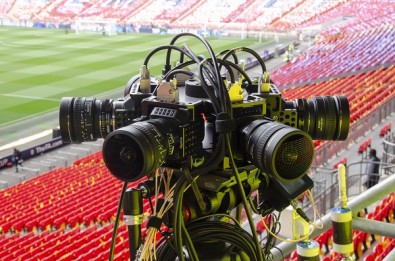 Tiledmedia’s on-field VR camera rigs include up to six 8K cameras capturing a 360-degree experience during a live broadcast.

BT sport has partnered with a Netherlands-based technology company called Tiledmedia and its ClearVR solution, which has made it possible to give BT Sport subscribers a true VR 360-degree video experience without having to use VR headsets or other special equipment. They call it a “Viewport-adaptive” solution that overcomes the challenges of bandwidth, live image quality and a lack of devices that can decode 8K by only streaming part of the video that the user sees.

[Tiledmedia worked with BT Applied Research and BT Sport in a series of 8K tests and trials in 2019, in which BT compared various 8K streaming solutions. BT Sport then distributed, over the public Internet, the world’s first end-to-end VR360 production in 8K VR360 during the FA Cup final in 2019.]

Tiledmedia has come up with a new way to send such high resolution files using open source Scalable Video Technology (SVT, a software-based video coding technology that is optimized for Intel Xeon processors) and HEVC encoding technology (an extension of the H. 264), which Intel has adapted for its tiling use case. It requires lots of cloud compute power and special encoders for this to be decoded in regular hardware decoders that sit in consumer devices.

Rob Koenen, the Founder and Chief Business Officer at Tiledmedia, said that most VR systems stream all the data, despite the fact that the viewer can only see 10-15 percent of the pixels. They stream everything and decode it on a local device. This, he said, means that you are limited in the quality that you can offer.

“The technology that we provide streams only what the user actually sees at the resolution they see it,” he said. “This makes it possible to go back to realistic bit rates, and make it work on the hardware decoders that is already included in all of these smart phone devices.”

They do this by cutting up the image into about 100 tiles and then only streaming those tiles that the user actually sees. All of the processing is done in the Intel cloud, which Koenen calls “an asymmetric system in the sense that it requires quite a bit of compute power to do all of this tiling and encode all of these tiles, but it’s very simple and runs on all typical client devices. So, you put the load in the cloud and let the subscriber stream and access only what they need.”

Tiledmedia also relies on Intel technology to leverage the significant amount of processing cores required—approximately 1,000 cores per camera. And they use four to six cameras in a special rig for each camera position to create the VR experience.

“So, when we stream 360 video we’re working with thousands of cores in the cloud,” said Koenen. “That’s a lot of processing power and it’s all done in the cloud.”

The “Magic Window” app allows subscribers to select what viewing experience they’d like to see, and that now includes 360 video, without having to pay for new platforms, new boxes or new phones. At any point in a live match they can select from multiple 8K feeds and look around by moving their phone. Within the app they can still watch the linear game inside a virtual Jumbotron screen as desired.

The BT Sports app allows viewers to watch the live game or choose from different 8K 360 feeds. They can also pan and zoom the live image with their fingers on the phone.

“This is why we need 8K feeds because if you use 4K and zoom in the pixels get very blurry,” said Tiledmedia’s Koenen. “But with 8K you can really zoom into the action and watch a replay very clearly.”

The concept, according to BT Sport's Hindhaugh, is to bring the viewer closer to the action. The better the picture quality, the more immersive experience you can provide. BT Sports also wants to expand its portfolio of consumer products, having been among the first to broadcast live 4K, HDR, Dolby Atmos, and now a VR experience.

“The other thing that is critical to us is that we want to be more than just a linear broadcaster,” said Hindhaugh. “We want our viewers to engage with our sports programming in a myriad of ways. Sports is all about experiences and especially during the last year where things have been difficult where, as fans, you couldn’t go to the stadium. In October we launched a product called match day experience. This is all built around live premiere league games on BT Sport. It includes being able to watch together (and communicate online) with four other subscribers live and in sync with the live game.”

Other features of the app include a Manager mode, that provides graphic overlays of player stats and other information over the live game that users can choose to watch. This allows users to create their own replays, using that 8K 360 playback.

“Being able to see a great play in 8K 360 from a number of different angles is what we’re about here,” said Hindhaugh. “It’s taking personalization to a whole new level and adding value for the viewer.”

Going forward, Koenen said that the quality of their tiling system will keep increasing and the technology will become more affordable.

“We have a way to go, but I think VR will become a much more regular experience to complement the TV in your living room (which is not going away any time soon),” he said.

Hindhaugh said BT Sport is working on localized sound, which he said makes for a better and truly immersive experience. In addition, object-based broadcasts integrated into an 8K or 16K technology is on the horizon. What that means is that in a live environment you’ll be able to select the experience you want personally. And this will allow users to drill down to select what size score clock you want, what statistics, what friends you want to watch with.

“I do believe that while sport is a social viewing experience, given reliable and flexible tools, we all like to watch in a slightly different way,” said Hindhaugh.” This [VR 360] technology is a massive enabler to be able to deliver the true definition of what personalization is.”