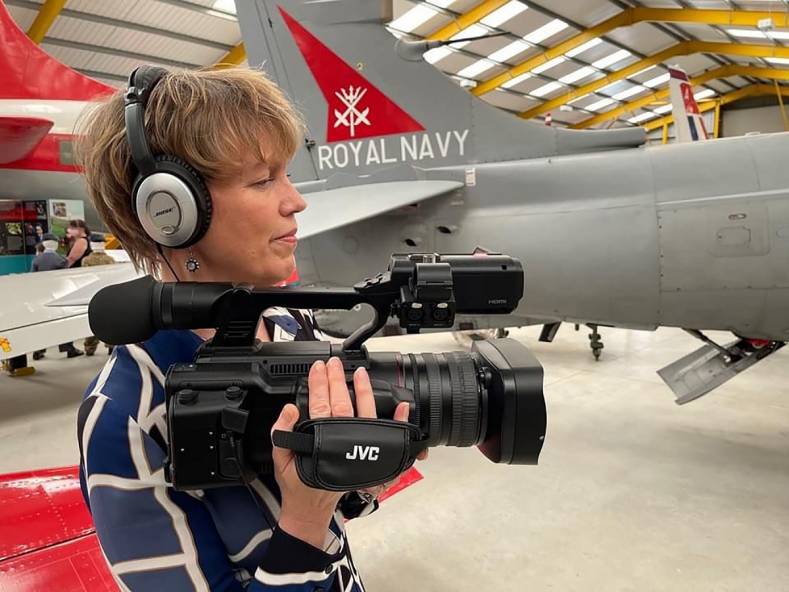 Video journalist Annalisa Russell-Smith chose the GY-HC550 CONNECTED CAM from JVC Professional Video for her latest project - a documentary about the world of aviation and the people who drive it.

Russell-Smith chose the camera not only for the clear, crisp images it captures, but also for its livestream capability for airshows and other events, which enables her to connect with live audiences while simultaneously recording footage for her documentary. “The GY-HC550 appealed to me for my photojournalism work because it gives me the ability to do a live broadcast in such a seamless way,” she explains. “This is a huge benefit if you're trying to engage with an audience and gather a following, or even be able to cover something newsworthy that’s happening in real time. We all need technology that works. JVC has developed this camera for exactly the kind of run-and-gun work that I love to do. You don’t want to worry about the settings and the setup of your camera; you need to be able to just use it straight out of the box, which I can do with the GY-HC550.”

Russell-Smith notes, for a large-scale project such as a documentary, the JVC CONNECTED CAM appealed to her because of its versatility with file formats, frame rates and camera operations. Russell-Smith explains that she hadn’t used a standalone video camera before, but rather a DSLR camera for stills and video, so the upgrade to the GY-HC550 has proven to be a great benefit.

“Having the auto focus function is huge for me because I am able to accomplish things that had not really been possible with a DSLR, like following fast-moving aircraft,” says Russell-Smith. “In the past, I’ve used all kinds of creative ways to make sure that I was in focus, and still ended up missing shots or being disappointed because things were not sharp. The GY-HC550 affords me a lot more creativity without having to worry about that. The auto focus has positively impacted the way that I work because I can use so much more of my footage. Anyone going from a DSLR to a video camera that has auto focus is going to understand and appreciate that shift. I also really like the large format CMOS sensor, because I can still get the shallow depth of field and soft backgrounds that I love, and for which DSLRs are known.”

Outside of her documentary work, Russell-Smith also produces content for a range of clients. The flexibility of the JVC GY-HC550 for still and live streaming has afforded her the opportunity to expand her services.