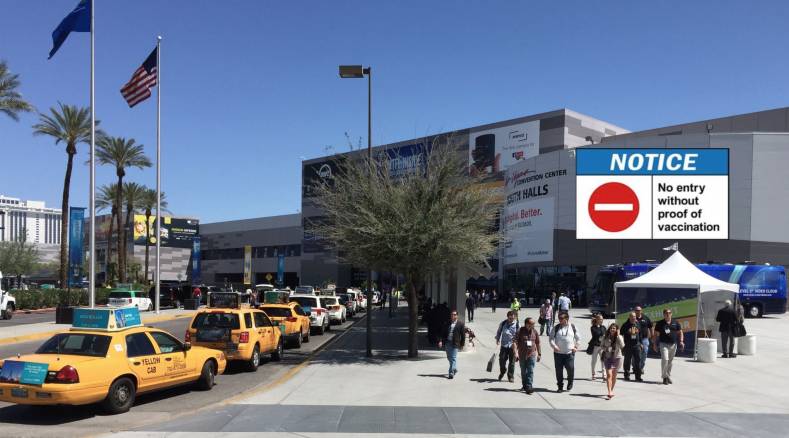 All 2021 NAB Show attendees and participants are required to provide proof of vaccination.

April NAB Shows have always been the annual moment of synchronization between new broadcast technology and the lives of the people who make, sell, buy and/or use it. It also marked an unofficial new fiscal year for most station engineering and capex planning.

The pandemic and the loss of annual industry tradeshows has been disruptive and changed the course of the industry. The remote technology that kept and keeps many stations on the air through the pandemic is nearly all less than a decade old. Many stations became familiar with new remote production and control over IP solutions at previous NAB Shows and began local integration for convenience and flexibility.

Suddenly in early 2020, IP production and control solutions became an industry lifesaver and a significant trend. About the time the 2020 NAB Show was cancelled, the industry was pivoting to remote production ideas born from necessity and generally not seriously considered before the pandemic. Fortunately, the new ways worked, people and viewers liked it, and manufacturers accelerated development of new remote broadcast solutions to meet the new remote production needs and trends.

Unfortunately, the sudden pivot to the internet is indicative of the times but probably not the best news for the NAB Show. Today's remote production, IP control and nearly all solutions other than RF, camera gear and displays can be demonstrated and investigated in depth on the internet. Progress has turned video technology shows into software shows. As the world changes, so do industry needs and NAB Shows.

Way-Back Machine
I’ve written NAB Preview stories for decades and researched this one by checking manufacturer's websites and reviewing some old video magazines I wrote and kept. In 1974, my first broadcast technology story was published in the March BM/E NAB Preview edition. The 1974 NAB Show was 67,000 square feet in Houston TX, with 150 exhibits. Fewer than 10 of those exhibitors are in the broadcast industry today. Most of the others were cut by the leading edge. This RCA 1974 NAB Show ad photo shows one of the first 'portable' TV cameras and a camera operator trying not to look uncomfortable.

The largest advertisers and exhibitors at the 1974 show were RCA, Ampex and some time base corrector (TBC) manufacturers. The first U-matic VCRs included built in TV tuners and were marketed to consumers in 1971. TV news departments first bought U-matics to aircheck competitor’s newscasts.

Accelerating processor speeds and memory capabilities made new digital TBC technologies possible. A TBC stabilized a U-matic’s inherently unstable video output timing to make it synchronous with house sync and legal for broadcasters to air. Compared to quad VTRs, U-matics were small and dirt cheap to buy and maintain, making TBCs for U-matics the new industry trend. It was the birth of ENG.

RCA and Ampex were the largest and most exciting exhibits, prominent at decades of NAB Shows. The first NAB Show I visited was as a salesperson in the 1977 Sony NAB exhibit when Sony Video Products Company in the US was 35 people. Five years later, Sony Broadcast launched Betacam.

The first consumer video format that produced clearer images than standard NTSC with additional bandwidth and fewer color artifacts was S-Video, which debuted in 1988. It was available in S-VHS and ED-Betamax videotape formats and was one of the surprises at the 1988 NAB Show. It was also the year D-2 digital VCRs debuted. The only long-form storage media for analog or digital video in 1988 was videotape. HDTV wasn’t shown in a NAB exhibit until 1990. The 2020 NAB Show would have been my 43rd consecutive NAB visit, the last 34 as a TV engineer who loves to write about it.

In 1988 I was editor of a professional video magazine, now silent. The October 1988 issue theme was ‘Resolution Revolution’. The new S-Video systems were not composite video and used more bandwidth than could be legally broadcast. But when displayed on a NTSC TV with S-Video inputs, it provided the first notably better pictures since color, and teased a high-definition TV future.

The Ultimate Video Recorder
In that same issue, my editorial predicted the ultimate video recorder. Who would have guessed it would become reality? I typed into my brand-new Macintosh Plus running at 8 MHz, “The ultimate video machine won’t be a machine at all, but will more likely resemble a fat, flat, caterpillar.” I was thinking of the form of a 1 MB memory chip I recently installed to double my new Mac’s memory, with a TV interface connector on one end.

I continued, “It will be a single, super-computing, super-conducting, integrated circuit capable of memorizing and playing hours of full-motion, random-access, high-definition digital video with multichannel digital audio. In other words, it will be a video program chip with megafemtobytes of memory and an interface connector.” Okay, I got a bit carried away, but the first video compression, h.261, didn’t debut until later that year, making the vision possible without super-conductors or megafemtobytes. Today, the ultimate video machine is the common thumb drive, SD card, SSD, DVR, or the cloud. 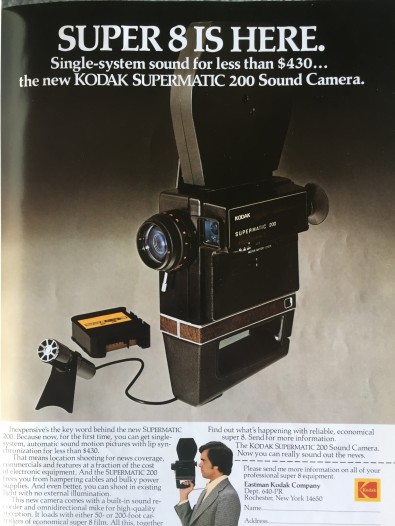 One of the last TV film camera ads in a NAB Preview issue ran in 1974, when Super 8 was trying to replace 16mm TV news film and some stations thought ENG was a fad.

Fast Forward To 2021 NAB Show
My crystal ball has been a bit glitchy, but I can predict with certainty that the upcoming October 2021 NAB Show in Las Vegas will be unlike any previous NAB Show, for myriad reasons. The industry has been busy and sidetracked by emergencies not on anyone’s radar of at the time of the last live NAB Show in 2019. What hasn’t changed since then?

Roughly six weeks out, I’ve seen relatively few Pre-NAB PR announcements of products debuts, demonstrations, exhibit highlights, or new hires. I’ve also not seen any scheduled press events or requests for editorial exhibit visits. Perhaps it is a bit too early. Incoming email over the next few weeks will paint a clearer picture of what to expect at LVCC.

As ATSC 3.0 infrastructures continue to expand in more new markets, broadcasters visiting the NAB Show will be watchful for new ideas that take advantage of the multiple new benefits unique to ATSC 3.0. Right now, NextGenTV is still learning to crawl. If there are any game-changing NextGenTV revelations planned for the 2021 NAB Show, it's being kept quiet.

The most focused technical information about ATSC 3.0 for broadcast engineers will be presented at the BEIT Conference on Saturday 9 October and Sunday the 10th.  The NAB recently stated "We will not be live streaming BEIT but we’re working on potentially streaming one or two highlight sessions." The proceedings will be available for sale at the show and beyond.

The most significant trend at the LVCC 2021 NAB Show will most likely be remote operations, because the market needs more alternatives for planned flexibility during uncertain times. Also, expect to see more broadcast software running on COTS PCs, Macs, tablets, and smart phones than ever before.

When I began TV engineering at WDAF-TV in 1967, the other engineers spoke of a corporate goal to reduce the entire engineering staff to a day person and a night person. I thought they were joking. Then came master control automation and unattended operation that eliminated overnight shifts.

Today’s engineers can access and attend to nearly all technical needs at their station, by smart phone or home computer. Reporters and crews can work from home. High-speed connectivity brings new opportunities. Times change, the industry changes, and annual NAB Shows epitomize it. Good luck to everyone headed to Las Vegas.