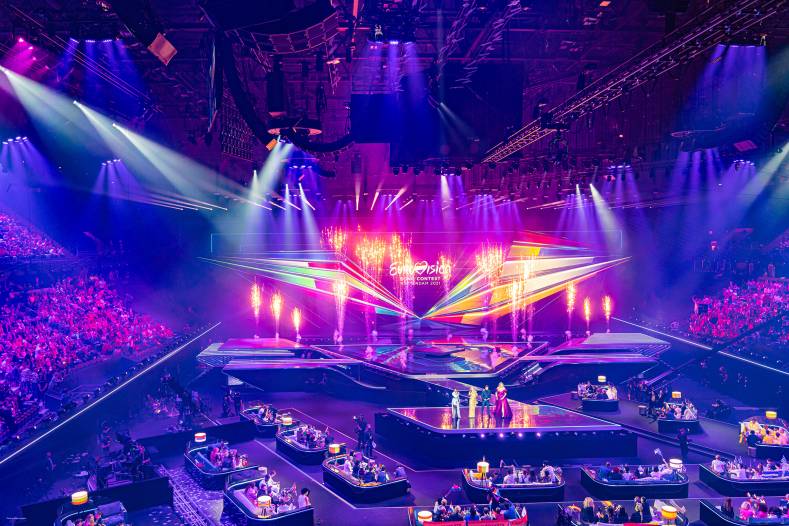 The show’s design team, supported by Ampco Flashlight, the official technical supplier for lighting, rigging and audio, provided one-hundred 4088 Directional Headsets and 40 d:facto 4018V Vocal Microphones from DPA Microphones for all of the show’s vocal performances.

The 2021 Eurovision Song Contest (ESC) was coordinated under the direction of a team of experts with decades of experience. Among them were ESC Head of Broadcast Sound Thijs Peters and ESC Head of Venue Sound Jeroen ten Brinke, longtime, consistent users of the DPA brand.

Due to the pandemic, the Eurovision team was extra cautious about hygiene. As a result, the production invested in 120 separate d:facto microphone grids to ensure each singer would have their own, for an added level of health safety. “

The DPA d:facto 4018 mics are available in an extremely linear version (4018VL), as well as one with a high-end boost (4018V), which was used for the ESC. The modular nature of the d:facto enables users to switch the adapter and capsule, making it the most flexible vocal microphone on the market. Based off DPA’s studio solutions, the d:facto also brings a true recording sound to the live stage or broadcast studio.

Additionally, the company’s classic 4088 Directional Headset Microphone has long been an industry standard. It offers an open and natural sound for both spoken word and vocal performance applications alike, earning it a top rank for Broadway and other theatre productions. “I use the 4088 headsets on almost every show because the look good and remains on position,” says ten Brinke.