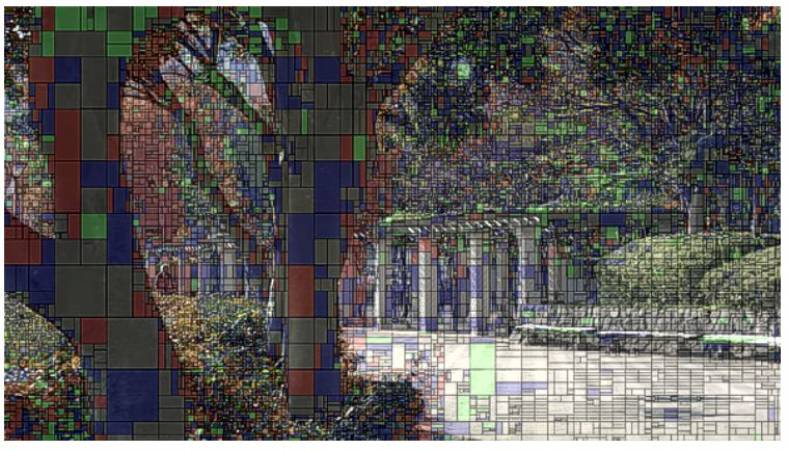 The DekTec Zond 265 can display various aspects of the EVC encoding structure such as prediction partitions on top of the decoded image.

DekTec adjusts to new dynamics, technologies, and solutions in 2021.

DekTec has been busy developing and manufacturing the next generations of PCI Express cards, USB devices and standalone modules for professional video. The company is also focused on application programming interfaces (APIs) to enable full software processing of UHD video (3840x2160) in real time. DekTec is based in Hilversum, The Netherlands, and owns offices in the US and the UK.

DekTec recently announced “The supply chain of electronic components is facing an unprecedented crisis. The lead time of some electronic components have changed from a few weeks to multiple months or even more than a year. The shortage appears to be due to increasing demand across new market segments such as IoT, home automation and cars. On top of that, chip suppliers have slowed down their production and investments in new facilities due to COVID and the slow economic climate it created. This difficult period is expected to last at least another year before electronic components manufacturing can catch up with demand.”

“DekTec has been closely monitoring this situation and has been working with its suppliers since half 2020 to secure components for this year and 2022. As a result, we are confident that our factories in the Netherlands will be able to continue to produce all our key products uninterrupted, so that we can provide our customers with all the solutions they need throughout this crisis,” the announcement said. The company also announced several solution improvements.

MPEG-H Tables Added to StreamXpert
StreamXpert now decodes MPEG-H audio and shows associated metadata in a concise way. Broadcasters can use it for confidence monitoring - checking that the audio actually decodes and that all parameters are configured properly. Equipment manufacturers can inspect and verify the MPEG-H audio stream and metadata in their product's output.

MPEG-H "3D" audio is a next-generation audio-coding, developed by MPEG and Fraunhofer IIS, to stream customizable audio to any device, from theater to mobile phone. Last year, StreamXpert was extended with analysis of MPEG-H audio in OTT, ATSC 3.0 and transport streams, providing an in-depth view of the structure of the MPEG-H stream. The MPEG-H analyzer has now been extended with a "raw table decoder", which shows all fields in the MPEG-H structures as they are sent over the line. 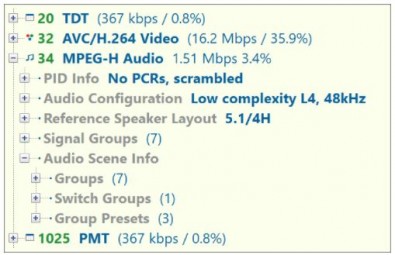 This new view allows MPEG-H encoder and decoder developers to check their algorithms to the last detail. Timing information such as the average interval is also displayed, as well as an indicator showing when a particular table is no longer being sent.

A key technique in MPEG-H is the use of 'audio objects', each of which has a specific position in space. The audio objects are rendered for the speaker layout used, producing a realistic 3D sound field. MPEG-H enables transmission of 7.1 audio with several audio objects in the same bandwidth as todays 5.1 surround broadcasts. By separating commentary language from music tracks and including those as separate audio objects, better compression can be achieved while at the same time giving the user more control over position and presence of language and commentary tracks.

Sending separate audio channels to the end device and mixing the streams there, provides the best audio experience for every situation. The user can select individual streams such as language or extra audio commentary, and even the listening position can be adjusted. The broadcaster determines which options the listener can adjust.

The addition of MPEG-H audio decoding and showing metadata keeps StreamXpert up with the latest broadcast standards. The new MPEG-H functionality is included in the standard StreamXpert v2.13 package and freely available to those who have purchased their StreamXpert license or latest maintenance extension less than 12 months ago.

The new audio standard is gaining momentum. It has been on air since 2017 on TV networks in South Korea under ATSC 3.0, and it has been selected for various new broadcast channels to be launched, amongst others in China and Brazil.

Matrix API 2.0 Improvements
DekTec's philosophy since its founding in 2000 is to do in software what can be done in software. PCIe cards transfer video efficiently to PC memory, where software does all the processing. Having the brains in software offers algorithmic flexibility and allows new features to be added quickly. And, with the ever-increasing power of x86 CPUs, software solutions automatically get more powerful every year, at an unbeatable price compared to dedicated hardware.

Processing lots of data in software in real time comes with its challenges, though. The DekTec DTA-2178 is now capable of receiving/transmitting eight 1080p60 or two 2160p60 signals simultaneously, pushing even today's CPUs and PC memory to the limit. To ensure that Matrix API 2.0 (SDI SDK) can keep up with the increased number of streams and high data rates, the company recently introduced some major optimizations.

One is to better utilize many-core CPUs, the main processing loop has been updated to use a thread pool that distributes the workload across multiple threads. Another optimization prevents cache line misses as much as possible by intelligently organizing memory accesses. A third improvement avoids the copying of blanking symbols, significantly reducing the amount of data sent over the PCIe bus for HANC and VANC lines.

These optimizations resulted in a performance improvement of approximately 30% faster processing of 2160p60 frames. DekTec is committed to continuously improving the Matrix API. In the upcoming release we are planning further reduction of the memory load by a zero-copy architecture and extended cache optimizations.

Version 5 of Zond 265 Analysis Software Adds EVC Support
MPEG-5 Essential Video Coding (EVC) is a new video compression standard proposed by Samsung, Huawei and Qualcomm with efficiency comparable to HEVC, or better. A key important goal for EVC has been the timely availability of licensing terms, the lack of which has slowed widespread deployment of HEVC. 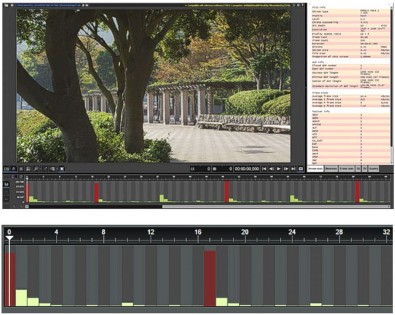 MPEG-5 Essential Video Coding (EVC) was developed with several requirements in mind. One was coding efficiency comparable to HEVC, but without the licensing restrictions. It also needed complexity suitable for real time encoding and decoding, and the ability to address existing and emerging use cases, including offline encoding for streaming VOD and live OTT streaming.

Two profiles (sets of coding tools) have been defined for EVC. The 'Baseline' profile is royalty-free and it uses coding tools that are at least 20 years old, or submitted with a "royalty-free" declaration. Baseline performance compares in quality to H.264, at approximately 31% lower bitrate.

The 'Main' EVC profile offers higher performance but is royalty-bearing. It adds a small number of additional tools, each providing a significant improvement in compression performance. The Main tools are isolated from each other so that they can be switched on/off independently. Main profile performance delivers the quality of HEVC Main 10, at approximately 26% lower bitrate.