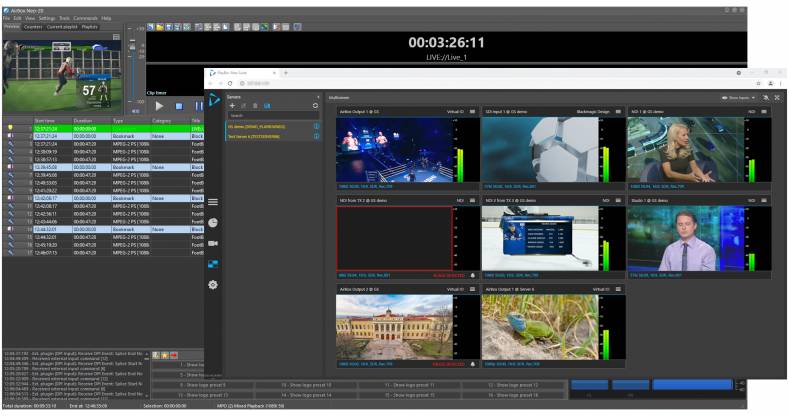 An example of the PlayBox Neo AirBox Neo-20 user interface.

PlayBox Neo announces new additions to the operational capabilities and connectivity of its TV Channel-in-a-Box, AirBox Neo-20 and Capture Suite.

PlayBox Neo Channel-in-a-Box provides all the facilities needed to create and maintain single or multiple television channels within a seamless workflow for local or remote control. Based on AirBox Neo-20 playout automation, the system can be configured to any required scale from optional elements such as Capture Suite media ingest, TitleBox Neo-20 interactive character generator and graphics, and ListBox Neo-20 scheduling. Terrestrial, satellite, cable and IP-streamed transmission are all fully supported.

AirBox Neo-20 can be configured for round-the-clock automated operation on any scale from a regional station or corporate TV service up to a global network broadcasting to multiple timezones in multiple languages. Playlist scheduling can be performed weeks ahead of actual transmission while retaining the freedom to trim, edit or reschedule content or integrate with live production. Safeguards are provided to ensure uninterrupted operation if content files or even entire schedules are missing or conflicting timed events are present. Six new features have been introduced:

Capture Suite was developed for use within the UHD/HD/SD production workflow of television networks, post-production facilities or playout service-providers. It allows users to control multiple ingest channels across multiple servers from a single web user interface. Functions such as input selection, ingest presets, file-naming conventions, assignments and auto-transfer can be performed quickly and easily. Five new features are announced: