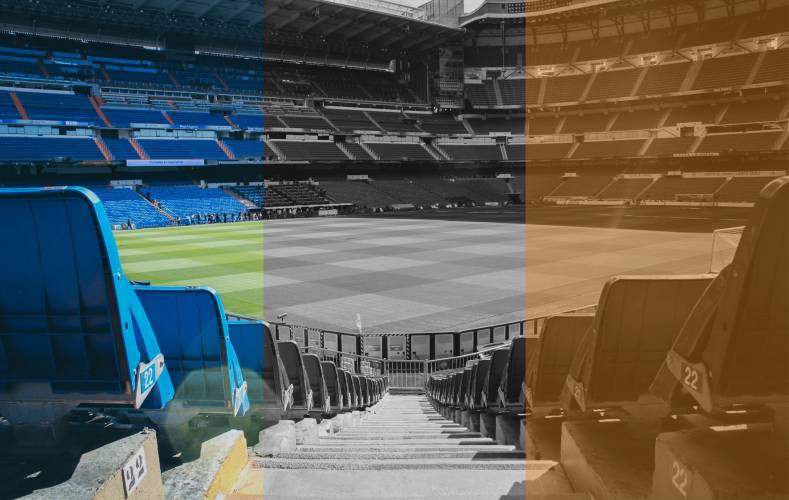 IP is empowering broadcasters the world over to improve flexibility, scalability and resilience. We often describe the internet in “fluffy cloud” terms, but to truly leverage its capabilities, broadcasters must now dig into the detail of its operation.

To understand the power of the internet and its ability to provide ad-hoc connectivity, it’s worth thinking about how we would have sent video and audio across the planet and interacted with other international broadcasters.

Video and audio are relentlessly hungry for data bandwidth. The continuous nature of video frames and audio samples stretch any network leading us to use point-to-point delivery for much of our media distribution and contribution needs.

Historically Static
Satellite links and dedicated lines have been at the core of media transfer for nearly fifty years. Although this technology has served us well, and continues to do so, it’s proved incredibly expensive and relatively inflexible. Yes, we have mobile satellite uplink trucks, but the latency limitations and line-of-site requirements are making this technology difficult to use.

With a single hop up-down link in one direction only, latencies of 250ms for a geo-stationary orbit satellite are a reality of physics, doubling to over 500ms for full duplex. Although atmospheric conditions rarely affect satellite links, they do occur and there is little scope for diverse routing for a single truck.

Broadcast specific fixed lines may be low in latency, but the custom nature for SDI and AES delivery are now making them seriously uneconomical, especially when we consider their lack of flexibility and long installation times.

Internet Topology
The internet is a whole series of interconnected networks from many different telcos and service providers who communicate through the Border Gateway Protocol (BGP) to exchange routing information. Network providers have no knowledge of the internal workings of each other and rely on the BGP to know where to route IP packets between them.

BGP is the core protocol that allows telcos, otherwise known as Autonomous Systems (AS), to communicate with each other allowing the routing of IP packets throughout the world. It’s the application of the BGP that and the data transfer between ASes that is effectively the core of the internet and facilitates seamless exchange of data.

Assuming an AS describes a single telco or service provider, then the internet is made of many such vendors. Users connect through their ISP (Internet Service Provider), which in turn is likely to be an AS, but then connects to other ASes thus giving access to servers around the world. The BGP advertises its connections to other connected ASes so that they can route packets between servers and clients. Furthermore, BGP allows policies to be applied to the routes so that they can be classified in terms of priority and application. For example, commercial connectivity requiring priority throughput could be give preference over traffic for home use. 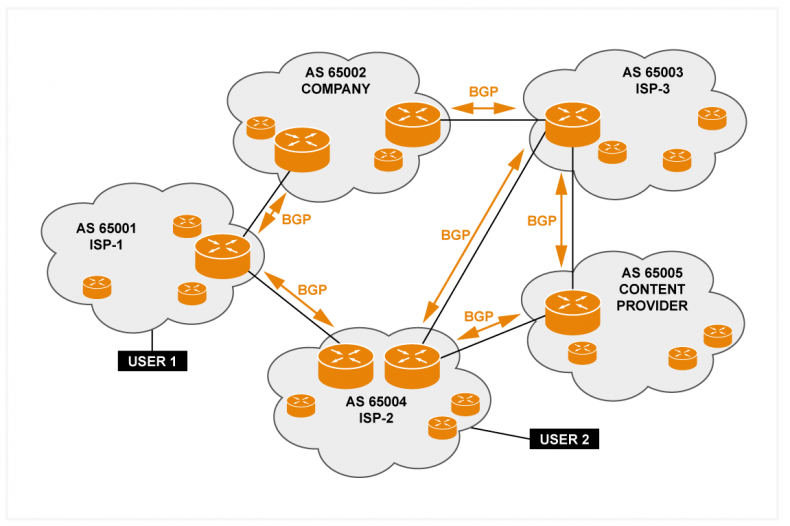 Figure 1 – The internet is an international group of collaborating ASes exchanging routing information through BGP, this in turn allows them to send user requests and responses around the world. Here, user-1 will access the internet via ISP-1 and may want to exchange data with ISP-2, the shortest route is from AS65001 to AS65004, however, if this fails, there are many other routes available but using them will increase latency. A deep knowledge of the internet connectivity is required to keep latency low and data throughput high.

Centralized Efficiency
Critically, BGP is decentralized allowing each AS to act autonomously and only advertise the routes of interest to other telcos and service providers, thus empowering telcos to determine their own architectures and policies for their geographic location without having to share this commercially confidential information with others.

One of the reasons the internet, and IP in general, is so successful is that IP is hardware agnostic. It doesn’t care whether it’s being transported over WiFi, ethernet or HDLC. IP packets are encapsulated in a low-level transport protocol which does not change the IP packet in anyway, thus leaving the packet to be delivered to the end destination without being changed on route by the transport mechanism.

Another important aspect of IP is that it is packet switched, as opposed to the circuit switched nature of SDI and AES circuits. Not only does this facilitate incredible flexibility, scalability and resilience, but IP routers and their supporting protocols, remove the switching decisions from an overall management system and allow them to happen at the transport layer and distributed network level.

For the internet to operate as reliably as it does, not needing an overarching management system controlled by one entity is incredibly powerful. There must be agreement between different international telcos on the version of BGP they use, the IP addressing schemes they adopt and the AS addressing numbers used but allowing the packet routing to occur at the transport level both encourages autonomy and collaboration. In fact, without this simultaneous autonomy and collaboration, it’s unlikely the internet would exist in the manner it does today.

Interconnected ASes
We connect to the internet through ISPs, which can be subsets of ASes or ASes in their own right, depending on the size of the telco. For example, a smaller telco may only be regional based and will connect to a global AS to gain the connectivity to the rest of the world. Or it may connect to multiple ASes which in turn provide international connectivity. Internet exchanges are gaining in popularity as they act as intermediaries to facilitate international connectivity of ASes and help improve speed and reduce latency.

The end goal for telcos is to increase the number of clients they connect to, keep latency low and reliability high. The more connectivity a telco has to the wider network of other ASes, then the easier they can achieve low latency and high reliability. The diverse number of connections to different telcos further encourages reliability as networks can automatically determine alternative routes if one connection fails.

Having a distributed network with seamless international connectivity of multiple telcos is the power of the internet and provides broadcasters with incredible opportunity for provision of contribution circuits.

There’s Always A Cost
It’s important to remember that the internet is not “free”, there are huge costs associated with the infrastructure expansion. Just think how much it costs to lay armor protected waterproof cable under the oceans, and that’s before we start considering the high-end routers needed to connect them together.

Although broadcasters still have an unquenchable thirst for data bandwidth, and this is unlikely to change in the imminent future, accessibility to the internet through highspeed fiber is much easier now than it’s ever been. Telcos are increasing their connectivity points, whether at sports stadiums or into cloud datacenters and this is providing much easier access for broadcasters.

In Part 2, we look at the types of broadcast applications that can benefit from internet connectivity and the practicalities of sending video, audio and metadata across the internet to broadcast facilities and datacenters.