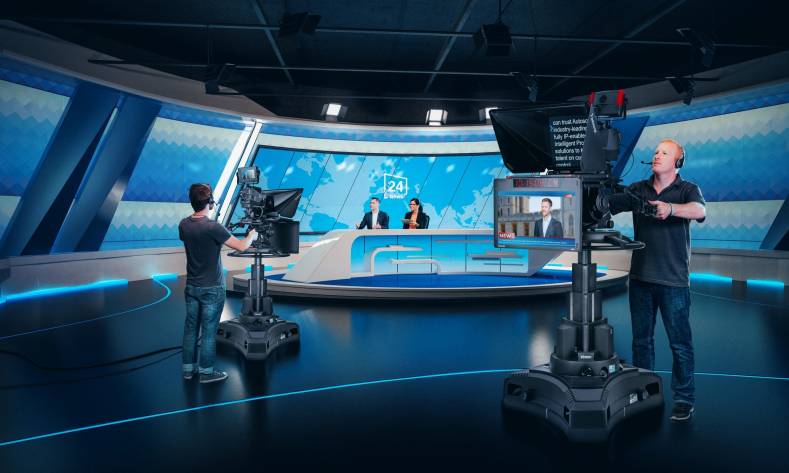 Autoscript has unveiled Autoscript Voice — a ground-breaking industry-first in prompting control technology. Using Voice for WinPlus-IP, presenters are empowered with reliable and accurate real-time control of their prompted script simply by speaking the words, free from dependence on foot or hand controls.

Designed as part of WinPlus-IP, the fully IP-enabled prompting software, Voice utilises patent pending technology to provide a bespoke solution designed for the next generation of live television production. Voice actively monitors the production audio feed to automatically advance the script as the words are spoken. Real time speech recognition combined with proprietary algorithms and advanced pattern matching ensures that the script always scrolls in perfect synchronisation with the presenter. Voice will even pause for adlibs and resume scrolling when the presenter is back on script - allowing them to comfortably read the script without the extra effort of also controlling the prompter. The system automatically handles numerous script and show formats, can be used by multiple presenters and can operate simultaneously with other Autoscript scroll control devices.

“Everyone is talking about Voice,” said Philip Dalgoutte, product manager, Autoscript. “The networks that have been using Autoscript Voice in their daily live operations have been astounded by the quality of the workflow.” Adding, “For presenters, it’s almost unbelievable that such precise prompting control is possible by simply talking. It’s effortless, with no controllers for them to operate they can focus on presenting and everything just works.”

Working closely with a major US television network over a period of three years, including extended beta testing, shadowing live newscasts, Autoscript engineers have created a fully featured control system fit for the most demanding real-world workflows. The consultation resulted in an intelligent control system that addresses the complexities of live news broadcasts and entertainment productions, both in the studio and control room. Following the successful beta test phase, Voice is now being used by the network in their studios on daily live programming.

The new Autoscript Voice teleprompting control system can be used to control output to EPIC-IP and EVO-IP prompt monitors and Xbox-IP Scroll Engines and is available for demonstration from Autoscript representatives now.