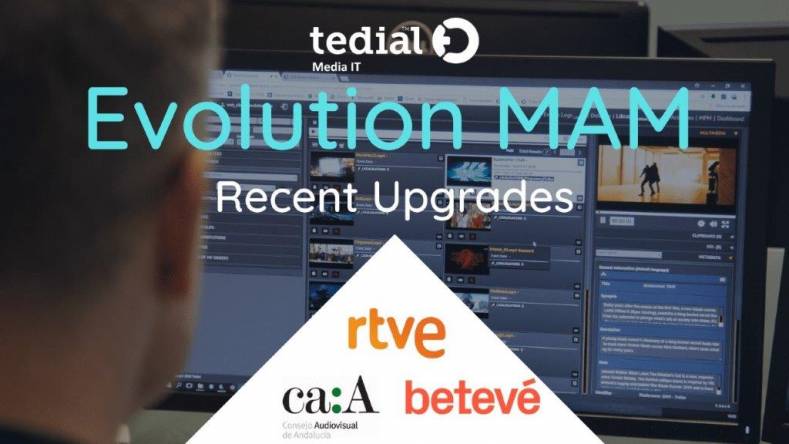 Upgrades to Evolution from Tarsys MAMs.

Three Spanish customers who all upgraded in 2020 to Tedial’s Evolution MAM include the state-owned public broadcaster RTVE, the public television station of Barcelona (BTV) ‘betevé’, and the Andalusia Audiovisual Council (CAA).

Julian Fernandez-Campon, CTO Tedial says, “We are really happy to have been able to assist these customers in what was a difficult year for everyone. Over the years, we have built a true partner relationship with these customers and we are proud that they continue to trust Tedial by implementing these upgrades.”

Betevé, upgraded from its original Tarsys MAM, installed in 2003, to the latest Evolution version to accommodate its move from SD to HD, its migration to web platforms, and to have the ability to integrate with social media networks. The upgrade of the public broadcaster system uses a virtualized infrastructure, with a web UI for remote operations. The project also included LTO4 content migration to LTO8, and MAM integration with the NRCS (iNews), proprietary traffic system (XMI TVR Manager), and the Avid Interplay production system.

Vicenç Oller, Systems Manager, says, “Evolution has enabled us to seamlessly transition to new formats, adopt new web tools, gain agility and increase the efficiency of daily production. We are excited to finish the LTO migration so that we can enjoy the true potential of the new system.”

Andalusia Audiovisual Council (CAA), a Tedial customer since 2008, relies on its MAM as the core of its monitoring, recording, logging and archive system. The multi-site MAM has a main central node located in Sevilla and 20 remote sites across Andalusia. CAA has now successfully upgraded its Tedial Tarsys3 version to Evolution with more than 9 million hours of archived content.

RTVE has also upgraded its 10-year-old Tedial Tarsys3 MAM, central to its TVE Documentary Archive, to Evolution as part of a major project led by Telefónica. The multi-site feature of the new MAM has enabled a major architectural shift from three independent systems to a single centralized system in RTVE’s headquarters in Madrid with a new Disaster Recovery site in Barcelona. The feature also allows operations with high-resolution materials to be executed locally, while users have access to a centralized low-resolution database. The project includes integration with Marquis, Vantage, Aurora, Diva and Filenet.