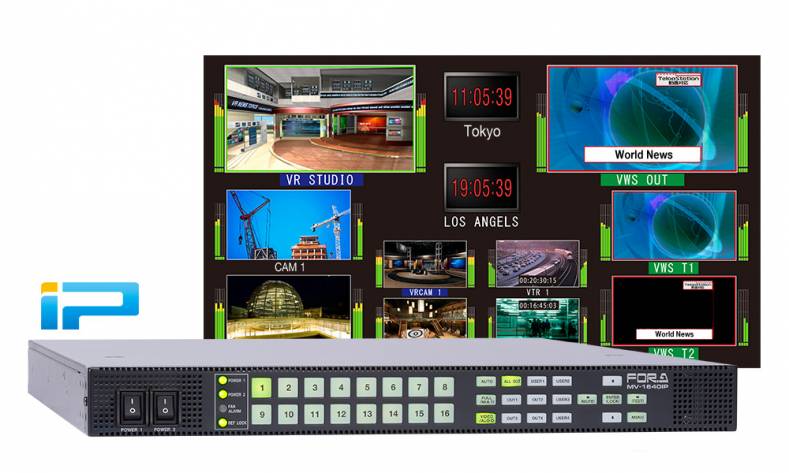 FOR-A's MV-1640IP supports up to five monitor outputs and 25 windows.

Designed for IP or hybrid production workflows, the 1RU MV-1640IP supports up to 32 inputs (16 IP and 16 SDI) and five monitor outputs.

The multiviewer also includes many of the same features found in other MV Series multiviewers for baseband systems.

With an SFP+ port, FOR-A's MV-1640IP is compatible with 10GbE and 25GbE environments. It supports the SMPTE ST 2110 standard for IP-based video distribution that is used in broadcast and distribution facilities. It can input 16 streams of SMPTE ST 2110-10/20/30/40 HD video via one port – and by using two SFP+ connectors, it can support the redundant environment of SMPTE ST 2022-7. The MV-1640IP uses NMOS for stream switching.

An optional SDI input card enables the MV-1640IP to receive inputs via SDI for use in a hybrid IP/SDI environment. The optional card supports up to 16 3G/HD/SD-SDI signals, and allows the unit to display a mixture of IP sources and SDI sources. Cascading input is also supported, so multiple multiviewers and displays can be combined into more than 16 IP sources. With the optional interface board, the MV-1640IP also supports GPI I/O, LTC input, and reference input.

The MV-1640IP supports up to five monitor outputs and 25 windows, with one 12G/3G/HD-SDI and three 3G/HD-SDI output terminals (that can be used for one 4K or four HD outputs), plus one HDMI output. The minimum processing delay is one field. It also supports 4K-to-2K down-resizing. An integrated layout manager allows custom layouts, and saved layouts can be recalled directly from the unit’s front control panel. SNMP protocol support is standard for monitoring.

With its live-view function, the MV-1640IP allows users to monitor its output video from any web-enabled device, including laptops, tablets, and mobile phones. The M-JPEG streaming output serves as a simple way to monitor input signals outside of the control room. Plus, with a standard attached application for Windows, pre-alarm recording is possible on Windows-based computers, so footage can be stored and reviewed.

“Video professionals need a reliable multiviewer that supports an IP-based workflow, but has the familiarity of a multiviewer from a traditional baseband system,” explained Satoshi Kanemura, president of FOR-A America. “The MV-1640IP delivers the important features and intuitive control needed for IP or hybrid production environments.”