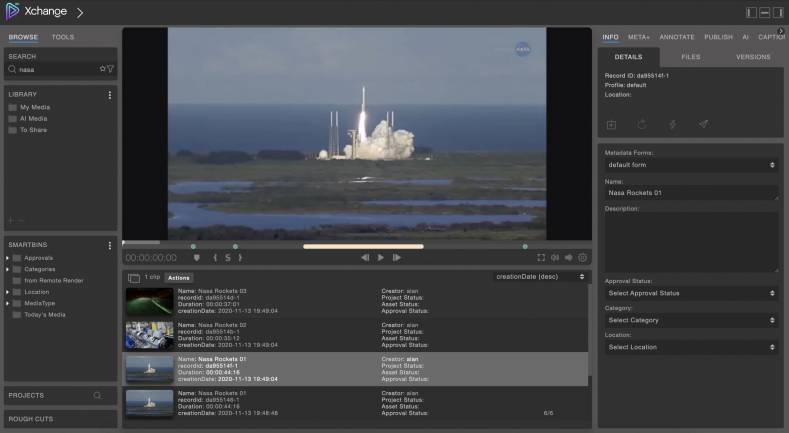 The company’s Xchange media asset management platform is now able to access and log “growing files” from live broadcast feeds as the content is being recorded, creating powerful new efficiencies for news and sports producers, directors, and editors.

Most broadcasters today have a tool for ingesting live feeds, while others might have a platform that can manage media. But there are few solutions that bridge file-based workflows and signal-based architecture, said Felipe Gonzales for Primestream.

“Our Xchange solution does exactly that, with a powerful automation engine that ties together software, hardware, people, and improved workflows. This gives media professionals the flexibility to create and customize the solution with smart workflows and to do this as their needs evolve over time — effectively future-proofing the operation.”

While Xchange has always had the ability to ingest file-based content, producers previously had to wait until the entire program was ingested and encoded before they could access and log the content in Xchange. The new Xchange ingest access feature enables journalists, editors, assistant directors, and producers to start creating a rough-cut edit of the program in real time as the live content is being captured in SDI- or IP-based operations, and then deliver the sequence immediately to air.

The operator can review a live clip and use the timeline tools in Xchange to mark beginning and ending points of interesting segments, and also add metadata with descriptive comments to facilitate easy search and retrieval of relevant content. For example, when an extraordinary moment happens during a sports broadcast, a producer can put together a sequence of relevant clips during the game that can be immediately played out to air.

In addition, the Xchange ingest access capability for growing files also brings new efficiencies to postproduction. Once the producer has marked up the rough-cut edit, it can be handed off to an editor for further enhancement and polishing, such as adding transitions and graphics, for inclusion in a later scheduled program. The edit previously stored by the producer for the rough cut is instantly available to editors working in the Xchange shared environment, removing editing silos and facilitating remote collaboration. Xchange offers seamless integration with NLE tools from Adobe or Apple.

“By enabling universal collaboration and access, Xchange is perfect for remote media workflows,” Gonzales said. “And now, with the ability to access growing files, Xchange is even more ideally suited for live news and sports operations that need to deliver up-to-the-second content as rapidly as possible.”

He added, “With these latest enhancements, Xchange further demonstrates Primestream’s leadership in developing systems that optimize media creativity and create a world where working with media is as easy as speaking one’s native language. That means removing as much complexity and as many manual tasks as possible from creative workflows and making it easier than ever to create content, regardless of physical location or infrastructure.”