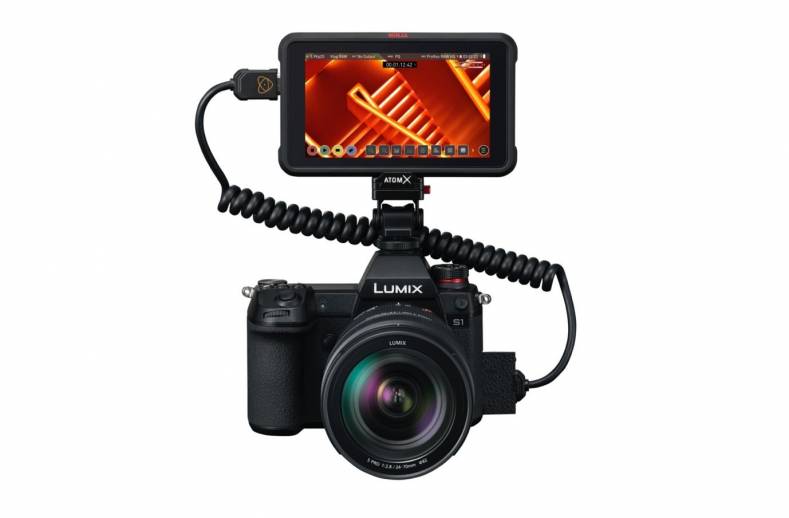 Panasonic LUMIX BGH1 is a 4K Box style camera recently released, which when combined with the Atomos Ninja V, will record up to 4K DCI ProRes RAW and up to 3.7K anamorphic RAW.

The camera’s compact size makes it perfect for gimbal and drone shooting, plus other areas like live streaming, vlogging and cinema production. Its Micro Four Thirds image sensor provides flexible lens options, anamorphic capture and dual native ISO provide the next level of production utilising the power of ProRes RAW.

The Ninja V and LUMIX BGH1 combination can also work in sync for multicamera productions, and this is facilitated by the LTC and Genlock inputs perfectly complemented with the Atomos UltraSync One wireless sync system.

The LUMIX S1, Panasonic’s full-frame mirrorless shooter, shares the same ProRes RAW features from the S1H. It will record up to 5.9k ProRes RAW when paired with the Ninja V.

“The Ninja V allows users to accurately monitor the RAW signal on its daylight-viewable 5” 1000nit brightness HDR screen,” say Atomos. “Setup is simple when the camera is attached with perfectly tuned color settings applied automatically. Users can then view the RAW image accurately in HDR in a choice of HLG and PQ (HDR10) formats. The Ninja V offers touchscreen access to tools like waveforms, 1-1 magnification and focus peaking, allowing them to perfect their RAW video. The Ninja V then records the ProRes RAW data onto a removable AtomX SSDmini or other SSD drives. When shooting is complete, the drive is removed and connected to a computer via USB for immediate offload and editing.”