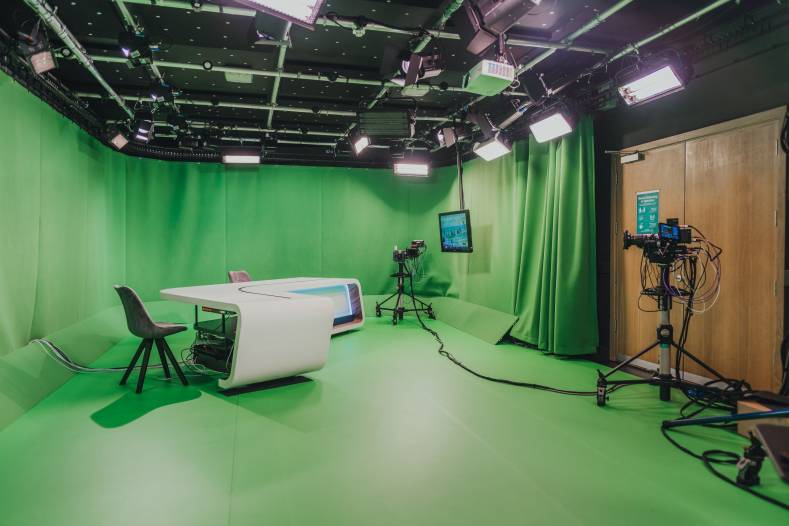 Built at the home of the Racing TV channel, at Ealing Studios. Photo credit Tom Aizenberg.

The studio’s design is intended to take viewers as close to the racecourse action as possible. The new studio will work as a hub by bringing in all of Racing TV’s race-day feeds, with reporters at every course, creating a ‘watch together’ racing community experience.

Built at the home of the Racing TV channel, at Ealing Studios, the studio has been created in collaboration with Timeline TV, which has been RMG’s technical managed services provider since 2012, and MOOV, industry leaders in broadcast graphics and virtual studios.

There are four zones: A main presentation desk for a panel of up to three guests per live programme; a stand-up position with augmented reality big screen, to integrate data and analysis into panel discussions; a timing information data area for analytical shows such as The Verdict; a panoramic area for festival coverage and the new home for shows such as the flagship Luck on Sunday.

Adam Binns, Director of Broadcast and Production at RMG, said: “The studio will enable Racing TV to deliver immersive and interactive horseracing presentation coverage to our audiences.

“The virtual and augmented reality environment helps us to keep the racing fraternity closely linked on an ongoing basis and will be the perfect platform for video-conferencing and other remote tools, which are so vital now. We are very grateful for all the support and expertise which Timeline TV and MOOV have contributed to the project.”

Although relatively small (6m x 6m), the studio appears as an expansive space with four operational areas. Using Mo-Sys StarTracker, this allows for extra flexibility in camera angles, and the types of cameras, even jibs, to be in the studio.

David Harnett, Head of Operations at Timeline commented: “This has been a hugely collaborative project between RMG, MOOV and Timeline TV. Racing TV required a studio that would be flexible and adaptable to allow them to create different sets for a variety of their horseracing shows.

“We already work alongside MOOV at BT Sport’s Broadcast Centre, so we had no hesitation in collaborating with them and relied on their expertise and knowledge to deliver a truly immersive and innovative virtual reality studio.”