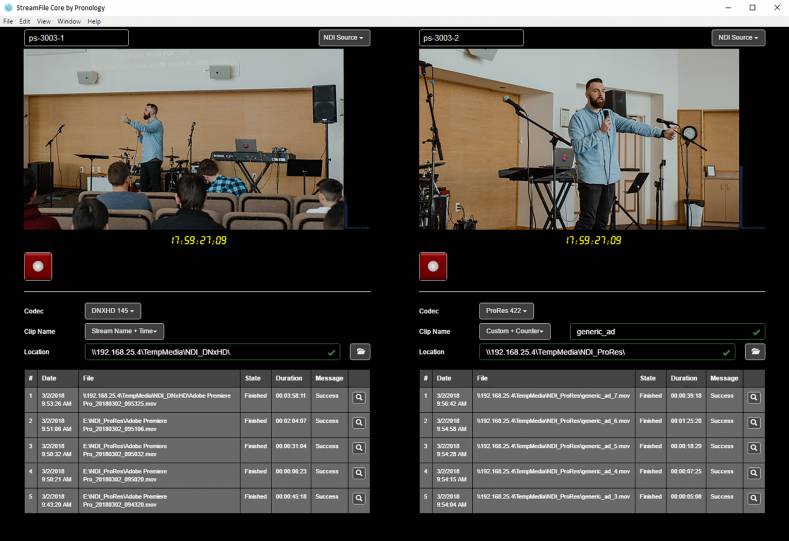 StreamFile Core is described as a tool for receiving IP video protocols and encoding them into editor-friendly formats such as ProRes, DNx, XDCam and others. This new version integrates both NewTek NDI and Haivision SRT support providing increased IP and streaming capabilities.

The update also allows for an unlimited number of record channels based on hardware performance. StreamFile Core helps facilitate the move towards remote production while helping the influx of production and technical staff working from home.

“StreamFile Core allows our customers to receive media in new ways, such as Zoom, Skype and IP streams, while still maintaining broadcast quality standards,” says Jonathan Aroesty, president of Pronology. “StreamFile Core is a cost-effective tool designed to run on macOS or Windows 10 system with minimal setup allowing companies of any size to optimize remote workflows.”

This update also adds support for several additional codecs including the ability to record ProRes and DNx with both .mxf and .mov wrappers. This allows users working from home, on location or anywhere, to take their NDI or SRT streams and turn them into edit-ready files for Avid Media Composer, Adobe Premiere, Final Cut Pro and others. StreamFile Core also has the ability to work as a cloud-based model using AWS. Licensing and support is available for both short and long term projects.

Pronology further added some stability features into the software that allow for automatic resolution scaling, frame rate detection and correction.

“StreamFile Core was built upon the same technology that powers Pronology’s award-winning mRes encoder,” says Aroesty. “It enables facilities and studios moving to an IP-based platform to utilize their existing non-linear editing, graphics and digital system infrastructures as they transition to IP. StreamFile Core bridges the gap between IP-based video technology and legacy baseband recording workflows.”