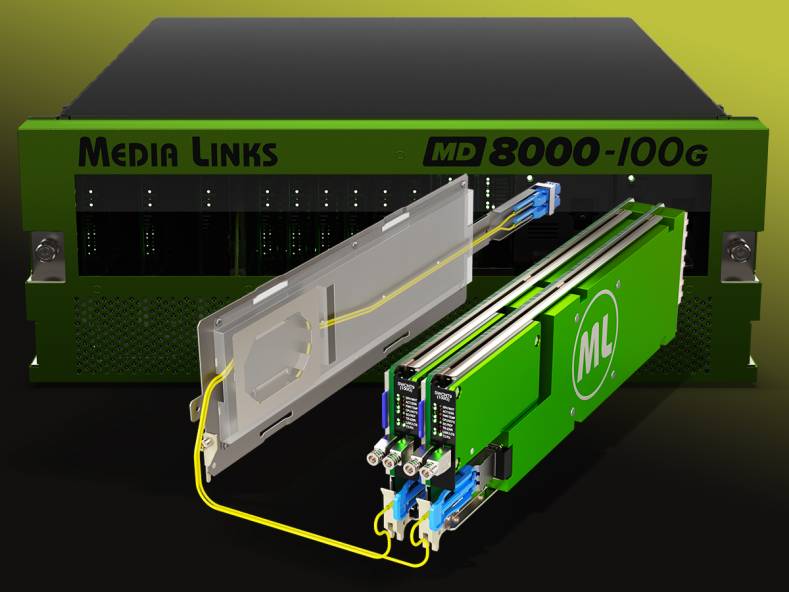 The Media Links 8000 100G is designed to send an increasing number of channels of video signals to/from remote locations.

There was a time, not too long ago, when 100 Gigabit Ethernet (100GbE) IP switching was only considered for IT data centers moving large amounts of financial and military data. With the growth of media and the urgent need for remotely controlled production infrastructures, 100 Gb/s is no longer a far off dream for content distribution system engineers and has become a slow-but-steadily emerging contribution reality that meets the capacity needs of today’s bandwidth-hungry media industry.

Indeed, 100 Gb/s deployments are becoming more common today, with some of the biggest infrastructure providers (like AT&T, Verizon and others) rolling out 100 Gb/s topologies.

The global pandemic has further accelerated the need to deploy bandwidth intensive solutions now, not down the road, especially for sending the highest quality video and other media signals from remote destinations such as high profile sporting and entertainment venues to distant production/broadcast studios.

NBC Sports recently produced and broadcast a college football game from Notre Dame University, backhauling thirty 1080p HDR feeds and a dozen 1080i feeds to its main production facility in Stamford, Connecticut. That alone required over 40Gbps of bandwidth. Raw SDI camera feeds were converted to IP at the stadium using the Telco’s Media Links MD8000 media over IP transport platform, optically transmitted and switched through their media core network of Media Links MDX high bandwidth network switches. Then converted back to SDI with complimentary Media Links MD8000 chassis’ in Stamford. There, from roughly 750 miles away, the feeds were mixed and switched for live broadcast to a huge sports audience across the USA.

This production was basically the new reality in what is termed “remote production”, defined as controlling and sending media signals remotely. In this case, Media Links equipment was utilized, supporting up to 100GbE edge gateways along with core network switching infrastructure, and managed through a software orchestration layer that not only configures/provisions the various media services, but monitors and assures the performance of the network and equipment as well. 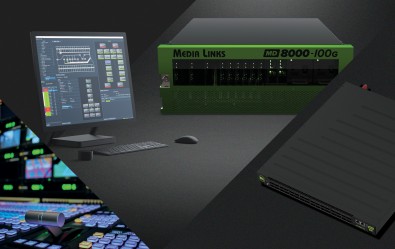 He added that the direct link between the South Bend, Indiana stadium (home to Notre Dame University) and Stamford also included data channels.

The product developers at Media Links, with its headquarters in Kanagawa, Japan, knew that many data centric switches have certain inadequacies when used to process real time media services. “Our special sauce is software (on COTS hardware) that provides media-centric capabilities to make the switch more robust and especially tuned for media service flows,” said Podesla.

Among several “media” focused enhancements, switch ports are guaranteed to be protected against over provisioning. The company has included Over-Provisioning/Over-Subscription Prevention to guard against accidental port oversubscription that can cause errors in every media flow and possible corruption in all media services. This ensures that the integrity of media is maintained across the entire network.

The real value of the Media Links 100G Series of IP Gateways, Aggregation/Core switches and Software Control System is in the precise way that signals can be routed using software-defined networking technology. Any media flow can be given guaranteed bandwidth (in increments of 1 Mbit/s), and the end-to-end connection can be reserved within the switch fabric to assure uninterrupted “media” signal flows. This is in contrast to many other more data-centric processing/switching devices that use “best-effort” routing.

“For media signals, this difference is critical; adequate network bandwidth must be available along the entire route that a signal travels,” said Podesla. “Typical non-time critical data signals and file transfers can withstand momentary bottlenecks, whereas real-time video or audio signals become useless if all of their packets are not delivered intact in proper cadence and in the correct order.”

With the Media Links 100G Series platform, every route for every media signal can be planned and provisioned for the entire span of that flow, and the system can ensure that none of the selected paths are overloaded.

Recently introduced, the Media Links MDX 100Gbps high-bandwidth network switches (models MDX32C and MDX48X6C) greatly expand the reach and flexibility of IP edge devices utilizing various bandwidths. These units can accept 10G to 100G trunk signals from different sources and interchange signals between them while ensuring non-blocking connectivity between every input and every output.

Incorporated into the MDX 100G switches is “Loop Protection,” which pre-empts media flows from feeding back on themselves (aka “flooding”) due to inadvertent provisioning and causing large service interruptions or outages. Also provided is “Network Troubleshooting” capability that helps with fault isolation and resolution, minimizing service downtime through monitoring various traps such as FCS (Frame Check Sequence) Threshold Errors, LLDP (Link Layer Discovery Protocol) and Optical levels. Additionally, Multi-Point Service Protection ensures media flows as well as data VLANs and in-band telemetry are protected against hardware or fiber failures. 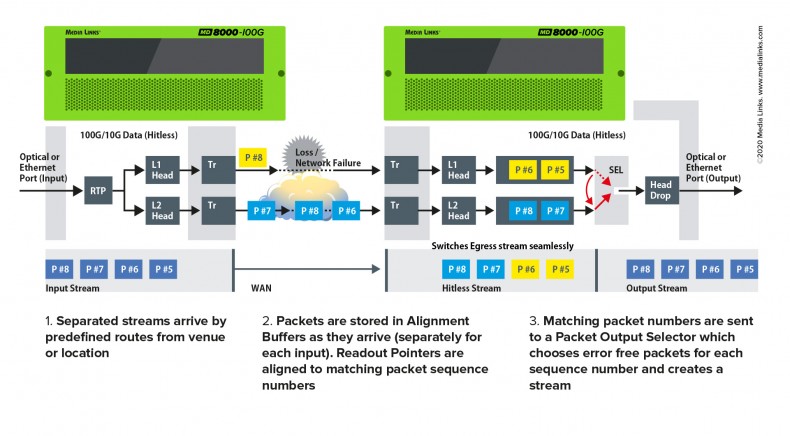 Any errors detected in the network can be eliminated by switching to the alternate error-free path.

To move signals into and out of the SDI domain, the company’s MD8000-100G Edition gateway allows a user to multiplex a larger number of video feeds into that 100 Gb/s pipe and send it through the network, and control the routing using Media Links MDX switches.

“We have our gateway products at the edge of the network in stadiums and other sporting venues,” said Podesla. “For the typical high profile sporting/entertainment events that we participate in, these devices in addition to supporting more and more video channels, must be “bullet-proof.” They can’t fall victim to drop outs, freezes or interruptions during a live sports broadcast. That would be unacceptable to everyone involved in that high value production.”

That’s why 100 GB/s transport and switching meets the need for moving an increasing number of camera feeds. Initially during the early days of this 2020 pandemic, most live sporting events shut down. Now towards the end of the year we are seeing more live events, although with limited on-site spectator attendance. With the need to protect their staffs and save costs, broadcasters are not sending as many people to these events and are instead sending back more camera fields with the need to control them remotely. This of course demands additional bandwidth with minimal latency (both in the actual network path routes as well as in the video processing equipment).

The extra bandwidth also comes in handy for configuring redundant signal paths to ensure system reliability. 100 Gb is also good for those looking to transition to native 4K production. Next year’s summer Olympics in Tokyo will most likely utilize at least some 100 Gb/s network paths, as will many other prominent multi-venue sporting events (e.g. the World Cup). Currently, Media Links has over a thousand of its MD8000 product deployed in hundreds of venues/facilities across the world in various configurations. Via an in-field conversion kit, older MD8000 chassis can have their current 10Gb/s network trunks upgraded to 100Gb/s performance.

The Value Is In The Capacity

A big issue that has limited initial widespread adoption of 100Gb infrastructures is cost, but Podesla said the increase is only a “moderate” premium, certainly not ten-fold from 10Gb.

The price of components continues to come down, so cost should not be the main decision driving the migration to 100Gb infrastructures,” said Podesla. “Believe me, 100Gb/s transport & switching is coming a lot faster than we thought even two years ago. It’s a ten times increase in bandwidth but a far less increment in cost increase.“

As producers of sporting events get a better understanding of how to deploy remote workflows to gain the most value, they will look to increase their production value. As mentioned previously, the current global C-19 virus pandemic is accelerating that need. The need to work more remotely requires more bandwidth, especially for the highest quality media feeds transported over a robust, resilient, optical network for mission-critical contribution performance.

It was only a short time ago that 10 Gb/s data throughput sounded like a lot. With 1080p, 4K and 8K cameras and other equipment now being regularly implemented, the need for more media transport & switching bandwidth will remain insatiable.