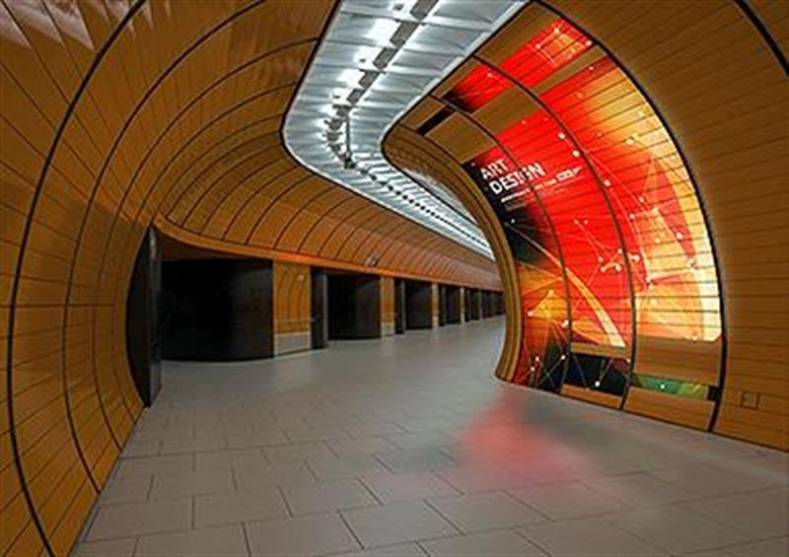 The latest displays looking to gain a footing in the studio production arena are made from a technology known to mobile phone developers called organic liquid crystal displays (OLCD). It’s now being tested for dynamic set elements where video can be wrapped around and on top of a set piece. Other ultra-thin, shapeable technologies being discussed but not yet implemented include Flexible Open Frame OLED, In-Glass Wallpaper OLED and Ultra Stretch LCD signage displays.

We’ve all seen or heard about flexible, or free-form, video display technology. It’s found in mobile phone and tablets today but could be outfitting your next TV studio. The technology enables low cost, large area and shapeable displays that can be used virtually anywhere. And, unlike other flexible display approaches, OLCD is naturally scalable to large sizes (e.g., studio walls).

Liquid crystal display, or LCD, is the most widely used technology that accounts for more than 90% of the displays sold today. However, they are made with glass that limits the ability to flex and conform to different surfaces within a studio. If you replace the glass with ultra-thin plastic, an LCD can be made to bend, by carefully selecting the liquid crystal materials and optimizing the assembly process.

The technology is not new: it’s been in development since 2014. Yet OLCD can now achieve the same performance (and size) as your TV at home, but on plastic. The manufacturing process is said to be compatible with existing manufacturing equipment used for amorphous silicon LCDs. This makes OLCD a cost-effective option for larger color video-rate displays. OLCD screens are ultra-thin (0.3mm) plastic displays that can be laminated directly onto curved surfaces to a radius of curvature of ten millimeters. 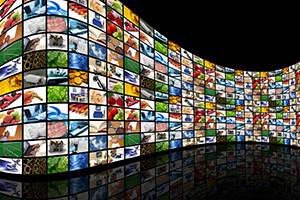 OLCD screens are ultra-thin (0.3mm) plastic displays that can be laminated directly onto curved surfaces to a radius of curvature of ten millimeters.

As with glass-based LCD, the lifetime of OLCD is independent of the display brightness, because it is achieved through transmission of a separate light source (the backlight), rather than emission of its own light. For example OLCD can be made ultra-bright for viewing in daylight conditions without affecting the display lifetime – an important requirement for studio displays.

The ability to wrap displays around studio set objects and configure them into more organic shapes is what free-form really means. TV studios can now have displays that can have video displayed on any surface, including pillars, curved walls and ceilings.

Today, glass displays are limited to straight or gently curved edges because of the challenges of handling glass with more complex shapes, whereas plastic OLCDs can be easily cut to exotic shapes using laser profiling. Once the display has been built, the plastic substrate can be gently released from the rigid carrier ensuring a simple, reliable high yield “release” process. The ability to cut plastic displays to shape offers an infinite degree of design freedom. For example, it is now possible to insert a physical hole in the middle of a display to create a “donut shape” display. Holes can be also added to fit around the functional design of the studio, for example, around knobs and switches.

Product designers want to design displays around the product, and not the other way round. “Free-form” means more than non-rectangular; it is the ability to integrate displays seamlessly into any 3D shaped surface. Only plastic displays can become truly free-form displays and wrapped around objects that have multiple axes and direction of curvature. 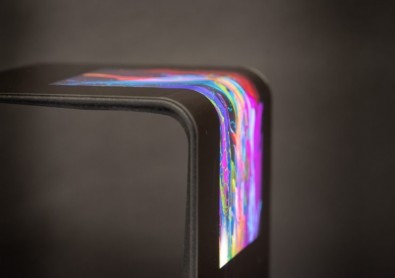 One supplier, UK-based FlexEnable, has designed a new type of material that can replace glass in electronic displays.

Several companies that have supported the mobile device industry for years are now experimenting with large-sized displays that are thin, lightweight and shatterproof. They say that unlike flexible OLED displays—which have already been adopted in smartphones and smartwatches,—OLCD opens up the use of flexible displays to a wider range of applications that could include broadcast studios. In fact, it has several attributes that make it better suited to digital signage than flexible OLED.

And, they say, OLCD is the lowest cost flexible display technology—at three to four times lower cost than flexible OLED. This is because OLCD display manufacturing uses organic rather than silicon-based thin film transistors (TFTs). Organic TFTs do not require as high a processing temperature as silicon-based TFTs, so the manufacturing process for OLCD displays has a significantly lower cost.

What about resolution, you say? The required pixel density of a display changes with both application and screen size. A six-inch phone display needs a pixel density of 490ppi to deliver 2K (2560×1440) and 368ppi for HD. This changes to 188ppi and 141ppi for a 15.6-inch notebook, or 53ppi and 40ppi for a 55-inch TV. Flexible OLCD displays can achieve the same resolutions and pixel densities as amorphous silicon glass LCD displays (350ppi), allowing 2K (and higher) resolutions. 2K resolution meets the needs of in-vehicle displays, for example, while 4K matches those of 15.6-inch notebooks, monitors, TVs, and digital signage.

The lifetime of an OLED display is closely linked to its brightness, with each doubling of brightness leading to a quartering of a lifetime and daily use problems such as image burn-in. OLCD technology uses a separate backlight, which allows high luminescence levels to be delivered without compromising the display lifetime; and unlike OLEDs, OLCDs aren’t prone to burn-in.

Lastly, OLCD has also been used in the fabrication of ultra-high contrast dual cell displays with true pixel level dimming, offering OLED-like performance. Due to these and other unique properties, OLCD has the potential to transform how and where displays are used in studio productions. It’s not a matter of if, it’s when costs come down and large displays become more mature.