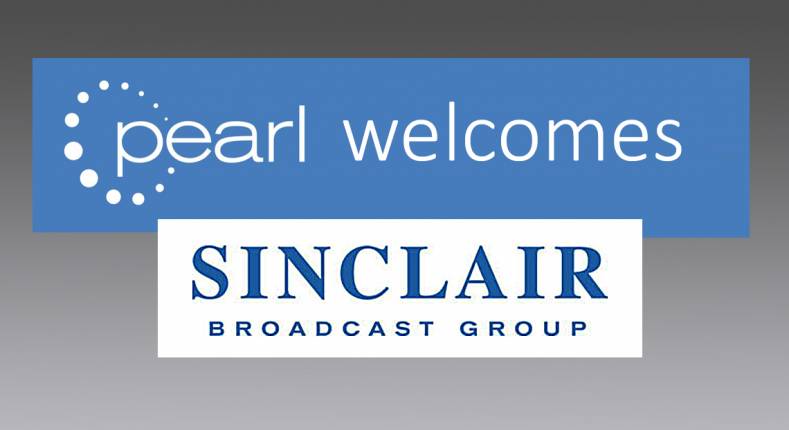 SBG stations boost the number of Pearl-member stations to nearly half of all local TV stations in the United States.

“We are very pleased that Sinclair is joining Pearl TV in commercialization efforts to offer consumers the new NEXTGEN TV services across the country.  The entire broadcast industry, including the TV networks and a large cross section of group owners, is committed to a successful roll out of ATSC 3.0.  This remarkable new technology gives broadcasters the ability to deliver to viewers the compelling benefits of NEXTGEN TV – greatly enhanced video and audio that allows local stations to bring together over-the-air with over-the-top content,” said Pearl TV Managing Director Anne Schelle.  Pearl is coordinating 11 local broadcasters that are working together in Arizona’s Phoenix Model Market, which is incubating the new TV services and testing with consumers.

“From the beginning, Sinclair has focused on the exceptional advantages of a fresh start in over-the-air broadcasting afforded by the introduction of ATSC 3.0,” said Chris Ripley, President & CEO of Sinclair. “That is why we have been invested in and committed to improving over-the-air broadcasting so that it can better compete in today’s marketplace. We are excited to link arms with Pearl to ensure that the coming transition to ATSC 3.0 can be both swift and achievable.”

Broadcasters working on the transition to NEXTGEN TV are excited about the plans announced at CES last month by LG Electronics, Samsung and Sony to launch 20 new NEXTGEN TV-enabled television models in 2020.  These will be the first consumer NEXTGEN TV receivers to be introduced in the U.S. market, as broadcasters sign on with ATSC 3.0 NEXTGEN TV signals in more and more cities.

The latest consumer research to come out of the Phoenix, Arizona Model Market confirms significant interest in NEXTGEN TV technology as consumers look for the next big development that can deliver even better audio and video to the home.

“We’re focused now on making NEXTGEN TV a reality in the key TV markets, and at launch we are planning the immediate availability of the technology to boost dialogue over background noise and normalize the audio levels so they are consistent program to program and eliminate extra effort required to watch TV,” Pearl TV’s Schelle said.

The launch of NEXTGEN TV, powered by ATSC 3.0, will greatly enhance over-the-air services for viewers, while bringing together broadcast and broadband functionality to give audiences more content and choice. NEXTGEN TV also provides groundbreaking opportunities for TV broadcasters interested in offering new features and serving new markets. Deployment of the new broadcast technology will provide information and entertainment to ATSC 3.0-equipped television receivers, to automobiles, and to other digital and mobile consumer devices.

Subject to final engineering and required approvals, consents and FCC license modifications, the participating broadcasters have identified the first stations that will convert to NEXTGEN TV service in this rollout. Primary broadcast programming currently broadcast on the stations slated for upgrade will be hosted by other stations in their respective markets.

The Pearl TV organization's roster includes many of the biggest TV groups in the US.