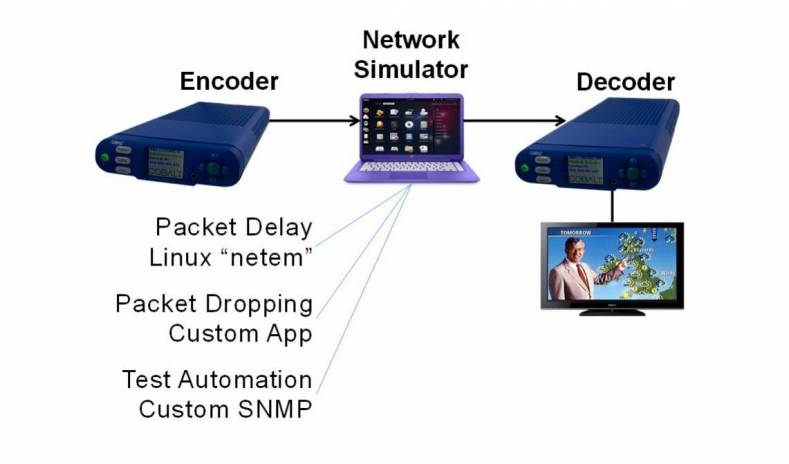 Testing and measurements were performed using a real-time encoder transmitting A/V content, a network simulator, and a real-time decoder.

Internet packets can be occasionally dropped, primarily due to instantaneous congestion in routers. Dropped packets need to be recovered for glitch-free video. Given enough time, any losses can be recovered, but contribution applications are typically latency-sensitive and can not ‘wait forever’.

The speed and reliability of the Internet has made it possible for broadcasters to use it as a cost-effective low-latency contribution link. Many companies have commercial products providing this functionality, and all these products are implemented as a variation of the Automatic Repeat reQuest (ARQ) protocol.

Many commercial products use ARQ with proprietary implementations that do not interoperate. To address that interoperability issue, the VSF formed the Reliable Internet Stream Transport (RIST) Activity Group in 2017 to create a common protocol specification. In October 2018, The VSF published the TR-06-1 RIST protocol specification to provide interoperability between products using ARQ, and successfully demonstrated it at IBC 2018.

The ARQ technique for packet recovery was devised in the 1960s and can be found in most computer networking textbooks.  In general, the protocol works as follows: 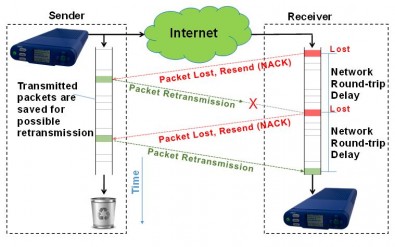 This example of two successive losses shows that when the ARQ receiver detects a packet loss, it requests a retransmission. At that point, it must wait for one network round-trip delay until that retransmission can possibly arrive. If it does not, then the packet may be requested again.

If we denote the maximum number of retransmission requests by R and the network round-trip delay in seconds by T, it follows that both the receiver and the sender must have a buffer enough to hold RT seconds of content, and that the added latency of the protocol is RT. By controlling R, it is possible to control the latency-reliability tradeoff of the protocol.

RIST selected the Real Time Transport Protocol (RTP) for the media transport. RTP is a very simple layer on top of UDP and provides sequence numbers (to detect packet loss) and timestamps (to remove network jitter, if required).  The use of RTP ensures that RIST-compliant systems can interoperate with non-RIST systems at a base level without packet loss recovery.

The RTP specification also requires that senders and receivers periodically transmit RTCP packets that are used for control.

In the receiver, RIST uses this mechanism to request retransmissions of lost packets. In the sender, the same mechanism is used to create and maintain state in firewalls along the path for the receiver messages.

Two types of retransmission request messages are defined. The Bitmask-Based Retransmission Request covers a range of 17 consecutive packets and can request any loss pattern within this range. The Range-Based Retransmission Request can request a continuous range of packets. Both types of requests can include multiple ranges. A RIST receiver may use either type of message, and a RIST sender will respond to both. An advanced RIST receiver may dynamically decide which message to use based on the loss pattern, thus optimizing the bandwidth utilization.

To ensure protocol stability, it is necessary for the receiver to differentiate between original packets and retransmissions.  RIST uses the SSRC field in the RTP header to make this differentiation, as recommended by RFC 4588.  However, unlike RFC 4588, the retransmitted packet is an exact copy of the original RTP packet, except for the data in the SSRC field.

RIST Simple Profile only requires that UDP ports P and P+1 be opened at the receive site firewall. The sender is configured to transmit to the public IP address at the receiving site. Flow from the sender to UDP port P is unidirectional and will contain the audio/video content, as shown in Figure 1.

Figure 1: Flow from the sender to UDP port P+1 establishes state in the firewalls along the path.

The receiver directs its Real-Time Control Protocol (RTCP) packets towards the source IP and UDP port of the traffic received in port P+1. The firewalls along the path treat these packets as a “response” to the sender RTCP packets, and forward them back along the path.

RIST Simple Profile supports multiple paths between the sender and the receiver.  This is applicable in the following scenarios that are not mutually exclusive:

In order to support re-ordering of packets, the RIST receiver needs to expand its buffer to include a Re-ordering Section prior to the retransmission buffer.  This Re-ordering Section can be seen as a 'grace period' for any packets still in flight to arrive.  A packet is deemed lost only if it does not arrive after this grace period.  In other words, packet loss is detected at the boundary between the re-ordering buffer and the retransmission buffer.

The use of a network simulator allows precise control of the network conditions.  The setup is shown in the diagram at the top of this article. The measurement parameters and procedure used were:

The test results are shown in the figure below, which indicates the safe operating region as a function of the packet losses.  The figure shows that a properly configured RIST system can safely operate with packet losses in excess of 30%. 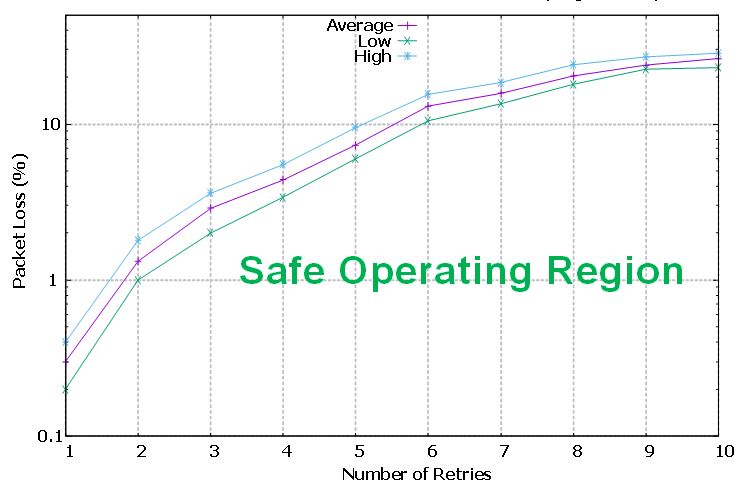 The results for 5-packet burst losses are similar to those for single-packet losses, especially in regard to the average behavior.  One artifact of this type of testing is that, to keep the same packet loss rate, burst losses must be less frequent, making recovery somewhat easier at the lower packet loss values.

In practical terms, there is only one reason why packets may arrive at the destination out-of-order: when there are multiple network paths between the source and the destination. Routers may classify and transmit packets based on priority, but packets belonging to the same flow should receive the same classification.

The presence of multiple paths may be intentional (e.g., bonding – multiple end-to-end paths), or something that happens in the network backbone, outside of the control of the user. Service providers will likely route most packets through the same path; this path may change over time, and out-of-order instances will happen at the changeover.

The cost of adding a Reorder Section to deal with out-of-order packets is added latency. The cost of not having a Reorder Section is bandwidth efficiency: The receiver may request the re-transmission of a packet that is still in flight and will arrive shortly.  Since packets have sequence numbers, receivers can identify and discard duplicates, so other than the waste of bandwidth, there is no other penalty.

What should be the size of the Reorder Section when the user has a single Internet connection for the sender and the receiver?  One can always measure and characterize their individual link, but the great majority of users will not have the capability to do so, and most providers do not have data on out-of-order packets.

In order to provide a recommendation, we rely on data from a paper by Jaiswal et al [1], where the authors characterized the out-of-order behavior of a number of Internet backbone links. They found that, on average, only 0.365% of the packets were out of order.  Therefore, in the absence of any additional data, it may be reasonable to simply not have a Reorder Section.  The penalty for that is a small increase in the re-transmission data.

When setting up a RIST Simple Profile link, the user must manually choose a few parameters to optimize the link.  Our recommendations are:

It is always recommended that a new link be monitored for an initial period to validate the settings. The recommended adjustments are:

This article describes RIST Simple Profile, whose main purpose is to recover from network packet loss. The RIST Activity Group is currently working on RIST Main Profile, which will include features such as tunneling, encryption, bandwidth optimization, and extensions for high bitrate operation. A demo of RIST Main Profile is planned for IBC 2019.