Once, while visiting NBC Television studios in Manhattan’s 30 Rockefeller Center, I saw an abandoned elevator shaft with seemingly miles of different cables laced together. I took notice because it was such a rare sight — with the maze of work quite intricate and, in a way, beautiful. 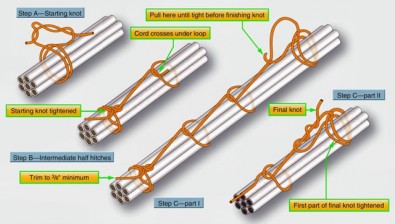 Cable lacing is definitely old school but it's been the method of choice for major broadcast facilities, stage rigging, CATV installers, NASA engineers, ships and aircrafts for many years. The reason is not just for esthetic, but professional installers know cable lacing lasts longer than cable ties.

The ability to manage any size cable bundle, from a couple of 22AWG wires to a fistful of heavy power cables, is often considered a lost art. The basic concept of lacing is to use a flat cord to tie the cable bundle together. It is easy to learn and users will be lacing projects in no time.

Cable lacing is simply a method for tying wiring harnesses and cable looms. This old cable management technique, taught to generations of linemen, is still used in some modern applications since it does not create obstructions along the length of the cable. Avoided are the handling problems of cables groomed by plastic or hook-and-loop cable ties.

Cable lacing uses a thin cord, traditionally made of waxed linen, to bind together a group of cables using a series of running lock-stitches. Flat lacing tapes made of modern materials such as nylon, polyester, Teflon, fiberglass and Nomex are also available with a variety of coatings to improve knot holding.

The lacing begins and ends with a whipping or other knot to secure the free ends. Wraps are spaced relative to the overall harness diameter to maintain the wiring in a tight, neat bundle. The ends are then neatly trimmed.

In addition to continuous or running lacing, there are a variety of lacing patterns used in different circumstances. In some cases stand-alone knots called spot ties are also used. For lashing large cables and cable bundles to support structures, there are two named cable lacing styles: the "Chicago stitch" and "Kansas City stitch."

Some organizations have in-house standards to which cable lacing must conform, for example NASA specifies its cable lacing techniques in chapter 9 of NASA-STD-8739.4.

Check out this lacing guide from Techflex. 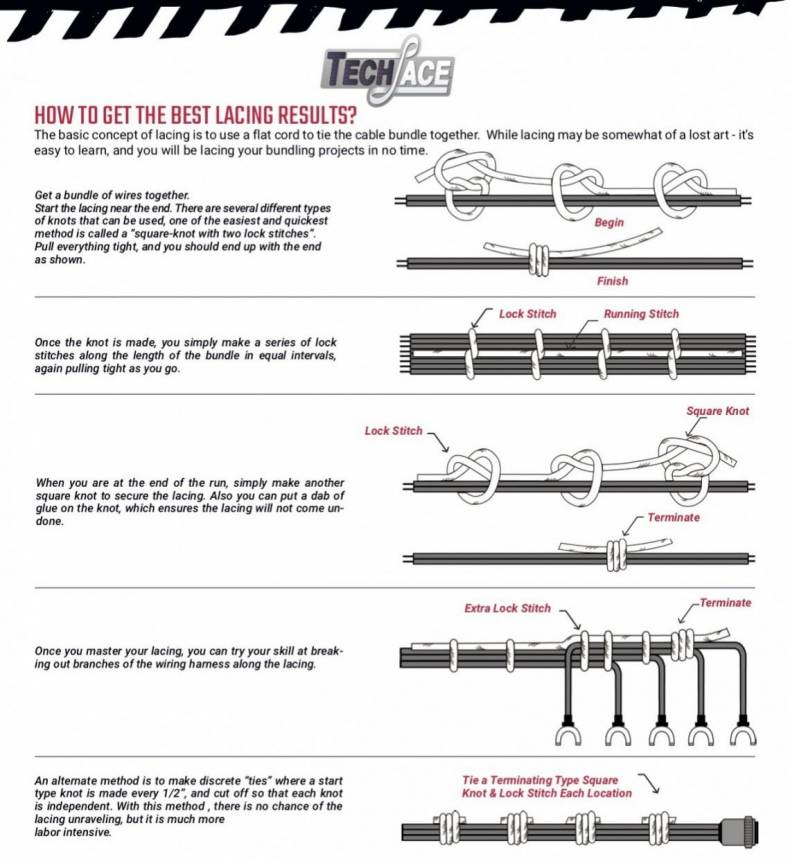