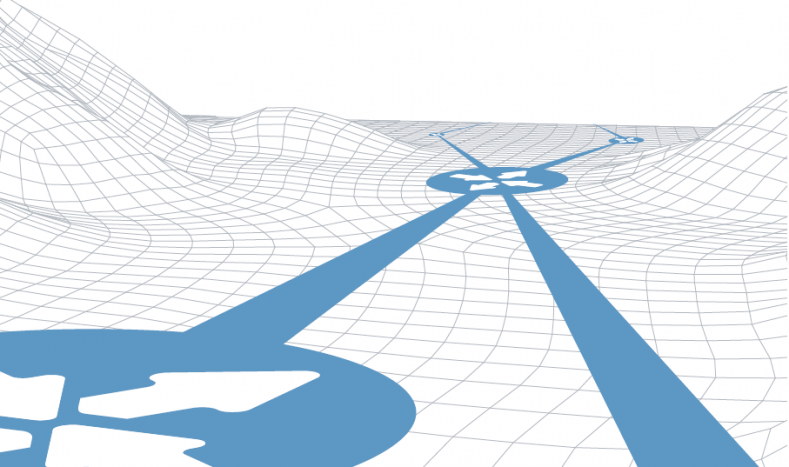 Moving media over IP networks affords many advantages over SDI. Engineers need to plan carefully to maximize the benefits.

The adoption of IP technology across the whole broadcast workflow is now well underway. IP has already been used for many years for the purposes of broadcast contribution over wide area networks (WANs). The technology is now also beginning to be used in local area network (LAN) environments for transporting broadcast signals within studio and campus facilities.

When adopting new technology, it’s easy to fall into the trap of thinking too much about products – and not enough about other elements such as infrastructure and control. This is certainly the case when it comes to IP migration in the broadcast industry.

IP technology can make use of existing infrastructure and many see this as a chance to avoid a major upheaval. However, to do this is to miss an opportunity to truly optimize investment in IP. For that reason, the initial focus should be on getting the network architecture and the control right. 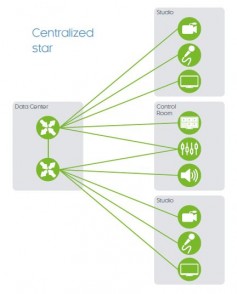 The most common broadcast network used today is what is known as a centralized star network. The architecture is similar to that used for an SDI infrastructure as connections transit through a central large IP router (click to enlarge).

In architecture terms, the tendency for most broadcasters is to adopt what is known as a centralized star network. This approach is consistent with the traditional baseband architecture — all connections transit through a large IP router that can be located in the master control room (MCR).

The main disadvantage is that there is no signal aggregation at the edge: everything needs to travel to the central router. That means fibers need to be laid to connect every single device to the central router – an expensive process, because of complex fiber management and poor utilization of the fiber infrastructure.

Another issue is scalability. To cater for the highest demand and anticipate future needs, broadcasters must purchase an oversized router from the outset. Capacity is often reached sooner than anticipated, which then necessitates the replacement of the central router.

A further disadvantage is that every connected device occupies one expensive high-bandwidth port on the central router, regardless of actual bandwidth requirement. This makes the cost-per-port for low bandwidth devices high.

Moreover, the lack of aggregation means redundancy needs to be handled by the edge devices. This requires devices to have two connections to the central router, or one to each of the main and backup switches, which is expensive and not always possible (many devices only have one port). Finally, a star network architecture is not inherently suitable for treating remote locations as extensions of the main location, as it assumes all traffic will transit through the central router.

Star networks may appear at first to be simple and convenient, but in practice are highly-limiting, potentially vulnerable and likely to be expensive. 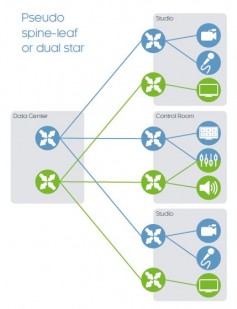 A spine-leaf network architecture offers built-in redundancy for devices, and does so at a lower cost than other solutions. The design also provides good flexibility and scalability (click to enlarge).

Large data centers often use an established distributed IP network approach, known as a spine-leaf architecture. This involves two or more routers at the core (spine) and other smaller routers at the edge (leaf).

By connecting all the equipment in each area to aggregating leaf routers, and then connecting these to the main routers, broadcasters reduce the number of connections going directly to the main routers, leading to simplified fiber management. Fewer fibers also mean fewer ports are needed on the central router(s), and a more effective cost-per-port, especially for low bandwidth devices.

The spine-leaf architecture makes it easy to build redundancy into the network for all devices at a much lower cost. This approach also provides optimal flexibility and scalability. Capacity can be increased by adding leaf or spine routers, rather than replacing existing ones wholesale – as is the case with star networks. This also means that networks don’t need to be oversized from the outset as capacity can be added over time.

While the layout of a true spine-leaf architecture can be more complex than other approaches, it is a scalable, resilient and high-performance network structure perfectly suited to the needs of broadcasters.

This third architecture model is what some might call a spine-leaf, but in reality, it is a ‘dual star’ architecture model. While it still involves the use of two spine routers, each leaf in the network is only connected to one of the spines.

This solution is not flexible when it comes to load distribution and optimization of total network capacity. As the network evolves, this pseudo spine-leaf approach puts special requirements on end devices that need redundant connections. It also suffers from redundancy issues: if one of the central routers goes down, a large portion of the overall connections is lost.

The proponents of this architecture usually favor automatic protocol-based routing rather than Software Defined Networking (SDN). From that perspective, the dual star has one big advantage: it does not have any network loops – something that automated control finds difficult to cope with. But this issue with automated control does not make the dual star the better option overall.

While a pseudo spine-leaf might be initially more appealing due to the simplicity in configuring it, only a true spine-leaf architecture enables broadcasters to get the most out of their IP infrastructure investment in their facilities.

In tandem with the network architecture, broadcasters also need to orchestrate and control the IP media network. Typically, there are two main ways of controlling how signals and connections are routed in an IP network: automatic routing and SDN. 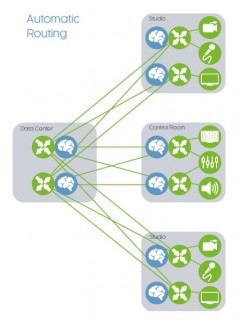 An automatic routing network design moves the decisions on handling media flows to the network, rather than the operator. Even so, this solution suffers from performance disadvantages when applied to media systems (click to enlarge).

The protocols that typical IP switches run (e.g. IGMP/PIM) enable the network elements to make decisions about routing based on the IP traffic. This means the decision of how to transport individual media flows across the network can be left to the network, rather than the operator. This is what is more commonly known as automatic routing.

While automatic routing, and the IGMP and PIM protocols, are used widely in IP networks across the world, they have disadvantages when it comes to professional real-time media production networks.

Performance is a major issue: automatic routing may not be fast enough to deliver the significant number of simultaneous switching events required in live production. Automatic routing can also get into trouble with networks where loops exist. This can be fixed by applying sophisticated automatic routing configurations in each network element, but it will lead to higher operational complexity.

In addition, the switch fabric typically does not handle bandwidth management. This means that, unless care is taken in designing and controlling the network, there is a risk of oversubscribing it. This could cause instability and drop-outs of signals.

On top of this, there are also concerns around protection and security, as streams to destinations are not explicitly controlled, which means potentially any destination could subscribe to a multicast — including ‘rogue’ equipment.

Most of these problems can be overcome by IP network experts (e.g. from switch vendors), but their help will be needed every time there is a significant change in configuration, e.g. new studios added or large number of cameras moved from one location to another. This adds costs and creates delays. 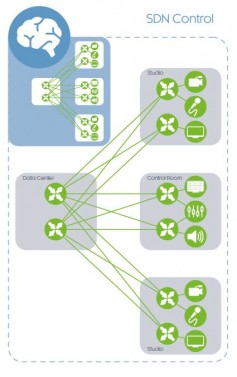 A software-designed network puts routing control in the hands of a centralized control layer. This enables management and orchestration software to make routing decisions (click to enlarge).

The concept of SDN is about putting routing control in the hands of a centralized control layer.

With SDN, the management and orchestration software holds a complete view of the available equipment, the network infrastructure and the services: both those in place today and those planned. Thanks to this, it can efficiently make intelligent decisions on routing and controlling flows. It can also provide the explicit routing capability that broadcasters expect and need.

There are many advantages to opting for an SDN routing approach. First, it guarantees a higher level of performance when compared to automatic routing. The software is also in control of every media flow, which means it is more aware of, and better at dealing with, existing and even planned bandwidth requirements. It is even beneficial from a protection and security perspective. The orchestration and control software can easily create path diversity to protect failures, and can also fully control which destination is allowed to receive which multicast from a given source, thereby reducing security risk.

Unlike automated routing, SDN can, with the right software, easily handle any network architecture. It certainly emerges as the control of choice for the creation of truly flexible, scalable and high-performance IP media networks.

After considering all options, a true spine-leaf model with SDN routing for control is the best fit for IP technology. Restructuring infrastructure may bring its own upheavals, but ultimately, it will help deliver faster return on investment and greater operational success. 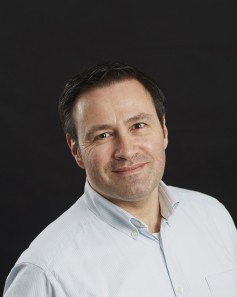