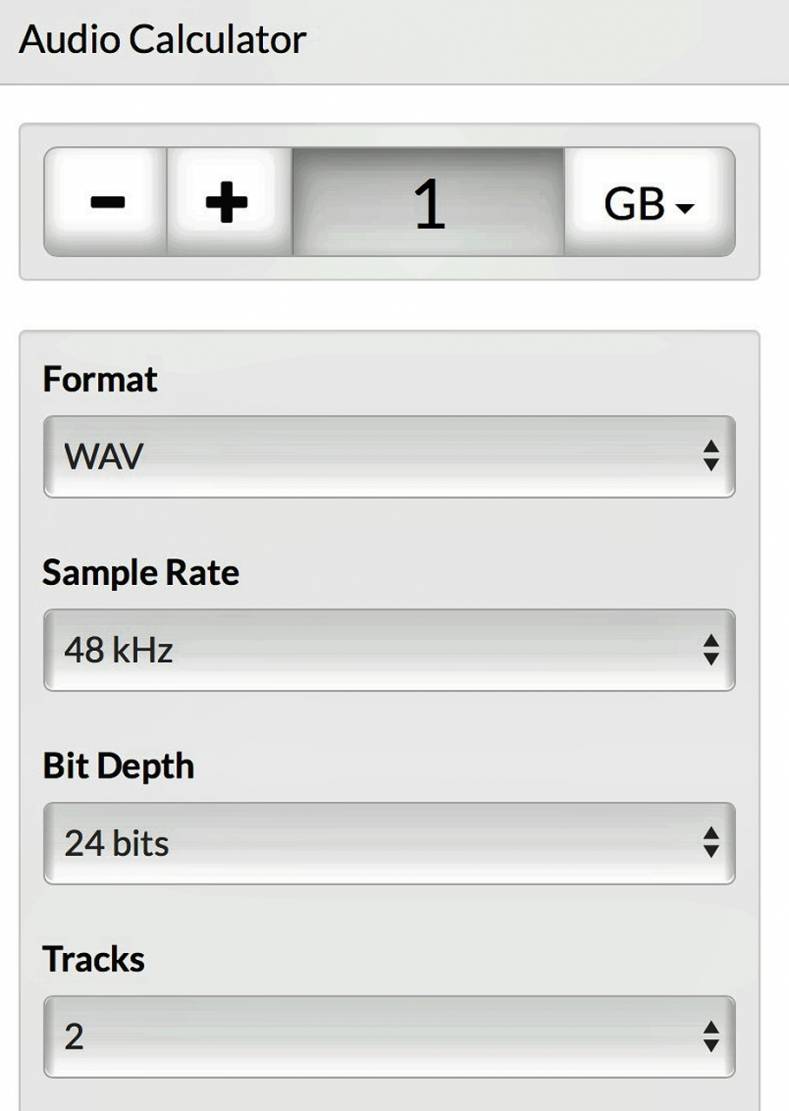 Before we entered the world of file-based digital recording, planning storage needs for audio was simple. We’d simply buy enough audio tape to cover the recording time and then record the sound. In the world of analog, we knew a seven-inch tape reel at 7-1/2 ips lasted 33 minutes, while a 120 minute DAT tape lasted 120 minutes. Simple enough.

On using it, here are a few notes. Most storage medium now quote capacity in GB using SI units. Uncompressed digital audio is expressed numerically by two measurements, bit depth and sampling frequency, such as 16-bit/48 kHz. These two numbers are used to compute the data rate of uncompressed audio.

Bit depth defines the digital "word length" used to represent a given sample. Bit depth correlates to the maximum dynamic range that can be represented by the digital signal. Larger bit depths theoretically yield more dynamic range. As bit depth increases, the amount of data it represents increases exponentially.

The majority of field recording is done with 16-bit audio, therefore, each sample is represented by a digital word of 2^16 (65,536) possible values. 24-bit audio has a word length of 2^24 (16.7 million) possible values per sample.

The sampling frequency is expressed in samples per second (in Hz) and defines the number of times in a second that the analog audio signal has been measured. Sampling frequency determines the audio bandwidth, or frequency response, that can be represented by the digital signal.

Higher sampling frequencies theoretically yield wider audio bandwidth. For example, the DV25 format can sample at 48, 44.1 or 32 kHz. At its highest sample rate, each second of audio is made up of 48,000 samples.

When digital audio is compressed using some form of lossy, perceptual process such as MPEG2-Layer3 (MP3 audio), Windows Media encoding (WMA), ATRAC encoding (used in MiniDisc), AAC (MPEG-4 audio) or others, it can have a significant reduction in its data rate. Compressed audio has enabled the practical distribution of audio over the low speed data pathways.