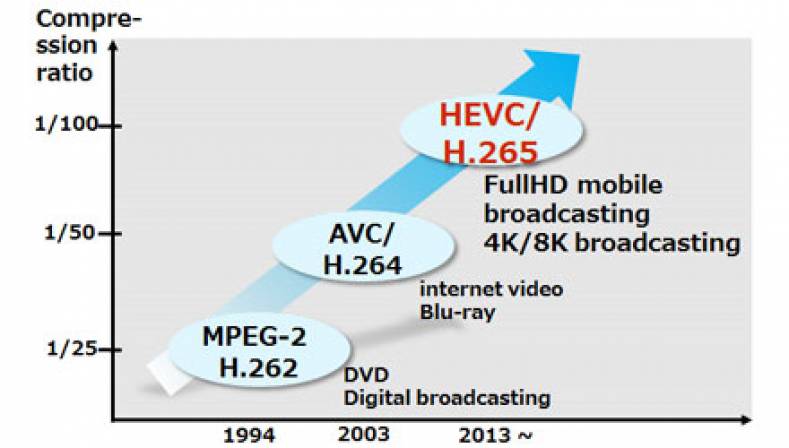 While it’s clear that High Efficiency Video Coding (HEVC) is superior in compression performance to its AVC predecessor codec format, getting the essential patent holders of the standard to agree on royalty terms for use has proved to be far more complicated. This, in turn, has led to delayed deployments among many content distributors that fear a financial hardship could be assessed if royalties are not properly paid.

HEVC, also known as H.265 and MPEG-H Part 2, is a video compression standard, that claims 50 percent reduction in file size while using far less processing power. For an organization to implement it into its workflow, royalty terms must he paid to third-party organizations that have developed patent pools—that is, a group of companies or individuals that hold the patents to how HEVC works.

Currently, HEVC compression is used in products that encode and decode video for Internet, television and mobile transmission, reception and use such as mobile handsets, set-top boxes, 4K Blu-ray players, game consoles and media streaming devices.

The issue has apparently come down to the different companies putting their trust in different patent pools.

Velos Media brings together several leading global innovators that cumulatively have made the most significant contributions to HEVC technology,” said Fred Telecky, President, at Velos Media. “These innovators have carefully considered the importance of HEVC technology to the future of viewing and have placed their trust in Velos Media to license their technology and best ensure its benefits are realized and adopted by consumers.”

“Whether patent holders decide to join a pool license is an independent, voluntary decision on their part,” said MPEG LA spokesman Tom O’Reilly. “And if they do, it is not unprecedented for there to be more than one patent pool.”

As an example, Samsung Electronics has become both a Licensor and Licensee of the HEVC Advance HEVC/H.265 Licensing Program as well as a member of MPEG LA’s patent pool.

According to O’Reilly, a pool license is offered as a market convenience allowing licensees to receive coverage under as many patents as possible in a single license as an alternative to negotiating separate licenses with the individual patent owners. And even where there is only one pool license, there can be no assurance that all essential patent holders and their patents are included. He also added that a pool license is designed to assist users in averting the risk of being sued by patent holders.

Under MPEG LA’s HEVC License, royalties are paid on HEVC Products sold to end users for the right to make, sell and use the product. Therefore, an end product seller that complies with the terms of MPEG LA’s HEVC License need not worry about being sued for their use of the HEVC Standard by MPEG LA’s Licensors.

MPEG LA said it welcomes any party that owns patents that are essential to the HEVC standard, including those that may have joined other patent pools, to submit them for an evaluation of their essentiality by MPEG LA’s patent experts and inclusion in MPEG LA’s License if determined to be essential. To date 15 Licensors have been added to MPEG LA’s HEVC License since it was first offered, bringing the present total to 38 Licensors, including the market’s largest HEVC suppliers who are themselves licensees to the pool license according to the same terms as all other licensees.

In the case of its HEVC License, MPEG LA issued a call for patents in June 2012 inviting any party that believes it has patents that are essential to the HEVC Standard to submit them in order to participate in the initial facilitation effort for the creation of a joint HEVC License. Meetings were held among eligible patent holders to decide terms of license, and the License was first offered in September 2014.

On September 29, 2014, MPEG LA announced their HEVC license terms, which covered the essential patents from 23 companies at the time. The first 100,000 "devices" (which includes software implementations) are royalty free, and after that the fee is $0.20 per device up to an annual cap of $25 million. MPEG LA does not charge any fee on the content itself, and the license has been expanded to include the profiles in version 2 of the HEVC standard.

At the time several prominent companies Dolby Labs, GE, Mitsubishi Electric, MediaTek (through HFI Inc.) and Philips all decided to form their own patent pool and called it HEVC Advance. It was officially announced on March 26, 2015. The terms of its license, covering 500 essential patents, were announced on July 22, 2015, with rates that depend on the country of sale, type of device, HEVC profile, HEVC extensions, and HEVC optional features. Unlike the MPEG LA terms, HEVC Advance reintroduced license fees on content encoded with HEVC, through a revenue sharing fee.

On December 18, 2015, HEVC Advance announced changes in the royalty rates, following protests from end users citing excessive payments. The changes include a reduction in the maximum royalty rate for Region 1 countries to $2.03 per device, the creation of annual royalty caps, and a waiving of royalties on content that is free to end users. The HEVC Advance’s annual royalty caps for a company is $40 million for devices, $5 million for content, and $2 million for optional features.

For its part, Velos Media has not publicly published its terms, although on March 31, 2017, it did announce the launch of an independent licensing platform for HEVC. A press release at the time stated: “With Velos Media, companies delivering the HEVC experience now have easy and efficient access to the entire portfolio of standard-essential HEVC patents from leading technology innovators that have made many of the most important contributions to the HEVC standard.

When pressed for comment on its royalty rates for this article, Velos’s Telecky said, “We have established a pricing model that rewards innovation investment and reduces uncertainty in bringing new H.265 devices to market. We don’t plan to publish our royalty rates at this point.”

Telecky said that over the past year they have licensed “many companies” that are utilizing H.265 in their products and paying royalties. Meanwhile, MPEG LA lists more than 200 licensees and HEVC Advance claims 45.

The main concern is that time could be running out on HEVC. Besides a lack of widespread deployment of HEVC products, the emergence of newer generation codecs like AV-1—which is set to be released sometime in 2020 and promises better performance—could result in H.265 being passed over. However, representatives for each of the patent pools don’t seem to be that concerned.

“Whether and when to use particular standards and other technologies are independent decisions made by individual users in their own independent discretion based on numerous factors,” MPEG LA said. “MPEG LA’s service is to offer a convenient one-stop licensing alternative for the technologies they choose. MPEG LA does not favor, promote, advise or advocate for the use of particular technologies.”

“We envision H.265 having a long life and in fact are seeing many new products that are adopting the technology, beyond the traditional ‘screen’ devices like TVs, laptops and smartphones,” Velos’s Telecky said. “For instance, devices that generate video, have video streaming or use high definition video as a main component of their use case, such as surveillance, dash cams and drones are utilizing the benefits of the H.265 technology.”

End sellers of HEVC technology are encouraged to seek out these patent pool companies and learn more about what the royalties and use cases entail. Likewise, patent holders of essential HEVC technology, including those that may have joined one of the patent pools—are also urged to submit their technology for evaluation and eventual inclusion if determined to be essential.