With the proliferation of streaming services and a younger generation’s insatiable demand for content whenever they want to watch it, it was only a matter of time before viewing numbers for the living room television dropped. That time has arrived, and a bit sooner than many predicted.

Nielsen, the program ratings organization, said in its latest report that traditional television viewership is down 4 percent from the third quarter of 2013 to the third quarter of this year. Again, most of that erosion has come as a result of viewers using more streaming services, on demand platforms and digital devices to consume content.

In its new quarterly report, entitled, "Total Audience Report,” Nielsen said it has found that live television consumption dropped from four hours and 44 minutes a day in Q3 of 2013 to four hours and 32 minutes a day in Q3 of this year.“While we are not seeing a departure from media content consumption, we do see a shift in consumer behavior and today we see a resounding growth in consumption on digital platforms,” Dounia Turrill, senior vice president, insights, at Nielsen, wrote in the report. “The growing penetration of new devices and the popularity of subscription-based streaming services, time shifting and over-the-top viewing—as well as cord-cutting and cord shaving—are fundamentally changing the TV industry.” 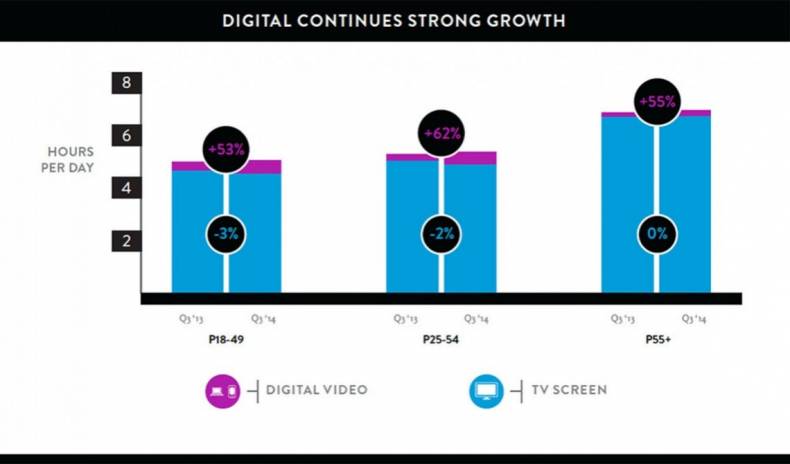 Monthly viewership over the two quarters was apparently down as well: from 147 hours to 141 hours. Those losses were offset by a two-minute rise in “time shifted” viewing, as well as increased viewing on digital devices, like smart phones and tablets. There was also a 19 percent rise in subscription video on demand.

With the move to broadband services, consumers are increasingly cutting their video subscription, but keeping their data service. In fact, Nielsen said 2.8 percent of U.S. households are now “broadband only.” In 2013 that figure was at about 1.1 percent.

The Nielsen report also states that 2014 has seen a larger decline in traditional linear TV viewing than any previous year.

The “Total Audience Report” is Nielsen’s new name for its “Cross Platform Report,” reflecting new marketplace realities. Nielsen’s Turrill said despite the name change, the report “continues to be part of our ongoing efforts to provide more insights into the consumer’s media consumption and experience as they navigate through their content.”